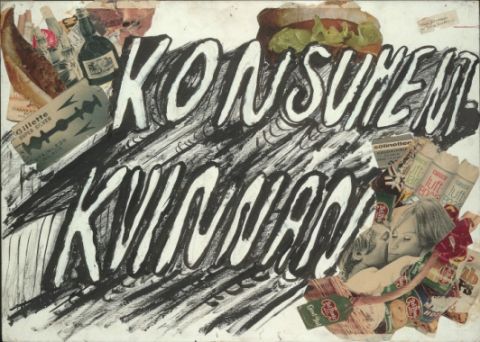 ‘Spectacular Times’ is an exploration of art in the 1960’s, highlighting certain aspects of the American, French and Swedish art scene. The title refers to Guy Debord’s ‘Society of the Spectacle’ (1967) but it also implies that the 60’s is a by-gone era; time to look at it with nostalgia. In his book, Debord criticises our commercial, mass-media society, born out of capitalist ideology, where the flow of images and commodities have numbed our senses. The exhibition is an exploration of the role that ‘the Spectacle’ 1 had in the arts of the 60’s.

All of the artists included in the exhibition are a product of the ‘Society of the Spectacle’; but there are different approaches to it. Many are criticising it; most explicitly Lena Svedberg with her “Consumer Woman” of 1968 – a comic strip that shows Mrs. K, a woman who lives her life in front of, and through, her television. Others are appropriating the spectacle; Carolee Schneeman builds on the spectacle of the female body, but instead of commodifying it she is releasing it from the patriarchal gaze, ‘giving it back’ to women to enjoy. And then there are those who indulge in the spectacle; or rather those who obsess and excess with materiality to catch something unrepresentable, something sublime – like Yves Klein with his International Klein Blue paintings/sculptures.

The exhibition claims to explore what Allan Kaprow (in 1958) called “a new art for a new time”, and the strong voices of change that came with it, but it is with a certain sadness that one notes the failure of 60’s artists, thinkers and activists to change anything – are we now living in their dystopia?