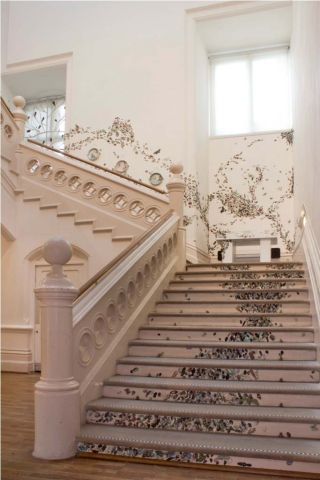 Stirring the Swarm was a large scale installation sited in the imposing south stairwell of Nottingham Castle. This was the first solo exhibition by Anna Collette Hunt, who was awarded the 2010 Nottingham Open grand prize. Stumbling across the installation, I found it at first difficult to decipher the clusters of tiny objects that littered the gallery stairwell and crept along its walls. As I set foot on the staircase it was clear that what first appeared like seashells or crusted barnacles, was in fact a sprawling mass of 10,000 painstakingly crafted ceramic insects, escapees from a nearby broken specimen case. These life-size ceramic reproductions of dragonflies, butterflies and many types of beetle were arranged in swoops, loops and lines, giving the impression of skimming the walls and skirting other objects in their path. Taking influence from entomology, history and literature, Hunt’s ambitious installation in this ‘in-between’ space was visually rich and more conceptually complex than it first appeared.

The project was developed over a period of time by Hunt with help from a number of assistants, working with white earthenware clay pressed into moulds to pick up the intricate form and texture of each modelled insect. After firing and glazing the resulting specimens were far from perfect: sometimes misshapen or with missing wings and broken legs. This, along with Hunt’s dull, heavy colour palette reinforced the crusted, decaying feel of the exhibition and prevented it from simply being beautiful. However, the use of fragile materials and the considered placement of every small object made the exhibition remarkably delicate and light. It struck me that it was a particularly brave decision to place ceramics so close to the enquiring hands and careless footsteps of visitors. Hunt’s use of materials is also significant as she is not from a Fine Art background as you might expect given the nature and size of this installation. Instead, she is a 2009 graduate of Nottingham Trent University’s Decorative Arts course. Hunt honed and stretched her skills in her chosen medium, to present an ambitious, labour-intensive and distinctive exhibition, which feels reminiscent of the complex, pattern-based and socially inspired work of Catherine Bertola.

It is clear from the evocative title alone, that there were dark narrative overtones to the exhibition. Hunt has drawn from both fairytale and nightmare scenarios, and after all, the exhibition is sited inside a castle. A number of her intricate ceramic Wall Dishes series were incorporated into the installation and these visually echoed the decorative circular cut outs of the gallery staircase. In the same way that a stage set can suggest another time and place through simple props, these Wall Dishes were suggestive of an alternative environment entirely separate from the gallery. In Hunt’s case, she was consciously referencing some of the fading historical splendour of old manor houses with their inherent collections of objects, such as Calke Abbey in Derbyshire. Much of Hunt’s wider practice takes direct inspiration from, and is often titled after, such buildings and collections. Stirring the Swarm took its main reference point from Wollaton Hall, which houses Nottingham’s natural history collection, rooting the exhibition in the history of the local area and its museum collections. Indeed, some of the green and gold glazing on Hunt’s beetles references a particular flocked wallpaper within Wollaton Hall.

The premise of the exhibition seemed simple, yet Stirring the Swarm was multi-layered and complex. It’s success resided in the tension between frenetic activity and stillness, in tiny details, in Hunt’s unexpected use of materials, dark overtones, and the straightforward impact of thousands of tiny multiples within the space. The exhibition was at once both exquisitely beautiful and deeply repulsive, and this strange duality was fascinating. However, call me greedy but I wanted more than 10,000 insects: more impact, more drama. The swarm of insects was on a journey in this transitional space which lead to nowhere. Conceptually this was interesting, but I would have loved the swarm to have continued on past the staircase, and to have filtered out and occupied other spaces in the gallery. 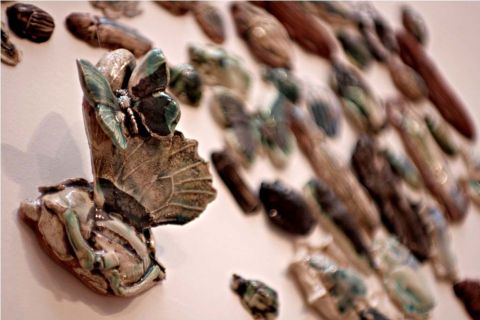