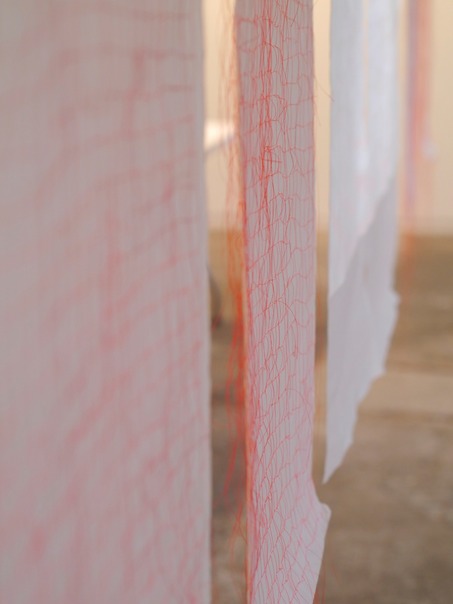 The scrolls hang gracefully from a line down the centre of the room, giving access to both sides, passing by causes movement. It looks almost like washing waiting to dry but the sheets are made of paper and close-up they have been painstakingly stitched in a grid-like pattern with red thread. The washing-line is an industrial looking metal hawser wire and the pegs professional, magnetic clips. The women who made the scrolls have submitted themselves to hours of repetitive, useless stitching, so it would be convenient to think of them collectively as a sewing circle, women coming together to stitch and gossip. And there are precedents for work like this with Tracy Emin’s early quilt making, and on a grander scale, Sophie Calle’s Take Care of Yourself 2007.
But the women who stitched the scrolls, are wearing boiler suits, neatly subverting a purely domestic interpretation and read instead, as professional, less feminine, jobbing artists that mean business. Even so, talking together in animated clusters, with their handbags slung across shoulders, there is something very female about the way they are or have become friends through this collaboration. And they clearly express attachment to the work in the way they talk about it, claiming authorship here and apologising for mistakes there.
The stitching is calligraphically revealing of its process, and the work becomes a repository for things like; handedness, hand pressure, play, speed, tiredness, mistakes even boredom. And it is the mistakes particularly, that make the scrolls beautiful also the unfinished parts and gorgeous red, side-fringe of loose ends, which lends the gravitas of ancient manuscripts. In the midst of the scrolls a film of the making, in close-up, adds a rhythmic and repetitive dance of hands and accompanying choral chatter of women making.
Although the original exhibition at Limbo in Margate has finished, there are plans for the work to tour.

‘Clare Smith’s work embodies process and emphasizes the importance of making. Her choice of materials is informed by her mixed Chinese/English cultural heritage.’