Stories of, not the Street, but the Earth - a-n The Artists Information Company 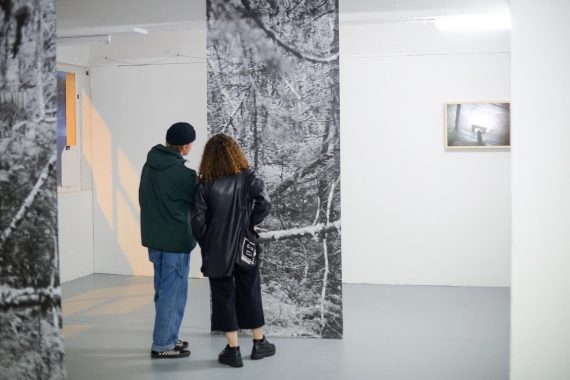 When existing in industrial locations like Birmingham, it becomes easy to feel alien to the sublimity of natural spaces, having become so accustomed to the careful civic curation of carefully controlled green environments amidst concrete. Shore, an exhibition produced by Stryx gallery in partnership with Manif D’Art, facilitate the experience of the human self in connection with the Earth.

Shore relocates three projects by Canadian artists featured in 2019’s Quebec Biennial Manif D’Art 9 in Digbeth. The Biennial, entitled Small Between The Stars, Large Against The Sky (a paraphrase of Leonard Cohen’s Stories of the Street) was curated by Ikon Gallery’s director Jonathan Watkins and considered the relationship between humanity and their organic surroundings.

Much like Cohen’s words, the exhibition is full of disorientation of spaces; Insides and outsides, nears and fars, histories and futures, biggers and smallers, expansions and contractions. 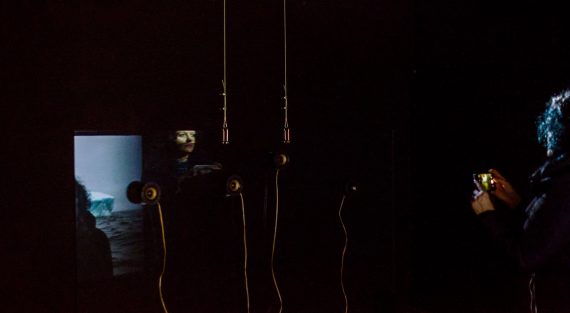 The gallery is submerged in the sound of dripping, melting, drifting icy sea. This sound travels and trickles down the concrete stairs and welcomes you to the exhibition. Inhabiting the gallery’s dark space, The Sound Of Icebergs is an installation by Caroline Gagné which surrounds the viewer with moving image and sound, creating a humbling experience of vast natural body and open air. Although already noticeably cold, as perhaps is expected during a December visit to an artist-led space, the gallery’s temperature drops with the sound of the iceberg. The sound sculpts our bodily responses, goose bumps, red noses, visible breath, as we find ourselves inside a building with other people yet alone and adrift and unimportant under Cohen’s stars.

In the midst of a society asserting climate change as a factual emergency, we stand in the presence of the iceberg, a seemingly unchanging entity, aware of the continuous changes which the video does not reveal. The iceberg is a body in a state of transformation; A solid object becoming liquid and, though peaceful in its manifestation within the gallery, unrested and disturbed by our human presence. 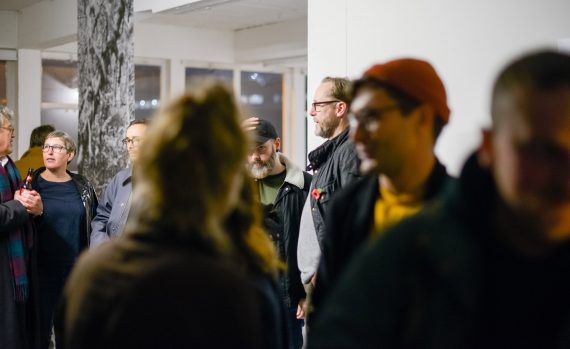 Passing an image of the cliffs of Pakuashipi on the dividing corner of the space, we come ashore from the iceberg. Anne-Marie Proulx’s work Terres Éloquentes negotiates a minimal landscape within the gallery space. Whilst Gagné’s installation takes us to the frozen (yet depleting) ocean, a phenomenon not experienced in the Midlands of Britain, Proulx surrounds us with the more familiar forest. Photographs filled with branches and draped from ceiling to floor dictate a non-linear pathway to the central point of this work, in which we find an intimate conversation about the ancestral pedagogies of the tent, taking pitch in the corner of the gallery. The conversation, surrounding a lit candle and whispered in the shelter of a backlit image of a fabric roof, is spoken in French with subtitling of select portions, allowing a wonderful ebb and flow of understanding as the viewer drifts in and out of translation. This is where we find ourselves large against the sky: a ritual of humble rest and co-existence with the Earth, framed by the traditional practices of our native ancestors. Here, we are no longer thinking about how insignificant we are but instead how the ground feels beneath our feet.

Whilst I’m a creature of comfort and thus a firm believer that any art viewing experience can be enhanced with tea, this particular installation felt alive when accompanied by my travel mug. Alone in a winter-cold room, surrounded by white walls and the murmur of ice leaking from the rest of the space, with my hands around warm, nourishing tea, I felt wholly outside in this inside environment.

Stryx as a space has become the inversion of a tent; Whilst the tent acts as a pod of indoors amidst the outdoors, this space became a capsule of the organic outdoors, on the opposite side of the world, within a warehouse in industrial Birmingham. 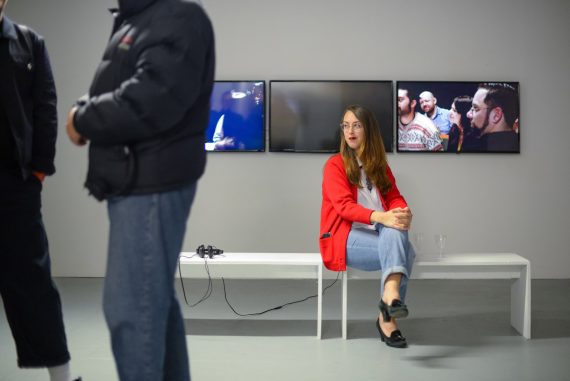 Drawing these environmental experiences together, Nadia Myre’s three panel video Living With Contradiction invites us into a discussion between artist/makers about our responsibilities towards indigenous objects. The themes of this conversation are important in both contemporary conservation and making: How does the death of an object occur within its lifecycle?

The discussion highlights the shame of our romanticism, as we are guided to preserve made objects by imaginary acts to educate future bodies. In this act, we romanticise the interactions of generations yet ignore the more spiritual romanticism in giving respect to the object. A call for radical care in the act of retiring ancestral objects, reconsiders what is described within the conversation as the “cult of preservation”. This is a cult which separates us from the object, fearful of the living and how it may change the transportation of an artefact from the present to the future. The indigenous critique of the museum helps us to acknowledge that objects which should naturally return to the environment at the end of their lifecycle are interrupted by colonial collection activities, placing them in unnatural environments in an effort to curb degradation and administer an unspiritual immortality.

As artist/makers, we are already shifting to considering the death of our objects as we begin to move towards more environmentally friendly materials and processes in contemporary practices. An awareness of the ethical implications of materials like plastics has led us to a revitalising new generation of material culture, in which alternatives to craft items such as glitter are manufactured based on a previously unconsidered ecological merit. We make conscious effort to create objects which specifically can degrade and return to the Earth.

In conversations about ancestral behaviours, I often find myself thinking about how we as humans are naturally nomadic beings. As mindfulness towards climate change increases, we are seeing a contemporary revival of nomadic practices and instinctual nourishment, incentivised by the effects of otherwise capitalistic behaviour. We carry bags prepared with daily resources on our backs, fill containers with food each morning to provide for a day out of the home and carry reusable water bottles and forage for refill stations. In an era where technological advancement means that we can order and receive new items within 24 hours, we are now returning to our wandering nature as a positive contribution to a planet which has suffered under our evolution.

Perhaps then, the artists of Shore collectively show us that the romanticism of preservation is shifting away from the colonial ideologies of the museum collection, instead featuring in our maintenance of the Earth. Replacing actions implemented to protect the man-made past, our collective attention has turned to more primal gestures which protect the future of the ecosystem which surrounds us.

Shore will be open Thursday – Saturday until 20th December.

All images courtesy of Marcin Sz.