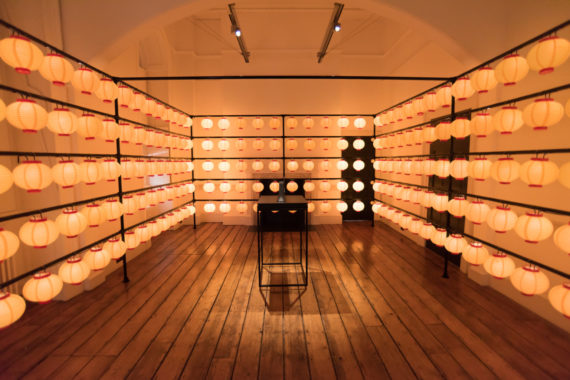 Swingphony is this year’s offering from Taiwan, in the third edition of the London Design Biennale, taking place in Somerset House in central London until June 27th. The three-week-long event is loosely based on the Venice Biennale, with a design twist to proceedings. The 2021 theme is ‘Resonance’.

Taiwan is one of 28 participating countries and regions (including Antarctica, oddly) which has its own ‘pavilion’ within the grand Georgian palace of Somerset House. Though in this case, the word ‘pavilion’ is rather a stretch: ‘room’ would be more accurate. But what a fabulous, calming, thought-provoking room it is.

I’ve had quite a stressful London-paced day, and have negotiated my way down the Strand to the ticket office of the LDB, where it’s taken me quite a while to wangle my pre-arranged press pass. Then, in the sylvan quad outside (they’ve planted a temporary forest) I’ve had to dodge a LDB guy with an iPad trying to get soundbites off me, before reaching the threshold of my destination: though the curtained doorway there’s an orange glow, the tinkle of piano music, and a calming rhythmic tick.

There’s a limit to the numbers inside, but after a couple of minutes, all masked-up, I’m in. Phew. It takes a few seconds to survey the territory. Three walls are lined with orange-coloured paper lanterns, five rows high, the source of that light. On the fourth wall there’s a screen showing swirling lines of colour, all yellow, orange, red and teal, as if Van Gogh had morphed into a digital moving-image abstractionist. Either side of the screen is a speaker, playing calming piano music. And on a square table in the middle of the room there are five interestingly shaped black metronomes, each clicking away to a different rhythm, like dancers at a silent disco with different music in their earphones.

The metronomes are formed of a moving part – a thin stick, with a light on the end – attached to a plinth-like base, wider at the bottom than the top, curving upwards.

But, hang on, are they clicking to a different rhythm, these elegant beat-keepers? As time goes on, they seem to synchronise, and soon – I’m sure of it – they are clicking and moving in unison. It’s a soothing experience.

The metronomes run out of power, and a black-clad girl winds them up. Again, they wave and click out of synch. “After a while they listen to each other and start moving at the same speed,” she tells me, in a whisper. “It’s like people when they worship together, they become like one person.”

The room is designed to look like a Taiwanese temple, she continues. The base of the metronome echoes the shape of praying hands. The little sticks with their lit-up ends represent the incense sticks which are ubiquitous in her homeland’s places of worship.

I’m starting to really like it in there. The colours swirl on the screen, the piano music tinkles on, the metronomes find their common beat. It’s all rather uplifting. 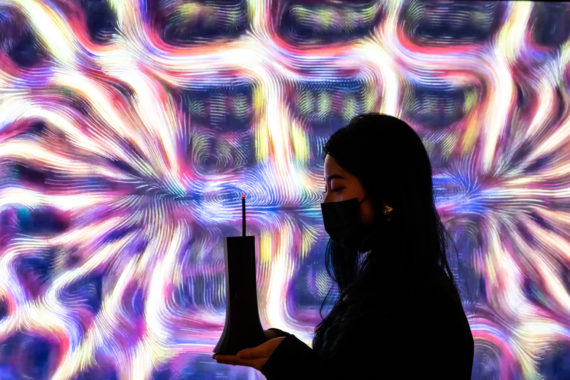 The next day, I attend a virtual press conference, where I learn more about the inspiration behind the piece, and the six-month process of getting it to work. The main speaker, a thirty-something chap called Keng-Ming Liu, is the creative director of Bito, the agency responsible for designing Swingphony, to a plan from the Taiwan Design Research Initiative.

I learn that the colours on the screen are gleaned from photographs taken in over 50 Taiwanese temples from all over the country, thrown into a digital melting pot. That the spontaneous synchronisation of the metronomes is representative of a phenomenon of physics known as the Schumann Resonance, Earth’s ‘natural heart-beat rhythm’. That Taiwan celebrates a good deal of religious diversity, and the piece represents the unifying nature of worship. It’s also about maintaining simultaneous respect for science and religion, in these pandemic-ridden times.

Time for the Q&A, and there’s a question I’ve been burning to ask: “What about atheists and agnostics? Does this installation have a message for the many non-believers in the UK?” “Yes,” Mr Liu responds, “the message is for everyone… To us [in Taiwan] the most important thing in religion is the ritual repetition of prayer, which brings harmony to our lives. The idea of Swingphony applies not just to religion, but also everything in our daily life, and the purpose is to achieve harmony via resonance.”

I’m going back to Somerset House before the end of the Biennale, to have a look at all the other pavilions, which I didn’t have time to check out first time round. Before I try anything new, though, I’ll definitely visit the Taiwanese Pavilion again, to help me get into the requisite contemplative mood. Stepping into Swingphony is a highly calming experience; perhaps this is what Mr Liu means by ‘harmony via resonance’. I might even pop in on the way out, too, before stepping back into the real world’s big-city bustle.

The Taiwan Pavilion is at London Design Bienale until 27th June 2021. www.londondesignbiennale.com