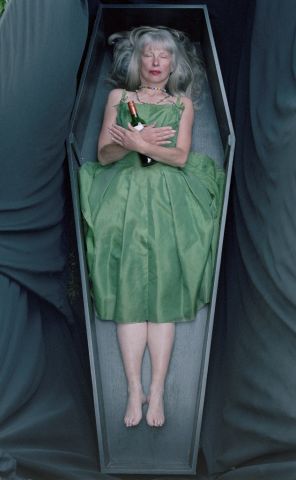 Sometimes the second visit to an exhibition is the best. Especially if the first encounter is at a private view among a crush of people where navigating the space involves squeezing oneself into the little pathways and viewing points that open up in the crowd from time to time.

My second viewing of Telling Stories, Hastings is a delightfully solitary affair early on a Thursday morning before most museum-goers have surfaced. I remember the layout of the show from my earlier visit, and some of the works have stuck in my mind – some marked by questions, others by beauty or intrigue. I am pleased to be able to give my full attention to the work, to go back to pieces which I know require an investment of my time. This time, there is no navigating to be done. I can allow myself to be drawn, to wander.

Pausing just inside the entrance to the gallery space I look around; get my bearings. The soundtrack from Lucinda Wells Extant video piece just inside the door sets the scene; a relentless sucking in-spitting out, shusshing of waves, it provides the soundtrack and rhythm for the whole exhibition.

Glancing around my gaze is drawn to a splash of colour in the furthest corner of the room – the rich yet understated hue of a jade green dress which clothes the subject of one of Grace Lau’s mesmerising Ad/dressing Death portraits, and which is mirrored perfectly in the aqua-green paint of Patricia Wilson Smith’s Fragments From A Vanishing World (Sandform). But then the rhythm of the Extant waves somehow pairs with the rhythm of a movement I see from the corner of my eye, to draw me through an archway to a room on my right.

The movement is that of a white clad figure, arms outstretched, cruciform, Christ-like; a turning man – turning on the spot, feet shuffling, toes upturned to balance, arms at times raised, lowered, raised again, each hand holding a white cylinder which is pouring out… or is it breathing in… a fine, pale stream of – mist? Dust? Salt? Or nothing so earthly? My mind is full of questions. Is that pale stream spun out by the figure’s movement – by a sort of centrifugal force, or is it the cause of his rotation, somehow propelling him with a power which I cannot know?

The figure is the centrepiece of Helder Clara’s digital video, Un Respiro. As I watch, a pattern has formed around the feet of the turning man; sillouhettes of flat, white human figures appearing, it seems, out of the white dust, forming a sort of wheel shape on the floor. Suddenly the pale line of connection streaming between hands and floor/floor and hands seems to be sucked abruptly up into the white cylinders in one final inhalation. The ritual stops, the figure stands, back to camera, arms lowered… and disappears.

Released from the spell cast by the turning man, I take the opportunity to look around the room. Here I begin to notice one of the themes that run through the exhibition. A coffin-like vitrine dominates the centre of the room, though like the figure in the video it is dressed in white, not black, and is immaculately lined with clean, new hessian. The contents too are crisp and pristine – bright, shiny, solid-looking, almost like a textured, glazed ceramic mat, or a sheet of chain mail. With its colour-shaded rows changing through pinks and greys, through beige, cream and white to aqua and teal, the long, narrow object is not immediately identifiable – a moment of uncertainty – what am I looking at? Then the clue – a pair of thick wooden knitting needles still carry the last row of shiny loops of Xaverine Bates’ Knitting the Shreds. The immaculately made mat knitted from shredded photographs works in my mind on two levels as I wonder about the now unreadable stories of the past which have been shredded along with the photographs, and speculate on the emerging narratives suggested by the reconfiguring of the glossy shreds into this new object, made, I’m guessing, with sore fingers as a celebration of renewal.

Allowing myself to be entangled in the thread of loss which runs throughout the show, I return now to Grace Lau’s work. The two Ad/dressing Death portraits occupy their corner of the gallery with a presence which is curiously reinforced by their not quite life-size scale, (reminding me of Ron Mueck’s Dead Dad in which the sculpture of the artist’s dead father is recreated hyperealistically in every way except for its scale, which is that of a child). There is a sort of magic to the carefully staged portraits of the two diminutive figures – twice boxed (once within their respective coffins and again within the frame), eyes closed (though actually – perhaps mischievously – not quite), side by side, their facial similarities an unsettling feature, carefully dressed, hair arranged, props in hand, feet bare. Like the ancient Egyptians, they carry with them talismans and “treasures” for the afterlife. They remind me also of Margareta Kern’s Clothes For Dying in which the artist creates portraits of women in Croatia and Bosnia & Herzegovina with the clothes they have made ready, in which they will be dressed for their burial.

Themes of death and loss and narratives rooted in history or drawn from memory permeate this exhibition, which is perhaps not surprising since our tradition of storytelling is inevitably based on the telling and re-telling of tales based on human experience and which help us make sense of our short lives. There is perhaps an unavoidable darkness to some of the work such as Cathryn Kemp’s Sleeping Beauty, an exhumed Victorian nightgown laid out in a glass and oak cabinet, which holds the same sort of grim fascination as the preserved remains of a peat bog man or a mummified corpse. The accompanying series of 21 iphone photos offers curiously anatomical documentation of the partially uncovered fabric with close-ups of its rib-like pleats and seams and its lace trim mimicking bony cavities and open orifices. Like all of the works within this exhibition, the images trigger many questions and offer few answers, leaving the viewer to fill in the gaps and expand the narrative from those touch-points which are activated in their minds.

Escaping from the darkness, Martin Everett’s Lypophrenia (Domestic Landscapes part two) seems, despite its title, vaguely comforting in its familiarity. And yet his images of domestic interiors and projected family snaps suggesting tales of childhood adventures, family outings and get-togethers, undoubtedly carry with them that undefined melancholy suggested by the title – “a vague feeling of sadness seemingly without cause”*. Meanwhile, Franny Swann’s assemblage, Requiem for a Lost Language, offers a nod to the past and an optimistic pointer to the future with her dress pattern tissue seedlings sprouting from the redundant compartments of old wooden print trays.

It is tempting to mention something about every work in this exhibition, each piece having its own quality and integrity, but far better to explore them in person, giving each and every work the time and thought which it invites as a response to that which has been invested in it by its maker. The exhibition may not offer the instant gratification of much of contemporary culture but instead extends an invitation to take time to wander, away from the rush of modern life, picking up the seeds of narratives as we go and letting them grow in our minds.