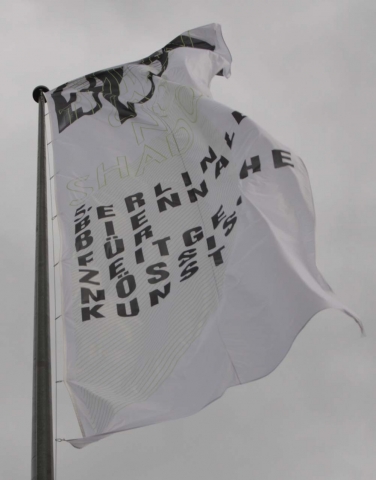 Off I trotted to the 5th Berlin Biennial, to find out what it was all about. It is spread over four sites, the Mies Van Der Rohr designed Neue National Gallery, KW Institute for Contemporary Art, the Schinkel Pavilion, and the Skulpturenpark Berlin_Zentrum (an urban waste land).

I had high expectations of the Berlin Biennial, Pushwagner, Ahmet Ã–güt and Haris Epaminonda’s being highlights certainly made the experience worthwhile. But I was expecting something overall much more intimate, performative and confrontational.

The Biennial programme was divided into ‘day and ‘night’. ‘Day’, being for the exhibitions, and ‘night’ a series of evening events. Because there was so much to see I am going to focus on particular pieces at each venue, and the night lectures.

Ahmet Ã–güt had tarmacked the entire ground floor of the back of the KW Institute. You could wander around Ground Control feeling its bounciness underfoot. The work showed us something that we tend to take for granted ‘urban carpet’. Tarmac that transforms our perception of the ground beneath our feet, in a way ‘branding’ it into a homogenising surface where there certain expectations of conduct and a process of development or progress.

Manon de Boer sensitive filmic recreation of John Cage’s Two Times 4’33’’, allowed, through its silent second half, us to attempt to visualise the sound of things such as wind blowing through trees. It gave these filmic moments stillness brought only through the absence of noise.

Pushwagner is the best thing since sliced bread. His pictorial story Soft City completely blew me away. Pushwagner's outsider art like cartoon drawings were amazing. In addition to the visual story, the Norwegian, Pushwagner had large-scale pictures at the Schinkel Pavilion. There is something intensely raw and uninhibited about his work but with a pointed critique of the dystopian future we appear to be hurtling towards. Soft City, depicts the daily life of a couple who move through life without any freedom of individual expression. Their life is identical to everybody else who lives in this uniform and giant city. Looking at some of his drawings is like looking at an Andreas Gursky, its expansiveness is awesome.

While I was in Berlin the Chinese inhabitants protested at the Western Media’s coverage of their country. Zhao Liang, an inhabitant of Beijing, videos of everyday life in the Olympic City gave us an insider’s view of this rapidly changing country. Some of the snippets were amusing, some violent and horrific.

Kohei Yoshiyuki black and white photographs of people involved in sexual acts in parks were fascinating and uncomfortable. Partly because the participants and viewers were in complete darkness, but we, the viewer, could see what they could not, including others: bystanders’ voyeurism and by extension, our own.

In the quite densely arranged works in the Neue National Gallery Thea Djordjadze had created a loosely interior referencing sculptural arrangement, which had on it clay like objects. Her work had subtle pallet and I especially liked what she had done to one of the windows. She had covered in a light dirty white wash, which carefully linked her floor based 3D constructions to the Van Der Rohr architecture.

The highlights were Paul Sietsema black and white silent film of objects and Haris Epaminonda’s miniature display area with 70s books that had been subtly intervened in by adding geometric shapes, cutting, duplicating or reordering. These subtle works slowed you down and caused you to reinvestigate these texts for other meanings or readings. Beautiful works carefully contextualised.

Paul Sietsema silent film Figure 3 was 16 mm film of objects and artefacts placed simply in front of the camera. The subject matter of the film were images from the 1969 exhibition Anti-Illusion: Procedures/Materials and fake artefacts that the artist had made. I loved its simplicity and the visual enjoyment of the objects materials and textures.

Unfortunately the noisy Susan Hiller sound piece had been mysteriously removed. Perhaps by local residents who found it too loud. All that was left was our own imagination of what it could have been. I am still completed undecided about Aleana Egan’s very slight metal construction Grey Luminous Light From The Sea (A Structure for Readings) that I completely missed to start with. It could be something that was already on the site, but had an aesthetic appeal with is soft sinuous minimal lines.

For my first event I went back to Primary School and attended a lecture on music by Goodiepal. At which, in exchange for a drawing /score, I got a North American shaped and a cheese shaped record. The second night event was a lecture on dust, Dustination by Bettina Vismann. Unfortunately, this lecture was almost completely in German and my German is embarrassing minimal to say the least. The slides were nice: they had good diagrams. The third lecture, and my favourite, took place in a mechanics workshop. Erik Thys and Harald Thys shared with us their amusing aesthetic appreciation of cars.

The role of the geek: a person who has a peculiar large amount of knowledge not considered to be normal or socially acceptable, appears to be the social norm at art events. Perhaps it is something to do with how artists often situate themselves outside the mainstream, allowing them a more privileged outsiders view. These lectures on obscure things seem to me, to hark back to Dadaism and an absurdist rebellion against hierarchies of knowledge that have caused many unsavoury things in contemporary society.

I enjoyed going to the Berlin Biennale partly due to the art scene there being quite friendly and open. There was great art on display, but I was left wanting a bit more.