The Art of Clutter - a-n The Artists Information Company 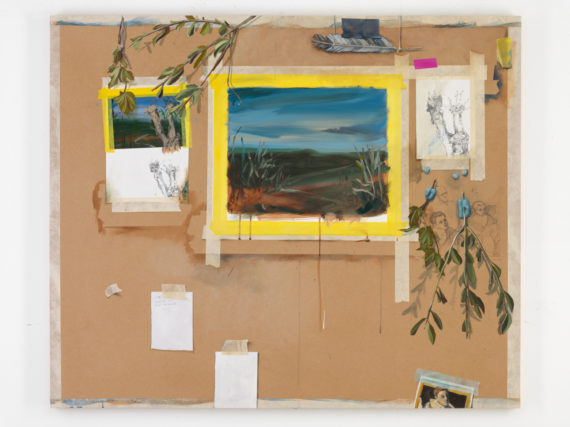 My sense of direction is notorious, but even I can’t get lost looking for the Aleph Gallery’s pop-up exhibition in Piccadilly Arcade. “It’s pretty much bang in front of the Royal Academy”, I’ve been told, and by God, it is, just on the right down one of those posh little sheltered shopping galleries.

I knock at the door, equipped with the fruit of some research I’ve been doing. The stylish, smiling woman I can see through the convex bow-windows must be Vivienne Roberts. She is the founder and director of Aleph Contemporary, which seeks out and promotes artists whose work should have been picked up by the Mayfair outfits but have somehow been missed. The current exhibition – on till the 29th of September – is a two-man show, featuring Laurence Noga (60) and Alastair Gordon (41), both of whom are university art lecturers as well as practising artists, and both of whom deal, in very different ways, with incorporating everyday clutter into their work. 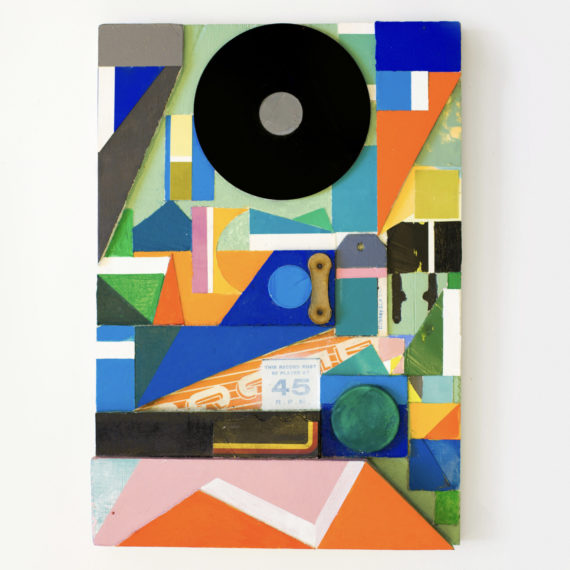 Vivienne shows me downstairs, where a dozen or so of Noga’s colourful works jump out of the walls. Laurence Noga’s story is a poignant one: his late father, a Polish refugee, was the maitre d’ at the swanky West End restaurant Le Caprice, and his mother was a jazz singer. The father was a hoarder, and never threw away any of the memorabilia or detritus of the couple’s life, cramming his garage full of old tickets, records, defunct machinery, tools. Several decades-worth of what Philip K Dick called ‘kipple’: the sort of stuff most people would hire a clearance company to dump.

Not Noga. He decided, instead, to sift through it, and incorporate as much as he could into his art practice. At first sight his work seems to be clever post-Cubist geometric abstraction, as if Jean Gris and Fernand Léger had joined forces with MC Escher. But take a closer look, and there is a strong element of collage and assemblage to it, with spaces artfully filled with faded beer mats, old-fashioned price-tags, random offcuts of woodwork. You find yourself minutely examining the make-up of its texture: ‘is that a bobbin?’; ‘Play this record at 45 rpm’; ‘look, that’s the base for different widths of drill-heads!’ It’s abstract art-cum-family memoir, then, strangely moving and enormously aesthetically pleasing; there is a fine balance and a lightness of touch to the geometry, and his palette is gorgeous. Plus it’s hours of fun. 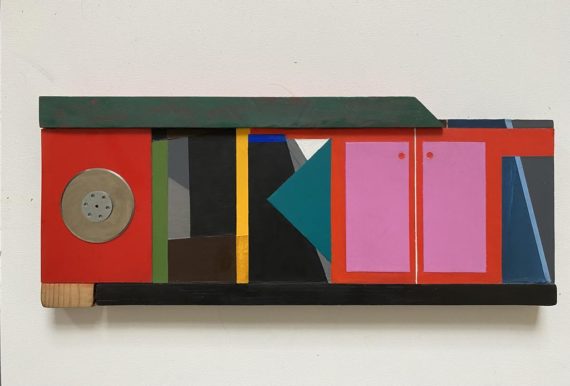 We move upstairs, and Vivienne, who is a passionate and knowledgeable guide-stroke-raconteur, tells me about how a visit to Alastair Gordon’s studio in South London helped shape the themes of this current series. Alastair is a hyper-realist, who has made his name, I’m told, reviving the eighteenth-century genre of trompe l’oeil/still-life painting known as ‘quodlibet’, which has given its name to this show.  This was a Northern European practice in which artists would depict intimate items from their studio – including letters and prints – taped up to a wooden panel, painted so realistically the viewer feels a thrill of accidental voyeurism, as if they’ve stumbled into the artist’s secret chamber.

Gordon has brought this artform into the modern age: the items he depicts – postcards, notes scrawled in biro, paper aeroplanes – are attached to woodchip boards with masking tape and Blu-tac. He’s a master, in particular, of bringing the tape to life: you are tempted to take a thumbnail to it, and peel it off. 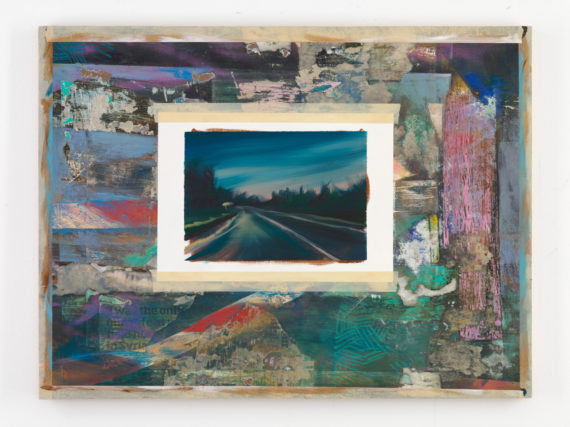 What Vivienne noticed in his studio was that much of the work on his walls, and in his sketchbooks, was very different: Gordon also had a flair for gestural art: landscapes depicted in broad brushstrokes, with Nash-like trees, and moody skies. She encouraged him to explore this side of his work, too, for the exhibition, and the result is a remarkable hybrid, most apparent in the piece ‘Improvisation’.

In this painting, a blurry landscape, which brings to mind a winding path in the Cheviots, perhaps, or the Eildon Hills, is ‘taped up’ as the centrepiece on one of his trademark boards, surrounded by representations of the paraphernalia that has – one surmises – been used to influence its making: sketches, small, leafy branches, postcards, a feather. And so we find ourselves looking at a painting within a painting, a striking piece of hyper-realistic meta-art, which transports the viewer right into Gordon’s studio, simultaneously making us aware of the fakery of the artist’s practice, and taken in by its verisimilitude.

Brilliant stuff, then; I take my leave into the bustle of Piccadilly with a headful of images and questions, and – most importantly – the urge to tell people about what I’ve just seen.

Aleph Contemporary’s next pop-up exhibition, Lost in Abstraction 1,2,3 curated by Alistair Hicks, will be held at The In & Out Club, St James’s featuring the work of Henry Ward and Mark Wright, takes place from 19th October 19th – 30th November 2021.

Aleph Contemporary is at www.alephcontemporary.com