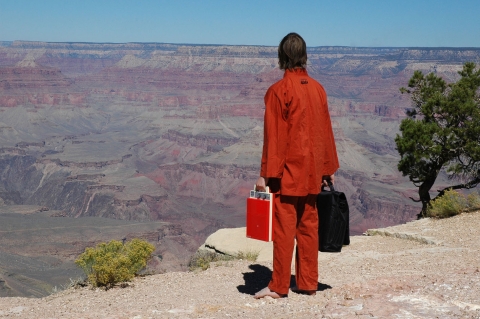 The idea of self-discovery, of an internal search for yourself is age old. The path of the artist seeking truth or solidarity within themselves and within a culture is age old, a well trodden route. The path to abstraction paved by Mondrian, Kandinsky, Rothko and Malevich could be seen as to follow these paths, a deconstruction of the landscape around them, a reconsideration of forms re-emblazoned upon canvas in order to seek true form, to discover the deeper secrets of composition and our responses to them. A continual investigation of truth, a searching for a spiritual side to humanity.

Taking on a persona with which to embark on this search, whether through creating a narrative for a character acted out in text or by someone else, or as an alter ego enabling the artist to experience the journey themselves is also a road well travelled. ‘The Barefoot Lone Pilgrim’ is David Blandys alter ego, a persona he takes on in order to carry out his own personal journey. He is a mythical entity on a mythical search; the solidarity of what is real within the work is shifted through his presence, a step into the liminal space, through disorientation into an experience that will indelibly mark the formation of character.

Born out of multi layered cultural references, the pilgrim has embarked on a search for ‘soul’. He is part Shaolin monk, part soul singer, part explorer. It is a quest on two levels, a consideration of personal spirituality and a questioning of the origins and influence of Soul music. The pilgrim is, by definition, someone who travels in a foreign land searching for a sacred place to pay his devotions. ‘The Search for Mingering Mike’ is a search for a character to which the pilgrim will pay homage, with which he seeks to gain a connection.

There is a lot of cultural homage in Blandys work. The pilgrim himself has origins in Japanese folklore, through Lone Wolf and David Carradines on-screen characters, particularly in ‘Kung-Fu’. Blandy himself is learning Kung-Fu, although he could never achieve those levels of skill. He will never be a rapper or a soul singer. Instead, he begins to emulate their skills and achievements, letting Bruce Lee train him as an artist in ‘Emotional Content’ (2003), or lip syncing to the Wu-Tan Clan in ‘From the Underground’ (2001). This act of stepping into the place of another is reminiscent of Lacan’s mirror theory (1936); Blandy can look at himself taking on the role of another. Knowing he could never be that, yet yearning to, as the skills required are not honed to a sufficient skill; that objectification of his image as insufficient begins to build into his ego and identification is formed.

His quest for soul had begun previously with ‘The Five Boroughs of the Soul’ (2004) where he visited the five boroughs of New York to pay homage at a place of musical significance in each; ‘The Soul of the Lakes’ (2005) where he traverses the wilds of Cumbria from one record shop to another, searching for evidence of the characteristically black, urban music; and ‘The Soul of London’ (2006) where he investigates the Pilgrims origins. In many ways ‘The Search for Mingering Mike’ is part four of the story. Each previous work has affected the next as Marco Polo tells Kublai Kahn, ‘Arriving in each city, the traveller finds again a past he did not know he had’ (Calvino, 1974 pg 24), or as Alfred North Whitehead (1929) proposes that each Occasion of Experience is influenced by previous ones, and will affect future ones, the experiences building the character.

This time the Pilgrim is searching for a man who created his own myth. Mingering Mike released over fifty albums, nine motion pictures and managing thirty-five record labels between 1968 and 1967, yet remains an obscure figure known to few for the simple reason that none of his work was real. He designed record sleeves, made cardboard vinyl and invented other artists who he managed via his own labels. This is a man who dreamt of being a Soul singer, and achieved it within his own fantasy world, later to be discovered and celebrated by others, becoming a cult star in his own right. Like the Pilgrim, Mingering Mike is mythical. He is invented, a tool for the projection of dreams.

The Pilgrim finds himself within the 1972 film ‘Space is the Place’, in Sun-Ra’s ‘Outer-Space Employment Agency’ from where he is taken far away to a colony of Black people. Their insistence that this colony is the key to existence, that the vibrations are different and more suited to their race leads the Pilgim back to Earth to save humanity from itself, to find Mingering Mike ‘The only man who can save this planet from itself’. He visits a black youth club and whilst lip-syncing to the film, explains how he is not real as, like them, he has no status. We see a white man dressed as a Shaolin monk standing up for Black rights. Sun-Ra was a musician and the film is his portrait, a man who believed he was descended from angels rather than from humanity.

This then is a piece with many references to projected personas, filled with characters played by people trying to live their dreams. The journey is a look within the Pilgrim, which in turn is a look inside Blandy, perhaps an attempt to discover something within himself which might explain his longings, or an attempt to find his true identity. The references are so layered, obscure cultural figures and a look back to Blandy’s previous work, that it becomes almost inaccessible without a knowledge of Soul, Sun-Ra, Mingering Mike or the Pilgrims journeys, each character seemingly invented by Blandy himself to portray a narrative. Each character is fantastical in being unachievable by the person playing them, yet each person believes they are that persona. The work is a fantasy which touches on Blandys dreams.

Blandy has made contact with Mike although there has been physical meeting as yet. I wonder if it was David Blandy or The Barefoot Lone Pilgrim who took part in the exchange.