The black subject: ancient to modern

This symposium, which in only one day tried to cover the appearance of the black subject in art from ancient times up to modernism, was a gathering together of interesting recent research, given by compelling speakers. It is unusual for me to attend a symposium or conference and not feel bored at least part of the time. I am happy to report that at no point did I find myself thinking “why on earth did they put that on for/” or “who is this person and how can they have the nerve to stand there talking like this?” No, this was a timely, well-organized and utterly fascinating day.

Part of the appeal was just the absolute necessity of this discourse. I have written on a number of occasions about the invisibility of the non-white artist, and the working-class artist, but I haven’t really talked much about the invisibility of the nonwhite subject. Actually, it was exactly this issue that brought the whole problem to my attention: the invisibility of nonwhite subjects in paintings. I wondered why, despite the plethora of images of black subject in advertising, when it comes to fine art, contemporary artists don’t go there. Then I realized that that’s not it: the problem rather is that the contemporary artists who do make those pictures are much less visible than white artists.

A large part of the symposium was dedicated to “finding the black face” in art history. Although this might sound a bit odd, I believe that it’s a necessary act, and one that really needs to be done more. And when I say done more, I mean addressed within the education / Museum situation. This point was made by the curator Jan Marsh, who helpfully provided a useful list of images of paintings of Black subjects in British art institutions.

So, having spotted the black faces in the history of European art, what next? Actually, the answer was provided right at the very beginning of the symposium. The artist Kimathi Donkor discussed his own work as a painter, which interrogates mis/representations of black subjects in Western art history. What’s really important about his work is that he’s one of the few recognized figurative painters active in Britain today who portrays black subjects. Yes, that’s exactly what I said: one of the few. I became familiar with his painting Toussaint L’Ouverture at Bedourete, a powerful and strongly cinematic depiction of the Haitian revolutionary hero. I was really impressed with this painting, a remarkable piece in the grand tradition of history painting and, I think, a very important work.

One of the problems with art history, of course, is that with very few exceptions such as H.O. Tanner, the one doing the representing is white. It’s only in the 20th century that we start to see a trickle of representing being done by black artists. But even those are largely invisible in terms of European modernism. One of the most stimulating presentations, which is saying something in a day full of stimulating presentations, was by Prof. Partha Mitter. Discussing the work of Jamani Roy. I didn’t know anything about Roy before but what Mitter talked about was the idea of alternative modernisms. I’ve always been interested in this, the idea that modernism has been interpreted purely from Eurocentric perspective, which if you think about it is absolutely ridiculous. Especially when you think about how the architects of modernism were themselves completely influenced by Eastern philosophies The art market may reward the Eurocentric interpretation of modernism, but why should we?

The symposium didn’t really address the subject which I left wondering about, which is how to get all of this fantastic research into the broader public discourse. Where are the art history television programs that present this art history? Where are the non-white artists in the major prizes, and television portraits such as “what artists do all day”? 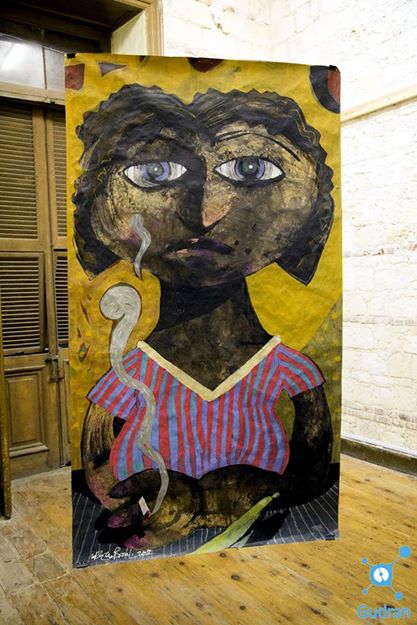 It is necessary, but not enough simply to spot the presence of black people in art history. We need to see them in contemporary art as well. We need to encourage and support artists who want to depict their reality, black subjects. Because these black subjects are part of our reality. The faces of our history, our neighbors, our friends, our families. Kimathi Donkor’s work is significant and necessary, as is the work of artists such as Lynette Yiadom-Boakye, and my colleague the London based Egyptian artist Nazir Tanbouli.

The commercial demands of the art market does not seem to be interested, which is their prerogative. After all, they’re mainly interested in buying and selling, whether it’s arms or paintings. But once again, I have to say that we need to examine how and why the criteria of the art market is so accepted completely uncritically, not only by our media but sadly, also by the curators and critics, and those who are supposed to be nurturing our art tradition and building our artistic legacy.

– a significantly longer version of this review is on my blog http://blog.gillianmciver.org/2015/02/22/the-black-subject-ancient-to-modern/