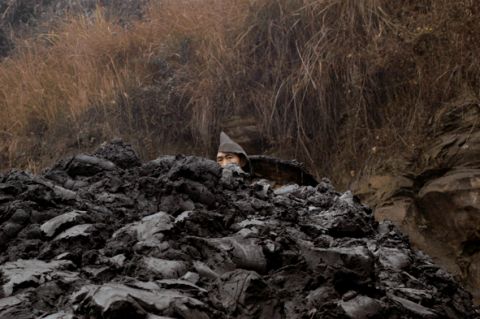 China is recorded as being the world's biggest coal producer with an average of 800 million tonnes of coal in a year, yet it has also one of the world's worst mining conditions claiming thousands of lifes every year.

The photo reportage “The Dark Truth: Coal Miners of China” exposes some of the working conditions in the world largest coal industry, an industry that is fuelling the Economic “Miracle” of China (Orville Shell, published in China Stands Up).
It has been estimated that at least 12.3 million people in the world are trapped into forced labour creating the basis of modern slavery (International Labour Organisation, 2005). Citing some of the forms, those vulnerable are forced into prostitution, bonded labour, trafficking and child labour. With my photo reportage “The Dark Truth: Coal Miners of China” I hope to contribute in finding ways to challenge and inform on this issue alongside the millennium goal which seeks to make the global economy work for the many and not the few. The economic globalization in China has seen a huge migration for work in recent years particularly from rural areas because of the enormous decline in farming. Many desperate people leave their homes searching for work and accepting any terms of employment. Their vulnerability makes them an easy prey for exploitation particularly from mid career business men eager to make money quickly at hardly any costs creating shaky and often short term operations like small illegal coal mines. Operating under the corrupt eyes of town sheriffs, in remote mountainous areas of China, when accidents occur the small mines are just shut down as if they never existed neither the families are notified of deaths or injuries to avoid paying any claims. The workers safety and human rights are not taken into account; many mines have only one exit leaving the workers with just one way out in case of underground explosions, cave-ins or flooding. Unprotected clothing, safety equipments, poor housing have also damaged the health of many. According to CLB (China Labour Bulletin), the official number of deaths from coal mining is of 7.000 workers a year, deaths, which can be prevented, if measures are taken to protect the workers rights and safety. Moreover, the vulnerability of the same due to poverty and lack of education are also a contributing factor of this devastating problem.
Collaborating with the Justice and Peace Commission of the Hong Kong Catholic Diocese a video and informative material was produced from my reportage, including seminars with the aim to educate and prevent more unnecessary deaths. This material was circulated in schools and various work places in mainland China. I see this exhibition as a further step towards reaching fairness at work and for highlighting the plight of many workers worldwide.