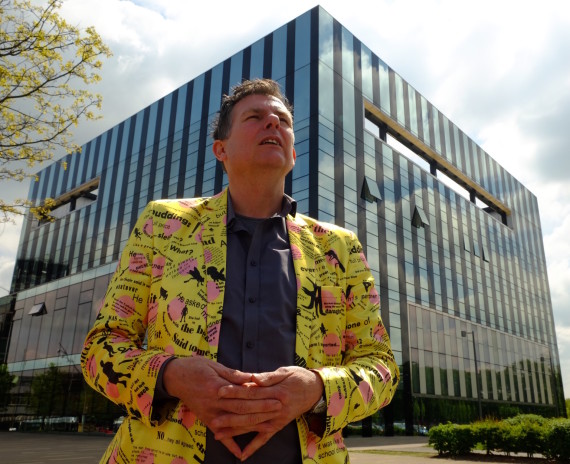 The Day the Man in the Gold Suit came to Town:

Intrigued about his current project I met Tom Hackett for a cup of tea at the Boating Lakeside Café, Corby, on one of several day visits by the artist to the Midlands town. His golden Conversation Suit glistened in the bright mid day sunshine. Fragments of past conversations spoke back across the bench at me: “He kept having panic attacks” “Puddings!” “a bit short on What!” Black text printed in a variety of fonts and point sizes scroll up, across and down his suit, punctuated by silhouetted black rabbits & flies and overlaid with pink golf ball sized Polka dots set in grid upon a silky yellow golden fabric.

Earlier this year Hackett designed the digitally printed fabric and the suit, which was then professionally tailored over the course of 8 weeks to fit his 6ft plus frame to the inch.

He was in Corby collecting conversations from whoever wanted to engage and talk with him; and his suit was the instigator. He scribbled down the recollected tête-à-têtes in his notebook. The memories of his many chats with folk from the town were to be edited and to form more fragments for two more tailored Conversation Suits.

Discussing Hackett’s earlier works, we strolled along the path through the ancient woodland park that connects the boating lake with the town’s precinct shopping centre. We meandered past several locals coming the other way. Those who had their heads out of their phones not only noticed the suit but took a second, and a third look.

In the precinct amongst a crowd of shoppers, the majority smiled at Hackett’s suit; some, perplexed, stopped still and stared; a few strolled right by without batting an eyelid. Within a minute or so, a shopper walked right up to Hackett: “I love your suit”. I moved aside, but within earshot I heard the conversation move quickly on: from Two-Toned suits; to Madness; other music genre and specific gigs from ‘back in the day’ (at venues which have subsequently closed. The gentleman noticed me and my camera …“Are you with Tom, can I have a photo of us both?” the pair already on first name terms. I obliged. The negotiation of subject matter between them flitted quickly from music to art … “I like art too … I paint owls” and “Yea, I work in that Park” More connections were made; I stepped further away and allowed the barter of language to play-out to an end game.

I began to smile myself: how quickly and actually how lovely was the interaction between two complete strangers, who started talking over a bright, text-emblazoned suit, but then quickly moved on in conversation until they found common ground and finally both left the other satisfied with the exchange … It’s Good to Talk I felt.

Hackett started collecting things 30 years ago. I first encountered Tom Hackett’s work Burst in 1991 at the Bonington Gallery in my hometown of Nottingham. Hackett, a Sheffield artist back then, had challenged me for the first, of many, times. In the cavernous 12 metre white cube space of the Bonington, Hackett had collected and precariously stacked up, high, into one far corner, in excess of 50 industrial, heavy, wooden cable drums. Once laden with steel cables, now soft fabric flowed through, entwining the weighty solid drums. The cloth tumbled down and cascaded finally around a single upright drum on to gallery floor. The rest of the gallery lay bare. As a young painter, with particular view of what gallery walls are for, this irked me. Hackett had densely crammed just a quarter of that huge space with the drums. But after engaging with the work for a while, my eyes flowed up beyond the pyre of drums, over its peak, way up into the ceiling and I realised he had made me re-engage with the space afresh.

A couple years later, I travelled to see The Sky Fell Down at the Battersea Arts Centre to see another Hackett installation. Before I even entered, he had me questioning. The façade was adorned with masses of galvanised buckets, suspended in vertical lines on steel cables that seemed poised to capture any falling rain, but I noticed that all the buckets were useless as vessels as they had holes in where the suspension cables passed through! He already had me.

Inside, football-scaled, glass (Monopoly shaped) houses were bound with rubber inner tubes and again suspended, but with oversized hooks and ropes, trailing like a chandelier in the stairwell. Their fragility and Heath Robinson, wonky strapping created a deeper sense of unease when stood directly beneath them. Upon entering the two gallery spaces, a giant, four-pronged, wooden sleeper grapple hook was balanced on two of its spikes in the gallery floor. A taught, hefty rope, tied on the end of its shank went through an adjoining door into a second gallery where dynamic, crisscross wads of vivid blue fabric strands were hooked into the floor and stretched tight to the ceiling, punctuating all available space … Wow! Hackett curiously manipulates the spaces he installs his work in. He tends to create a sense of unease or the unexpected, with weight, balance and tension between the fabrication of the manifested artwork, and the physicality or proportions of the building in inhabits.

Last year I visited Rufford Park. In the outdoor Orangery Hackett had installed thirteen black wheelbarrows with bright yellow wheels, each housing, incongruously, life-sized, vivid yellow, silicon dogs. A static circle of cast canines, sitting proudly to attention and looking out for their owners, the dogs were accompanied by a pile of free tabloid newspapers stacked high to one side, titled Shaggy Dog Stories. These had been produced following several of Hackett’s walks through public places. These walks also initiated Hackett’s first Art conversations with strangers as he collected ‘Dog’ anecdotes from actual dog owners whilst Hackett ‘walked’ one of his yellow silicon dogs in its wheelbarrow. Hackett is a non-dog owner (he owns a cat). In the Apsidal Gallery, Specimen consisted of a mini retrospective from the past 30 years: an archive of fragments from previous projects. The elements were in vitrines and glazed alcoves, several set in grids. Stainless steel bowls carried the whiff of medical odor, like autopsy jars in curiosity cabinets; they contained dismembered remnants of artwork dislocated from their original, site-specific installations. The signage was matter of fact – a beautifully-bound catalogue raissoné tomb the only visual guide to envision and reconfigure the particles back from their original installations from across the country.

He is putting our words on his back, arms and legs. Vulnerable, he puts himself into every-day situations of what Hackett calls ‘complimentary street harassment’: he must equip himself with verbal dexterity from occasional heckling, and negotiate his way out with a smile and of course, words, which invariably turn into conversations.

Two more, vivid-colour, bespoke Conversation Suits will be tailored over the coming months from Hackett’s verbal interactions with the public in Corby and Nottingham to be worn and walked in,

around Lincoln later in the year. All three suits will be installed in an exhibition in 2017, aptly at The Collection, Lincoln, with a complimentary Conversation Piece tabloid newspaper and commissioned soundscape formed from the fragmented dialogue of the three cities, in collaboration with artist Julian Woodcock.

Tom Hackett was collecting conversations in Corby over several days in May. You may come across him in one of his suits conversing in Nottingham over June-July and around Lincoln in the autumn.

Marek Tobolewski is an artist based in Nottingham