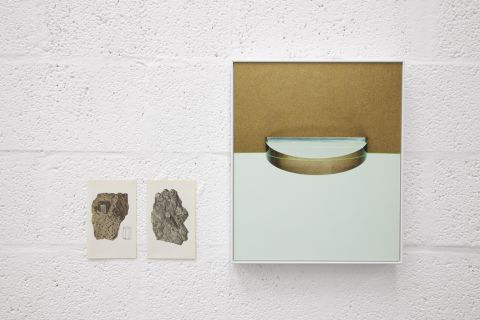 Tucked away, almost hidden inside Haroon Mirza’s /|/|/|/|/|/|/|/|/|/|/|/|/|/|/|/| at Spike Island you find the exhibition The Edge of Collapse by Suzanne Mooney. Consisting of medium and small sized giclée prints, newsprints and found illustrations, the space is too bright, clinical, dazzling and unreal. I’m unsure whether the light levels were intended or a happy accident but they give the work an apocalyptic feel. The moment of pure glaring brilliance before everything falls apart. It works. The electrical fuzz soundtrack bleed from Mirza’s monitors around the corner provide the soundtrack to Mooney’s collapse.

Ostensibly this exhibition is about composition, formations, and materials in relation to other materials, the pressure and influence they exert on one another. In a more underlying way it is also, overwhelmingly, about colour. The prints are photographic still life studies, a fact I totally missed until I read the exhibition guide text. I had assumed a type of collage process. The components within them are arranged display systems, Perspex props and wooden platforms that are used to display luxury items. The items themselves, crucially, have been removed but the prints still retain a feel of luxury. There is a seduction in the saturation of colour that makes the paper seem heavy and sticky. Possibly, in the gallery, the only thing that gets the opportunity to stick to them is dust.

Two newsprints of gem formations in rock, Proposition Ι (2011) and Proposition ΙΙ (2012) are juxtaposed on different walls with colour prints of abstract forms in orange, blue and brown, The Edge of Collapse series. Nostalgic colours, washed out seventies sunset t-shirts from vintage shops, the burnt umbers remembered from carpets in the eighties. It is the oranges that I find most fascinating; there are so many different shades and evocations-Fanta Orange, the sugary mess of a Soda-Stream, translucent Jelly orange, plastic Wimpy Orange.

On the far wall are the two largest giclée prints, Equilateral Coercion ΙV and ΙΙΙ (both 2012), side by side. In both, the surface is split top and bottom with a thin and almost imperceptible neon green thread of a line running across them. In Equilateral Coercion ΙΙΙ a grey-green-brown surface with a scratchy material like texture, almost photographic, hangs atop a white cream layer. A curved orange shaft emits from a pinkish cone. At its molluscan apex a tiny cream dot makes the cone seem cheeky, a dismembered Pinocchio nose. Equilateral Coercion ΙV switches the cream and brown surface around, getting rid of the orange. The cone is now a light sludgy bathroom green and below the green neon line as if magnetically stuck. It is, perhaps, the moment before falling. Here the cone tip points toward a lunar-like landscape.

Semi-circles feature in several of the prints. They are shapes to be dealt with as abstractions but also represent the forms of curved pressure in diagrams of processes such as Metamorphism. Deep geological pressures that heat, melt and explode to force new materials into being. In the blue solar landscape on the right wall, The Edge of Collapse No.930 (2012), the semi-circle is the sun. At first glance it is a simple graphic rendering of a cold sunset. Ground with semi circle emerging. The texture of this ground, however, is both real and un-real, a smudged mat texture or end-of the world wheat-field. The whole print is devoid of warmth. The viewer could almost conjure the un-natural grey snow as the father and son walk towards the coast in McCarthy’s The Road.

Further along this wall the semi circle becomes a shelf in The Edge of Collapse No.930 (2012) with an art-deco line sweep, found in banks with a biro on a chain or the Seaside 2p coin pushers. The brown of the prints top segment turns to MDF wood texture. Next to this are two small rock drawings, Figure 1 and 2. These are illustrations taken from the book The Colour Guide to Familiar Minerals and Rocks. Sometimes, in this exhibition, the prints work alone and sometimes they rely on the partnered drawings for stabilization and understanding.

There is a small booklet published in conjunction with this exhibition and available within the space. Artist and writer Mick Wilson has written a text, poetic and descriptive Splayed: Six Verses Dreaming Gaps in Great Shining Things which is accompanied by rizographed images of Mooney’s work. This, along with the introductory text for both Mooney’s and Mirza’s shows are useful at filling in practical details and creative interpretative overlay but they should be seen as extra to the experience of looking rather than integral to that process. The great opportunity in this work is the subjective narratives and associations the viewer brings and assigns to the work. Playing at being a curator for a moment, Mooney’s work in The Edge of Collapse put me in mind of the metal cube prints by Becky Beasley, seen here at Spike as part of the Structure and Material show in late 2011. Beasley’s work is similarly obtuse and enjoyable. The pairing of the two in exhibition would extrapolate the connection between the unceasing progression of geological industry, man-made industrialization, abstraction, colour and formalism. There are further potentialities in Mooney’s work, I think, that have yet to be uncovered.