The Elephant in the Room: Contemporary Painting from London - a-n The Artists Information Company 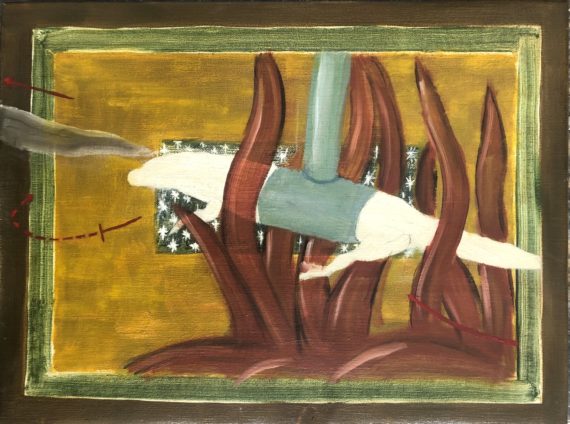 Never has there been a more prescient time for a painting show that simultaneously explores and condemns the futility of ‘making sense’ of the world. This show was due to take place at Durden and Ray, Downtown LA. It features a line-up of seven London based painters. It was cancelled due to Covid 19. In various ways the exhibiting artists trigger aspects of reflection on the ever contingent problems of ‘project sense’ as a governing societal paradigm.

One of John Wyatt-Clarkes’ works ‘The How and Why Wonder Painting of Love’ borrows its title from the marvellous series of illustrated children’s science books published in the 1960s and 1970s. Outdone only in the scope of ambition by ‘Enquire within upon everything’. In this painting an unlaboured image of a white dinosaur shape appears suspended by some grey utilitarian device as if undertaking guided travel through a sub aquatic plant-scape. In the background a mustard yellow plane is broken by a sketchy ‘starry night’ window view. The tail of the creature breaks out of the first inner scraped frame, but is neatly cropped off by an outer burgundy frame. The style is depictive, loose and playful and is assured in its unadulterated immediacy of placed paint. This work is delightful and decidedly free from bubbling under angst. Viewed collectively the composite parts of this painting manage to catalyse something curiously impactful for me, including bemused references to Darwin, pre-history, love, the Universe, the indexical mark and the limitations of visual pedagogy. Not bad at all for a 30x40cm painting.

There is a pervading element of gallows humour in the paintings of T.D MacGregor. Where frequently camouflaged military references sit amongst cheerful exuberant blobs of colour. He makes many nods to art history and the process of paint itself. He is also an artist who puts himself frequently in the picture, (not so much as an act of self-love, more so as a confused participant in the whole painting game). ‘Many levels ‘ is a great example of this. The artist depicts himself in the mirror of a brushed steel lift, sporting a lanyard and a dislocated expression. Dominating the foreground is a trolley sporting a blue plastic flexi tub,  surrounded by various labelled pot plants and seed trays. This seemingly ‘everyday’ and well executed dose of contemporary realism is subsequently subverted by the placement of flat red silhouette soldiers forms (both modern and a historical) amongst the scenario. This joyful contrast between our own self-managed ‘little worlds’ and our failed societal attempts at creating order out of chaos, all come to the fore with this simple, yet charged visual counterpoint. The title neatly reflecting the artist’s commitment to expanding not reducing the semantic potential of his work.

Delacroix also liked to put himself into the picture, only his motive was clearly driven by some misplaced phallic desire. Although not many artists can claim to be album covers for both The Pogues and Coldplay. Gina Birch has appropriated and retitled ‘Liberty’ to ‘When you ask me about violence’. This act goes some way to emasculate the original. But then if you add in among other steps, the placement of a large blob of pink in the foreground, beneath the original unsettling depiction of what appears to be dead women with her legs raised akimbo. Coupled with the over lay of cock-less classical sculptural balls on the groin of the floppy hatted pistol boy. She slams home a much needed re-appraisal of problematic historical misogyny. Despite all the best of Delacroix’s socialist intentions, he like his contemporaries, painted partly with his dick. Visually this and her other re-workings of macho art history exude a heady cocktail of raw energy and gesturally expressive figuration. In this work Birch does much more than a simple re-write of historic male mythologies. It is an utterly emphatic painting.

On a calmer note, the painting ‘East Street’ by Tom Farthing, depicts a wind battered striped gazebo like structure, in a state of semi collapse. Adorning the front of which a tropical fabric print hangs. While partially clued in by the title, there is no attempt to ground the image in a wider sense of place. There’s a good chance it is referring to East Street Market, London, which kind of makes sense. But even then as an image it gives you a fragmentary sense of being somewhere, but nowhere in particular. I kind of get the feeling that like many sincere painters, the source material is more a thing to hang a painting on rather than an active strategy to encode negotiated readings for the audience to ponder upon. It is arguably more about shape, colour form and painting and is both compositional dynamic and visually arresting as a painting.

The other artists in the show are; Michael Coppelov who presents a captivating undulating abstract city scape ‘The seven bridges of Königsberg’ which offers the failed promise of cartographic sense, redolent of other great mind bogglers like Escher and Paul Noble, with a lovely splash of painterly colour. This denial of spatial logic leads the eye on a rewardingly lilting navigation to nowhere.

Eigil Nordstrøm, whose ‘Ancient Woodlands’ tumbles off the wall bridging the illusory depiction of the dense woods with sections of planed painted timber spilling on to the floor. Gently reminding us of the environment, and the distance between images and their subjects, as well as their inextricable connection in a semiotic sense, as highlighted by the recent toppling of monuments globally.

And Charles Inge, whose painting ‘Imaginarium’ depicts a bell jar jammed with ephemeral matter ranging from recognisable elements, for example his meticulously painted house flies, some dead others alive and crawling over a suspended white lump evocative of something not quite discernible yet familiar. Something that you might find in the bathroom bin. To other instinctively loose renderings of abstracted eclectic stuff. Collectively viewed this triggers associations with fragility, eco-systems and a state of ever shifting global transience.

Whilst writing this I have Talking Heads ‘Stop making sense’ looping in my head. And for me this feels like the soundtrack to the curatorial vision of John Wyatt-Clarke and Michael Coppelov. Apart from being a great bunch of painters, there seems an overarching questioning of the ‘order of things’ only done with a lot more joy and dynamic energy than Michel Foucault could ever muster. I think many of us are drawn to the act of art making as an optimistic kind of ‘grasping’ intermingled with a desire to dissect and unpick the world. This show exemplifies this spirit. This is not the sole province of the artist, but unlike many civilians, artists take the important step to make time and create a space for something to evolve out of their creative speculation. This is why the world needs art. It is an affirmative act on the road to somewhere utterly impossible to find with google maps, but well worth a visit. The good news is the show will go ahead in LA next year.

This writing is supported by a bursary from a-n The Artists Information Company and Arts Council England.

It is the first of five ‘reviews’ of shows that got cancelled due to Covid 19.