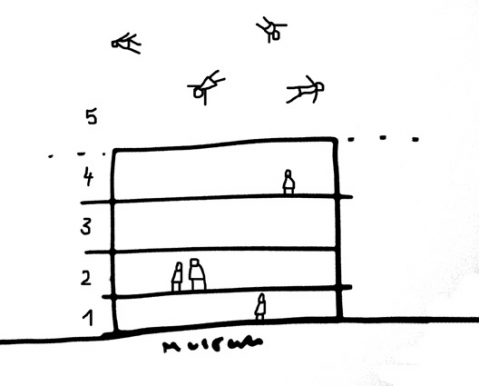 Central to The Fifth Floor is a responsive, calculated, engaged curatorial trick, one that assembles a kind of push and pull between the external – Liverpool, its geography and multiple communities – and the internal – artists foraging the interior processes of their work, practices and development of ideas, materializing them through progressive, observational, conjunctive techniques and frameworks. There is a sense within this project (it’s not exactly an exhibition, more a depository for a broader engagement between the artists, the curatorial angle, the array of communities involved and countless behind the scenes dialogs, countless negotiations) of a kind of informal, conceptual joke: Tate Liverpool has no Fifth Floor, the ‘space’ it refers to does not exist. Rather it infers a possible opening: an aperture between gallery and institution, audience and their approach, their accessibility and the artist, maintaining a objective distance at the same time as outlining viable experiments for participation, and the community, asked directly what they want from this gallery, this resource. The punch line to the ‘joke’ is a proposal on the gallery itself, a request for assessment, an incentive for contribution, a summation of purpose. (And in its design has an interesting kind of deterioration between an expected formality and a progressive casualness, moving the audience from bystander to accomplice.)

Numerous thematic strands run through these gallery spaces: imaginary and hidden processes and propositions, observational techniques, the authority of surveillance, performative platforms and investigations of official procedure, in particular the agenda and architecture of consultation. It draws upon notions of invitation, difference, youth, familiarity and the mutual while discussing and observing creative action, the processes of thought, autocracy and the author. On a broader arena its curatorial enquiry and approach reflects on a number of concurrent examinations of either participatory projects, where audience become material or socially engaged dialogs, where artists seek communities as collaborators: for example, the Praktika workshop at Deveron Arts, Huntly, which operates round a “The Town is The Venue” strategy, in a remote Scottish location and The Art of Participation, at the San Francisco Museum of Modern Art, a titanic museum show looking at over 50 years of members of the public as art collaborators featuring John Cage, Lygia Clark, Dan Graham, and Hans Haacke to contemporary projects by Jochen Gerz, Felix Gonzalez-Torres, Lynn Hershman Leeson, Tom Marioni and Erwin Wurm. It is an indication of the socially engaged becoming mainstream rather than moralistic and locally allied or relevant. What this project may also question is the abrasion between personal practice and the appearance of work and outcomes filtered, or distorted, or reassembled through community ‘interruption’ and speculation. The Fifth Floor is locally loyal (it comes from a ten-year process of dialogs between the Tate and its vicinity, as well as a speculation on legacies beyond the year of Liverpool as European Capital of Culture) yet its tendency is consistently extracurricular.

The project commences/confronts with a vast mirror; a kind of You Are Here signal accompanied by a reflection of Dan Perjovchi’s large-scale chalkboard wall that records numerous public contributions to its composition, erased and drawn over again and again, it is like Derek Jarman’s participatory painting or a Cy Twombly abstraction – all gestures and swirls, Perjovchi’s own mark-making almost indistinguishable from multiple public additions, made of chalk and saliva. Paul Rooney’s film The Futurist relies more on internal negotiation to space and acquiring, articulating and identifying individuality within specific geographic locations and cultures. He assembles a cast of stand-up comedians to narrate multiple anecdotes around accent, voice, mistake, melancholy and invention and the brilliance of the joke to communicate – potently – truths and possibilities. It has a grim realism, ripe with smoky and boozy absurdist renditions against more poetic, pensive deliberations. Peter Liversidge’s hand-typed proposals also equate the poetic with the ridiculous, creating a platform where multiple propositions and interventions reshape principally urban reputations, beliefs and standards. He is a wizard of the impossible, inviting the reader to speculate, with their own vision, on shifting their certainty, experience and acquaintance of place. Pawel Althamer connects and twins Liverpool and Warsaw around a shared love of football, similar to Roddy Buchanan’s work, it aims to celebrate the social and the mutual. Olivier Bardin’s Exhibition Continues installation looks at performance and being observed, a series of chairs confront the audience between the exit and entrance to the less formal rooms of the exhibition: the chairs are leather upholstered private club furniture, all upper class and moneyed, the work speaks about acceptance and rejection, and in its staged live art format is redolent of what Elizabeth le Compte of The Wooster Group states as the vigour of entry and departure to and from the live theatrical space. Rafael Lozano-Hemmer also uses spectatorship in his performance-based installation, which is potently framed by the ubiquity of surveillance by projecting words onto the audience that can only be ‘removed’ by touching another participant. It looks at the disparity between intimacy and action in public spaces, while technology and the lens become the equipment for control. Nina Edge assembles a thought game that scrutinizes the framework of participation, consultation and autocratic processes. Participants play an architectural game that serves as a device for inclusion/exclusion, while also observing the structures of thought, memory and decision-making, internal, external, social, cultural and political. It is a performative gathering, similar to the committee room, where abstractions such as policy, power, analysis, choice and involvement generate consequences irrespective of aspiration, integration, entitlement or inclusive ideologies. Edge deliberates on perception and the addictive and competitive nature of game playing alongside the ideological power of chance and systems of authority.

Less formal presentations occupy the remaining spaces of the gallery: Rineke Dijkstra has set up a photographic laboratory/studio that underscores the push and pull of The Fifth Floor as a whole. She brings her nightclub, adolescent subjects from the external to the internal and vice versa, revealing the process of her practice in an open agenda. While Swedish artists collective International Festival devise a communal, modular, flexible environment inviting numerous reconfigurations to the terms gallery, studio, stage, catwalk, screen. They invest in the space to become the host for the display of social gathering, social engineering. Meanwhile tenantspin, a community-based TV channel, collect, document and disseminate these projects, performances, readings, comedy shows, hobby clubs etc., as a whole via streaming video technology to a mass audience external to the Tate.

The Fifth Floor is a self-conscious restless animated instigation, one that confronts internal policies and procedures, tests audience and artist, displays purposefully concealed processes and invests in relational aesthetics, methods and theories glancing past its institutional rigidity toward a contrastive imagining of the museum as social playground.