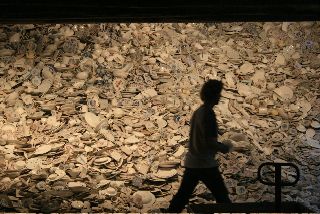 “How did she get to this point? – But she did make the birds,” asked a potter sitting next to me

Clare Twomey had just finished giving a talk to a packed room. We were left stunned by a revealing minefield of ideas, inspirations, relationships and collaborations with other artists and the experience of her fellowship at The University of Westminster. A risqué process of dangerous liaisons which other ceramicists would dare not contemplate was left open to interpretation and possibly confusion.

Twomey’s ideas and perceptions about clay are intact. The craft-maker has not been forgotten as she shows her respect for traditional crafts and embraces the maker. The use of porcelain and other clays is used in the base of her work, but equally important is public participation and interaction. These areas are interrelated to create a sense of belonging: the mixing of clay, dialogue, people, environment, time, space, preciousness the list is endless. She is not only the maker but harnesses skills of other makers to assist in the creative process depending on the project. Some projects which involve individual pieces could take over one year to complete.

An interesting picture showing a temporary installation at V&A of 4000 birds made from Wedgwood Jasper Blue clay which flooded the Cast Courts over a temporary period and could be taken away by visitors’ explained the fragility of this type of work. The realisation of an idea could take just as long.

‘Some of these works have taken years to make, moments to destroy, disappear or be stolen or become somebody else’s possession’, Clare Twomey (Ceramic Art London, 2009)

We are far away from the production potter or the studio ceramicist. This is a dialogue between ceramicists that inform their practice and extends this way of working beyond their rooms into other artistic arenas, which was also highlighted in an artist-led newspaper called, ‘in conversation,’ handed-out on the day. Other images of artists working in similar ways in museums, old factories etc., has attracted the financial support of local industry and interested clients.

The term ‘installation’ to describe such works is now old-fashioned and this tends to happen when certain art forms become the norm. But has this way of working become acceptable in the ceramic world?

Twomey’s work treads precariously on a knife edge of seduction and purposeful intent, yet something else is ‘going on’ as she leads us into a dialogue of where we place this type of work in 21st Century. Her work is informed by a transient environment that is crushing the old to replace with the new sometimes blurring the boundaries of ceramic practices and divisions.

‘How did she get to this point?’ The importance of collaboration, artists’ ideas and dialogue, travel and industrial support has supported this backbone of ceramic work.