THE JOY OF MELANCHOLY - a-n The Artists Information Company 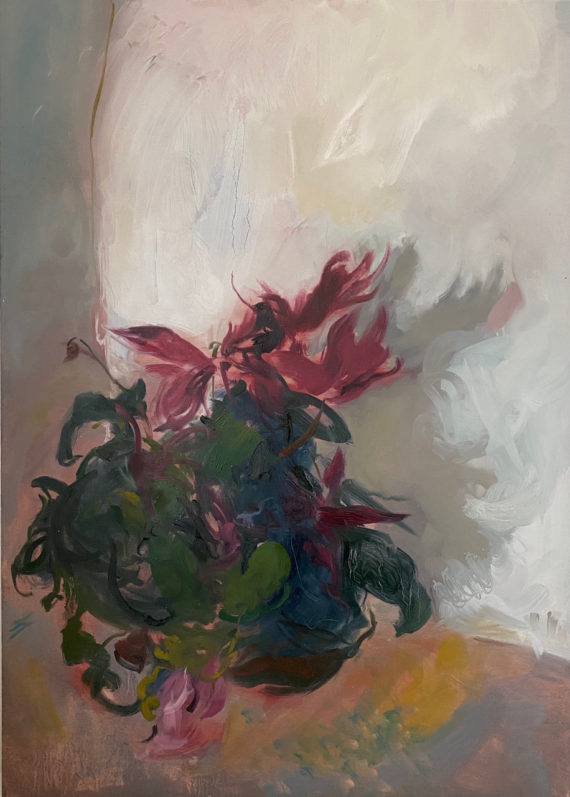 Serena Rowe, Between Light and Nowhere,

With her new exhibition, Between Light and Nowhere, Serena Rowe is rebuilding her website, discarding all the paintings on it. Since Covid, they no longer represent her.

“I think I’m a good girl, and I’m a pleaser, but this is the end of that now,” she says. “So I feel this exhibition is a beginning – that I don’t need to paint for anyone but myself, and she really guides me, an amazing guide for being honest and truthful.” 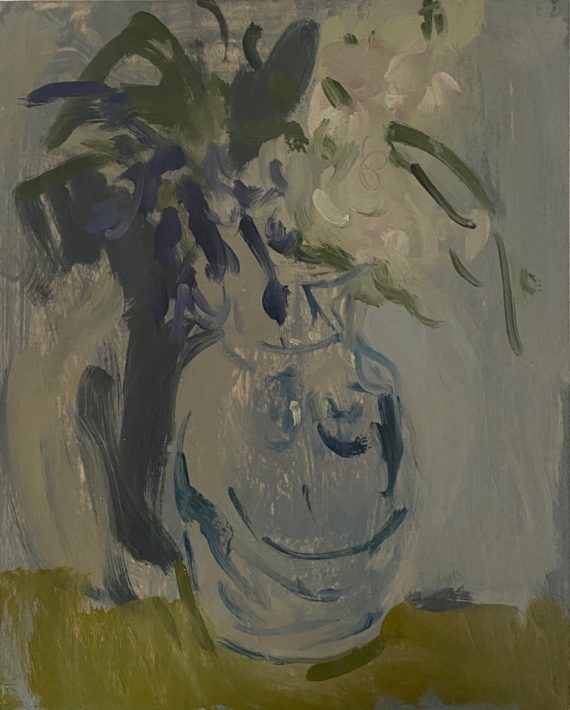 “She” is Joan Eardley, a Scottish painter less well known in England, who died in 1963 but was discovered by Rowe two decades ago and rediscovered by her this year. Rowe is about the same age as Eardley was when she died of breast cancer when she was on the threshold of success, as Rowe herself is.

The paintings of both women are powerful expressions, and in particular it was Eardley’s late painting The Wave, a ferocious, lowering presentation of an angry wall of sea, that Rowe saw in the Scottish National Gallery and which blew her away.

It was painted at Catterline, the North Sea coastal village in Aberdeenshire where Eardley lived and worked in her last years. In April Rowe made a sort of pilgrimage there to mark the centenary of Eardley’s birth. “The surprise was how banal it was, the opposite of dramatic, and it struck me – suddenly – that of course it wasn’t Catterline she was painting, she was painting herself”. 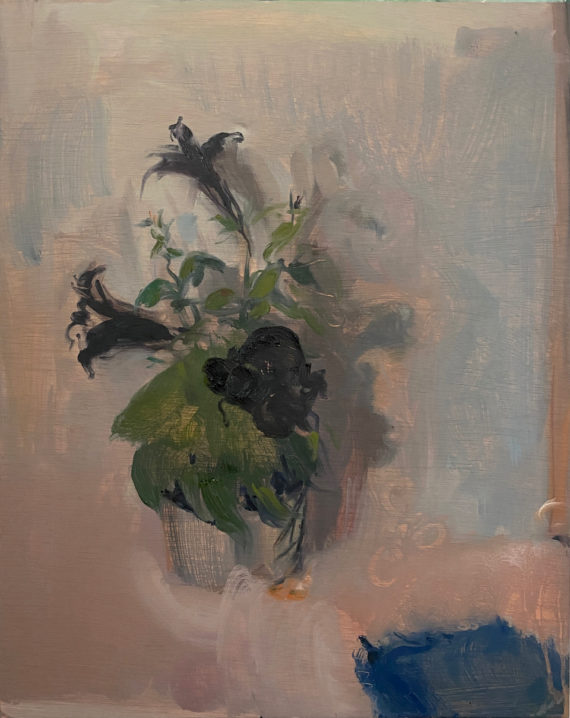 She did a foundation year at Chelsea before going toEdinburgh University for an English degree. She knew she wanted to paint then, but instead of an English art school she went to Florence to study classical drawing and painting – studio drawing all day, six days a week – and then, back in London, to the Prince’s School of Drawing (now the Royal Drawing School). Her parents live in Scotland near Dumfries and, newly back from Italy, while visiting them she called in at the Gracefield Arts Centre , and there she first encountered Joan Eardley’s work. But as a bonus it emerged that Gracefield had been given a government grant to promote Scottish artists (Rowe’s mother is a Scot) and it sent her work to art fairs in Glasgow and London. A painting sent to the Royal Glasgow Institute won a prize, and her career was launched.

Rowe’s subject matter is quite different from Eardley’s and the exhibition shows her deep appreciation of colour, the certainty of her marks that give action to the piece belying the term “still life”. There is an intensity that engrosses the viewer who experiences a sense of familiarity, a growing acquaintanceship, which can be a little unnerving. She prefers to think of them all as portraits, even of a bunch of dying cyclamen, in which she finds a personality, the essence of her success. “It starts with a feeling, an emotional connection, and then it’s trying not to overthink but to put the feeling in paint; as someone said, if you could say that in words you wouldn’t have to paint.

“It’s a sort of mind and body connection with the subject, and I know it’s going to be bad if I don’t have those exciting butterflies in the tummy.” 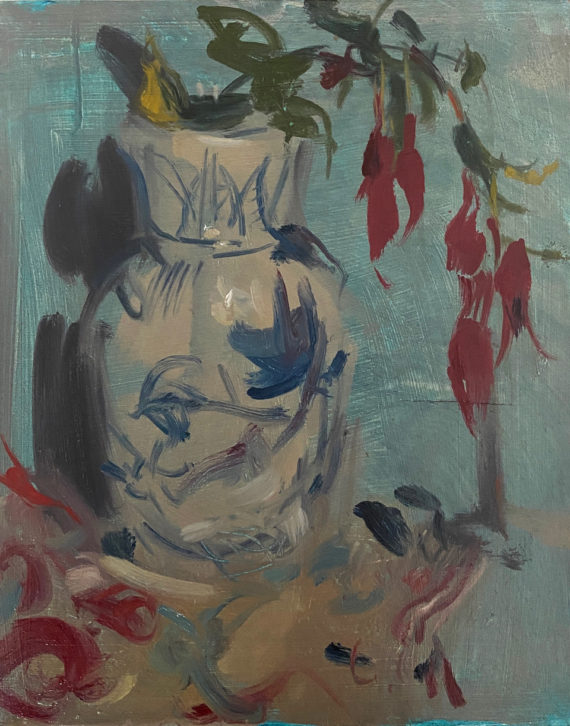 She has painted only in oil since she was 13, and only on wood, usually plywood: she dislikes canvas because of its bounciness, and she likes the gentle unobtrusive textures and solid firmness of the wood, which she prepares with oil, varnish and turpentine in a technique she learned in Florence. And unlike most painters, before she approaches the easel she has mixed all the paints she knows she will need, having instinctively visualised the painting already – “I’m creating my own box of crayons so I don’t have to think about it” – which takes almost as long as making the painting itself. Each picture will take 90 minutes, maybe two hours, but after the session is over she won’t return to the picture. It is finished. “I paint very quickly and if it’s working it’s working, if not I scrape it down”.

Lockdown was the turning point for Rowe. With three children aged ten to six she was away from her studio for four months while she home schooled. It was like being a housewife in the 1950s in which her whole life was filled with house and family, and she felt increasingly out of place. “I have these three beautiful children who I completely adore, but I needed to get to my studio, and when I finally did I had the space to breathe and feel untethered, unbothered”.

Last year she had a panic attack, “the months of quiet stress had finally caught up with me”, and concluded that she was no longer going to paint to please others. “I decided to make some big changes that I can’t keep painting safe – I was so cross! But I’m tiptoeing now, getting there, and this exhibition is all about that”. So there are 25 completely new paintings all made this year, in the exhibition whose title she has taken from an Antony and the Johnsons song that just seemed apt.

While she couldn’t visit her south London studio in lockdown, she could set up an Instagram dialogue with a group of other painters when they exchanged thoughts on art they found inspiring, so her studio wall is dotted with pencilled quotes of Rodin’s sculptural sketches, Titian’s Rape of Europa, Goya, which might make it to her plywood. She likes Velasquez’s paintings, often for his reds, and admires the Scottish Colourists, especially Samuel Peploe. She likes Soutine, and her drawn heads full of quizzical expression and intelligence are reminiscent of his. She almost never paints her children, but her sketchbooks are full of drawings of them – she hasn’t painted them because they are never in her studio when she’s working, no-one is. “I’m just trying to paint a bit more like I draw”, she says. “I think I’m more honest when I draw”. On a desk is a stuffed and mounted red squirrel sent by her parents, which she has drawn and painted.

Joan Eardley’s voice will be heard in the exhibition, a BBC interview recorded the year she died, and Rowe believes she was not the depressive many have taken her for, living in solitude by the menacing black sea: she was melancholic, a completely different emotion that is a positive basis for creativity rather than the negativity of depression, so unproductive. “I’m drawn to melancholy” Rowe says. “It’s a darkness but I don’t find it scary. Burton (the 17th century author of Anatomy of Melancholy) says it’s an itch that needs to be scratched.