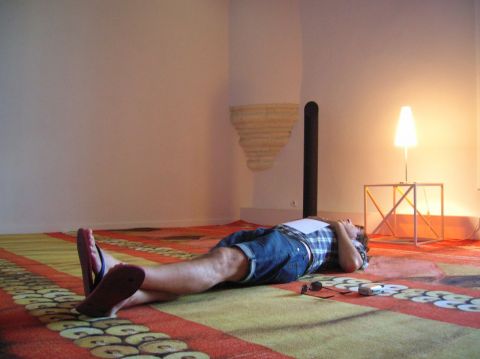 The map of the town isn’t all that good. I am being followed by the hideous look of a satyr protruding its long, curly neck from the corner of an ancient house. I swiftly turn my back on it, guided by some intuitional sense of direction. The river is still running on my left, I cannot hear its dark, heavy waters, only people and their dogs strolling happily at its sides. Soon it will be as large as the sea, its myriad of branches spreading out and merging into the Med. I find the entrance of the Réattu Museum by chance. Upstairs, in the outdoor gallery, a couple of old ladies are sitting on a sofa, resting their legs and chatting about the weather, oblivious to the artwork within earshot. I seat next to them and put on a headset. They instantly disappear, shapeshifting into shrieking and flapping seagulls, while a soft, slightly unpleasant voice of a young ornithologist, who prefers the company of birds to that of humans, arises from a clear, blue sky. I walk with him, together with Elise, the phonographist, trampling the grass under my feet, accidently knocking the microphone, feeling the weak autumnal sun warming my nose. I listen carefully to his ramblings about birds and reproduction. His voice is close to my ears and a strong wind is blowing in his hair. He doesn’t know what being in love is. ‘The only purpose in life is to reproduce’ he says, making me feel useless. A woman voice now murmurs her thoughts to my right, she is hesitant, yes she loves the birds, she comes and watches them at sunset, they give her pleasure. From the observatory, she can touch them at a distance, without disturbing them – just as I touch them now, the birds and the birdwatchers, from even further away. Through sound, paradoxically, I’m getting closer to people I don’t know, that I can’t even see, I’m infused with sociability, a feeling of sympathy and palpable intimacy, the kind of intimate bonding I sometimes create with characters from a book. The lady is single, but she still would like at least one child. I nod in understanding. She stops talking and we let the birds fly over us. I would love to stay with her a bit longer, savouring a moment without talking, a momentary connection. I wonder if Elise feels the same. The old lady sitting next to me is trying to say something. I signal that I can’t hear her. One can’t be in two places at once – I choose to accompany the bird lady. When I return to my soundtrack, she’s gone somewhere else with Elise.

The balcon d’écoute was installed in 2007 on the loggia of the Réattu museum in Arles to present and promote radiophonic and audio-documentary works, notably from the winners of the Phonurgia Nova prices. Elise Andrieu’s Parmi les Oiseaux was selected for the Prix Découvertes Pierre Schaeffer 2009. A secluded listening chamber has recently been added to the museum’s pioneering department of sound art. I’m searching this oasis for the ears and wander about the rooms. There’s a formidable wooden woman reclining on the floor, playing the lyre, and lots of Picasso prints and drawings on the walls. A series of six photographs by Dieter Appelt skimming the surface of water pulls me near. My eyes involuntary turn to the window where they meet the Rhône flowing below. I push a door and enter a small but comfortable space, entirely carpeted and designed, I am told, by Christian Delacroix. I lay on the largest cushion, flat as a stone, which I place strategically in the centre of the room. The quadrophonic recording soon invades the whole space, including my body. I feel a sudden chill as a cold and damp air is blowing from under my neck and is making my hair stand upright on my naked arms and legs. I am being pierced with tiny, swishing pieces of sound coming from all directions. They feel as pure as water, as hard as steel. Regular hammering blows on metal and softer, muffled strokes echo intensely in my head, leaving indents on my skull. Panning back and forth across the soundscape, they now come closer to me, I am descending deeper into a hole in the ground. As I close my eyes, a sweating darkness bleeds on the warm colour of the wallpaper. Soon the space opens up to a vertiginous cavity filled with swooping and steaming sounds, my heart lifts up in my chest as I start floating in this enveloping underground miasma. Among the beeping of cars, the screeching of trains on rusty rails, the human screams – or are they chants?, the burping and splashing of a giant overflow, I hear a distant bell, the chirping of birds, and the high-pitched grating of night insects gradually blending into the strident yell of a police siren. The banging noises have now become rhythmical, amplified, and my body gets the urge to stand up and dance wildly while watching over a dark cityscape. They abruptly stop and the clean and bright silence of the room takes over for a couple of seconds, giving way to another, lighter journey. Hanna Hartman’s whole composition is broken with unexpected turns and brusque changes of intensity, which jostles me around and forces my mind and body to constantly re-adjust and focus on the sounds, all of them plundered from the concrete world and craftily hashed up. That way, she doesn’t let me drift away from them, nor being swallowed by them. They resonate in their pure soundness. Sometimes a melody appears, or the sounds of a didgeridoo, or the funky rhythms of cowbells. Now something is bumping onto a hollow case that resonates like one of my favourite Pink Floyd songs and my heart lifts up for a few seconds. The melody ceases, and so my musical escapade. I am back in the echoing miasmatic strangeness, walking upside-down in a cavernous metropolis and, in my semi-consciousness of being here and there, I feel no urge to return to the surface. On the contrary, I relish being led by the ears onto this phantasmagorical journey, which I listen to as much as I create. The sounds enter my ears, my body and my mind and, as I perceive them, I simultaneously live them bodily and mentally, I interactively experience and produce them, inventing what I hear as I stroll about on my listening trip, never certain of where I am going next. It is this interactive, producing perception of the world which my listening to Hartman’s Cikoria brings to the fore, a world oscillating between the real and the imagined, the concrete and the ephemeral, the familiar and the unearthly.

Just before the end of the 40-minute piece, a couple of visitors enter the room and interrupt my listening, slamming the door and blurting out excuses. While we can shut our eyes or remain exclusively involved with a visual object, in the listening chamber ears must necessarily remain open and generous to others. On the balcon d’écoute, the binaural recordings diffused through headphones allow for the listener to shut out the world around and remain undisturbed. Quadrophonic compositions such as Cikoria demand that one stands in the middle of four speakers, enhancing the phenomenological listening experience, which includes the unwanted disturbance of a busy gallery. I secretly wish I could be left alone, immersed head-to-toes in my sound box, to create my dreamworld out of the soundwaves that I selfishly experience. This – the desirable individual immersive listening of quadrophonic recordings, poses an obvious challenge to galleries and museums. Musée Réattu’s spaces for sound art are, so far, relatively crowd-free, but I keep wondering how, when sound art becomes a ubiquitous medium in institutional spaces, the optimal listening experience will be preserved, unless crowd-filtering systems and precise time-management of listening areas are put in place. Of course, sound installations are sometimes designed for interpersonal interaction or intersubjective intimacy to take place. Hartman’s installation downstairs is designed for the listeners to walk on its false floor underneath which speakers have been placed, and to feel the soundscapes through their feet and up along their spine, vibrating in their whole body. Like in a Buddhist temple, one is asked to take their shoes off before climbing on the shiny red floor. Some people systematically stride around the room along its four walls before climbing down again, while others sit or lay down, attempting to listen to the murmur of the ground through their bottoms. While entertaining for the viewer, it is above all distracting for the keen listener. The sounds for Acoustic Catacombs, recorded in Arles’ underground tunnels and catacombs, leek through the floor in weak vibrations, failing both to seduce my body and to captivate my imagination.

Hanna Hartman’s retrospective, including Cikoria – a Journey (1999), is in the chambre d’écoute in Musée Réattu in Arles until December 2010.

Also on display is her installation Acoustic Catacombs (2010).

Elise Andrieu’s Parmi les Oiseaux is available for listening on the balcon d’écoute, together with the other winners of the Prix Découvertes Pierre Schaeffer 2009.