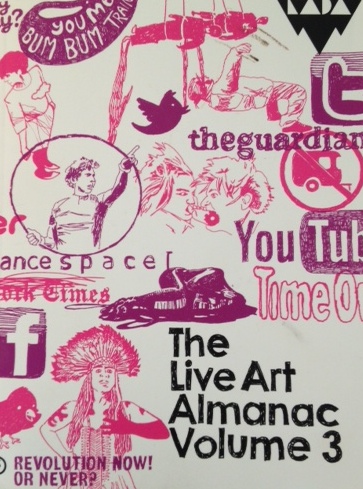 So Penny Arcade “legend, wild-hearted demoness bad-girl bitch” tells Owen Parry in Lineages of Trash, her words ringing loud and prophetic. Selected through an open call to feature in The Live Art Almanac: Volume 3, the interview can be found in Taste,Trash & Outrageousness, one of seven chapters of texts – articles, reviews, catalogue essays, emails, blog posts and PhD extracts – originally published, shared, sent, spread or read between January 2010 and December 2011.

Whereas almanacs of yore might have been used to identify change in the soil, to watch the skies and chart crop yields, as calendar-like tools for productive consultation on changeable conditions, the editors stress that this one shouldn’t be relied on as authoritative survey. However, published by Live Art Development Agency & Oberon Books Ltd, and edited by Lois Keidan and Aaron Wright, the Live Art Almanac:Volume 3 presents seventy seven texts’ worth of key moments, important works and recurring themes for performance and live art, both internationally and within the UK.

Heavy theorizing has been kept to a minimum, placing emphasis on an experience unrestricted by cover-to-cover reading. Despite the broad-based appeal that the book will surely have, there is a resolutely critical component. A chronology of events, or even the casual ‘dip in, dip out’ format, isn’t what connects these writings, but rather how each piece holds shape and integrity well after the event – after publication, after sharing, after re-reading – making such associations so generative and possible in the first place.

Iconic personalities (of the stage, pedestal or podium) rage, pose, show off and strut, while the texts swing from serious to comic, touching to trivial.  Away from the melting heat of the spotlight or the screen, everyday events (domestic violence, donkey sanctuaries, the peculiarities of online friendship, arts administration) are also captured.

The texts are loosely grouped by theme into sections; Performance Art and the Institution; The Presence of Performance in Pop Culture and New Media; Performance, Activism & Public Protest; Taste,Trash & Outrageousness; On Stage/ Off Stage: Performance and the Theatrical; Festivals, Scenes and Strategies: From the Local to the Global; And the Rest: Obituaries, lectures and miscellaneous writings. It is an astonishingly diverse selection and  impossible to pinpoint favourites. There are certainly highlights though, and these include writing on the phenomenon of actor James Franco’s portrayal of the artist character ‘Franco’ in the US TV series General Hospital, on Lady Gaga, copycatting and appropriation, and E Hate Death: Performance after Genesis P-Orridge by Dominic Johnson. I also appreciated Jane Trowell’s essay on oil money, ‘art-washing’ and state arts policy, Cat Harrison’s Opportunities in Crisis, and Concepts are Mental Images: The Work as Ruin, by Marta Jecu.

Yet it’s at the rougher edges, where subject matter spills out from within the themes imposed by chapter, that those editorial misfits bring to mind the collaborative impulses and networks of transmission that run throughout the creative and discursive practices of live art and performance – the integral parts of thinking, making, talking and writing.

At times, the almanac lives up to its purposes of prediction as well as reflection, and some of the writings are disquietingly poignant in this sense. For instance, Mary Paterson’s insightful Reflections on Access All Areas, Emma Geliot’s enquiry into a troubling expectation for disabled artists to be ‘inspirational’ in Camp DAG, and Marcia Farquhar on artist Katherine Araniello in No Pussyfooting. As a trio of texts, certain important ‘key moments’ are freeze-framed in the lead up to the spectacle of the ATOS-sponsored 2012 London Paralympic games. They accrue a deeper, more complex significance now, just as proposals to legalize assisted suicide are debated and the Con-Dem government* intends to cut the Independent Living Fund.

And then there is what sounds like a disclaimer but is in fairness an effort towards editorial balance. I have my own: I read the book’s introduction only after starting to read through the chapters. Who picks up a book and starts from the beginning anyway?

The artist was not only present, but especially active, warns Aaron Wright in the introduction. Marina Abramović, one of LADA’s own patrons, does receive an extraordinary amount of attention throughout Volume 3, but this is understandable. 2010 was gripped by Marina Fever. Abramović’s blockbuster MOMA show and first retrospective, The Artist is Present, included a combination of new and recreated performances which delighted fans of the artist but also prompted questions of reappraisal. The almanac’s first chapter, Performance Art and the Institution, opens with a serious, brillant evaluation of context, authenticity and re-enactment in Abramović’s later work, with the essay Performance and the Reconstruction of the Ephemeral by Cristiane Bouger. Later, Hari Kunzru’s own sharp analysis of contemporary performance art as exportable monetized celebrity culture goes on to name the “quasi-religious hysteria” surrounding Abramović’s recent re-presentation.

Reading through the many mentions of Abramović in the almanac, I remember how often, elsewhere, Abramović is referred to as the ‘grandmother’ of performance. I’ve always thought this an odd description for a hugely influential artist but mostly because this term, while evoking maternal intimacy and procreation, places a strangely unproductive remove between artist and audience. This distance seems to move such a figure beyond the reach of critical dialogue, which is clearly antithetical to the bonds of community and kinship on which live art tends to thrive.

Just as we’re at the mercy of our own memories and associations from charting a course through a book of this kind, an open call comes with the vulnerability of omissions, as is suggested in the introduction. But what remains unsaid or left out can be informative too. None of the selected pieces make explicit reference to or comment upon the gala dinner designed by Marina Abramović to entertain wealthy MOMA patrons using young, naked and objectified female bodies. There are a couple of URLs directing more inclined, and arguably informed, readers towards Yvonne Rainer’s high profile criticism of the event, but this absence is noticeable.

Penny Arcade, prolific, outspoken, but by no means an untouchable icon, is undoubtedly a tough act to follow. Yet Aaron Wright’s piece on The Famous Lauren Barri Holstein, which follows the interview in the book, articulates why such staged performances of leaky, eruptive, defiantly deviant bodies are far from archaic. What audiences can or can’t stomach is usually a reliable sign of the times and points to what must change. Arcade may well be right about the fragile borders of decency and respectability since the body, muted or mouthy, is always so performatively politicized.

I give Miss Arcade the last word.

“You know if you want to shit onstage, or piss, frankly I’ve seen it for years. But with no content or context?! That is the death of ability, the erasure of history, the ignoring of lineage, of a lineage that each young artist is part of.”

*This review was written a while before the May 2015 election.