THE MEETING ROOM:A Space for Minds to Meet - a-n The Artists Information Company 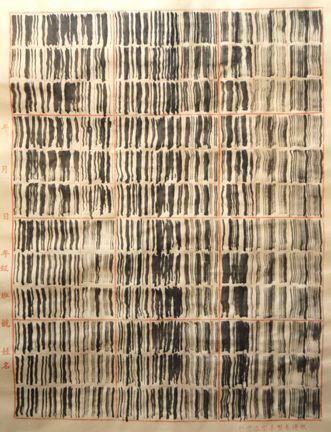 “This exhibition sets out to provide a space to host investigations into the moment when a thought becomes tangible. How might we represent the mental world in a physical form? How can the transition between mind and body be interpreted when the bridge between is unknown? Or is it that the physical and the metaphysical are one and the same thing rather than two distinct entities? Is it that the processes of the brain are the mind?” For some the question was answered long ago, when Gilbert Ryle exposed the absurdity of the ‘Ghost’ in the machine in ‘The Concept of Mind’ in 1949.Each time I visit Kaleidoscope, I spend a little time looking at the ceiling. It is a composition in itself, shades of Paolozzi, with fan-filled portals, loft-type ‘hatches’, metal gauze grilles, lighting galleries, rafters. Appropriately now, does it appear to strive to be machine to its ghosts on the walls below? My initial feeling on entry is a sense of release in a show where all pieces have space and can breathe. Rikka Eiro’s three photographic images are of soft light whose source is outside the image. The light in its encounter with architectural surface evokes presence and memory of a half-remembered kind. I can sit quietly with this deja-vu feeling of knowing. Echoing the origins of photography, they are ‘drawn’, photo-graphic, with breadth of tone and absence of stark contrasts.Clare Smith’s piece, ‘Moments ’11’, smaller, on Chinese character practice paper, performs a repetition, or is it an evolution, of black marks in the red squared practice grid. We too are marks. None repeated and all similar. Like examining a photograph of a crowd, characters emerge anonymous and singular we ask, “Which one am I, where are you?” Matt Bray’s work, in which a crowd of cartoonish portraits hint of menace, is made with thick paint, bright contrasts, lime greens, magentas, lemony yellows, blues and white. Sharp fruit pastille colour for the viewer’s eye is applied in single unequivocal strokes and dabs. John Bratby’s brats stare at us, portraits from the mind, grotesque horror- comic characters. The characters in ‘Being and Nothingness’ are suspended in animated, agitated paint.Joanna Jones’ paintings gently layer depth in egg tempera. My initial response is to feel the space, the layering, wafting movement, and then to wonder ‘How is this done?’ But should I ask?Their surfaces and movements are considered in the way that tidal movements ‘consider’ the presence of whatever drifts, here and there, back and forth, rhythmically symbiotic. The works appear to be sections cut from a larger canvas and ‘wrapped’ onto their stretchers, enhancing perhaps the feeling suggested by the titles ‘Connected’ and ‘Passing By’. Alternately, intentional or not, wrapping the stretcher sides obstructs the illusion of depth on the frontal plane, introducing an element of volume in a three-dimensional object.On the opposite wall, Gillian Robertson’s ‘The Cloud’, depicts reclining Greek Gods, partially obscured by the soft veiling of the cloud of the title. A circular motion is implied in the composition and manner of painting. Mountains are suggested in the background of a work that can be both looked at and looked into, in which colour and shape as things in themselves cohabit with with depiction. ‘Mind is where Soul Meets Matter’ is one of the aphoristic statements in Stephanie Smart’s piece ‘Know Thyself’, a small paper kaftan. It sits, framed behind glass in the manner of a museum exhibit, or as she puts it, ‘…..to stress the ephemeral and fragile nature of our impressions.’Architect Bradley Starkey’s model of a levitating pool canopy is constructed as a cork lattice with magnets regularly spaced to hold the form magically and magnetically in space. His practice website informs us that “…Bradley investigated the subject of Architecture and the Spiritual through the methodology of architectural model making. He pioneered the use of magnetic fields in architectural modeling to create levitating architectural structures.” www.starkeytect.co.uk This piece along with Stephanie Smart’s ‘Kaftan’ are ostensibly the only pieces with ‘functional’ connotations in the show, and invite comparisons between different kinds of object and the manner in which meaning arises. The introduction to David Bower’s film, ‘Defining the Ineffable’ develops the theme of the show. ‘It (the film)…..is a “Large Hadron Collider Experiment” based upon routines performed by dancers with a limitation placed upon them, such as being blindfolded, which determines the manner in which they explore a specially created ‘world’. A person in a wheelchair explores a small room, someone else dances with crutches. Transition from scene to scene is achieved via drifting clouds and a mysterious looking image somewhat like a radio mast. Down one side of the larger square image, are three smaller rectangular images in which dancers explore. I watch two versions of the film, the first unintentionally. Two silent white speakers, sentry-still at either side of the projector, lend poignant anxiety to mute exploration. As I read the speakers echoing the dancers’ limitations, the film is an object amongst others, a physical presence in the gallery. The second viewing with the soundtrack feels initially less powerful, the sound now projected, somehow distracting, the image pinned to the wall, a different object.Representing the mental world in physical form begs the question ‘What is the mental world?’ to which the reply surely is everything that is thought; we think what we create. The notion of a ‘transition between mind and body’ is redundant in a way in which perhaps the idea of a moment when a thought becomes tangible is not, although if it is not too pedantic, thoughts ‘become’. My thought and its tangibility are simultaneous, indivisible.

The exhibition is curated by Duncan Brannan, KCC Arts Offficer