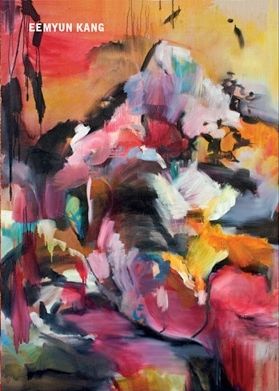 The Mountain Where Wales Once Lived at the Union Gallery in Teesdale Street E2 provides an experience of looking at paintings that is influenced by a sense of dialogue between the artists on show. Eemyun Kang selected Alisa Margolis and Dolly Thompsett selected Suling Wang, and none of the four had previously shown together before this exhibition took place. Painterly methods in the four artists’ work adds further dimensions to the painterly dialogue.

The broad sweeps of colour in Eemyun’s large vibrant canvas contrast with the gel-like amorphous blobs in Alisa’s earthy “You Are One of A Thousand (Forest Nude 3)”, drawing attention to her more cautious yet seemingly randomised composition of slight gestures, small spills and various different methods of application coalescing together into an ambiguous space-form. Part of a larger series that was recently installed in the forest of Baden Württemberg, the painting seems weighed down by the accumulation of marks, organically building up into a complex floral-marbled surface quality. Eemyun contrastingly has created a vast airy storm of fresh inky drips and grey stains, a colourful yet weathered vertical landscape of angled planes and suspended crevices.

On the opposite walls, Suling’s straight from the tube colours lend her decorative, undulating landscape forms a feeling of the synthetic, echoing the sickly glittery glowing holiday huts and palm trees in Dolly’s heavy resinous landscape. The dark glassy surface of Dolly’s painting is created through a dense working of broadly brushed-on resin, to imply a mysterious chiaroscuro buried townscape shining in the distance. Her selection of Suling’s utopian-esque repeating twisted decorative landscape-design of rainbows, kingfishers, lakes, waterfalls and mountain ranges seems intended to provide a light relief. Yet they are also connected through their motivation in the subject matter, a sense of overwhelming human experience/intervention in a natural landscape.

The show at Union Gallery feels like a good exercise for the artists who participated both by selecting co-exhibitors and in exhibiting their own work. It also presents a real potential dialogue, seemingly bypassing the choices of a curator. The result, I found, was that I was inspired to put myself into each of the artists’ shoes and imagine what they personally thought of their peers’ work and practices. As an exhibition of painters, it was also interesting to imagine the potential cross-fertilisation of methods and techniques, as well as the different cultural backgrounds – Korea, Ukraine, London and Taiwan. Yet the curator’s hand was still present, in the original concept and the fact that Dolly and Eemyun were selected originally by the gallery. As a result, rather than simply looking at the connections between the artists who selected each other, it became more a case of seeking out the differences between the two pairings.