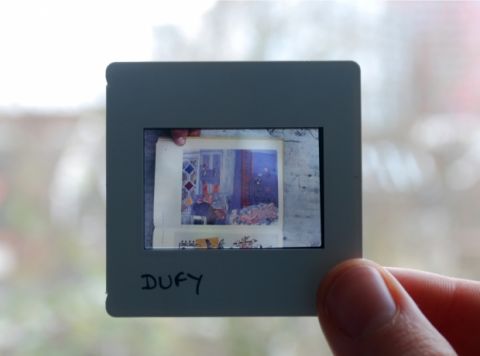 There is space here, room to move, the gallery is airy and the work breathes. The audio tracks cross each other and are crossed by the sound of the slide projector. The openness of the installation suggests at first that there is not much here, but this is countered by the way the sounds occupy the room, and how the elements of the show interrelate. The things in the space are off-centre, are unbalanced, placed within the space in an uneven, off kilter fashion. They draw our attention to corners, empty areas, junctions and surfaces, the ‘not work’ as well as the work. My experience of the space is of a larger piece composed of the six listed elements; elements that are ‘read’ on different planes, vertical and horizontal, that are framed or open, that become part of each other, and extend the others. The conversation between these parts remains in motion, not settling into a stable legible or graspable whole.

The images within the show operate as documents, as records, and as representations. There is a sense in which a narrative of photography is told by the images, a story of how photographs are pictures of things, how they frame and are in turn reframed. A series of black and white prints from a multiply exposed roll shifts between being interpretable as a layering of specific times, places and actions, evidence of what, of ‘something’ that has taken place, and a double spread of newspaper layout, or photo-story planning. They are presented flat on a pair of trestle tables, in two neat matt black frames. I scan the images trying to work out the sequence, of image to image, of sequence to sequence. Another set of images are shown on a slide projector, 20 slides looping in their repeated sequence. These are linked by their content, they show reproductions of paintings of interiors, and by their manner, as they have been casually framed, loosely cropped, with fingers, edges, other images disrupting the frame. James selected this set from slides found in a school art department, and their material quality is evident; we see the scratches and smuts on their surface, we hear the rattle and clack as they load and rotate. Shown low on a wall, near the skirting board, they draw attention to one of the more domestic structural details of this public space.

The largest element of the installation (perhaps excluding the audio) is ‘Imprint’, a block print occupying the largest wall of the gallery. In greens and blues and greeny blues and bluey greens of blob or leaf shapes and smudges, it is dispersed across the wall. With a wide broad swinging rhythm the shapes recall the tricks and moves of the skateboarder who can be made out in the photograph sequence, as well as abstract forms visible in another layer of those images. They bring to mind the forms of Modernist sculpture such as those of Barbara Hepworth, whose work appears in another pair of found photos. The large rough irregular marks might have been made by a flying figure bumping off the wall, as the scale is of a large physical energetic gesture, athletic in its sweep. And yet, in earshot of the passages read from a Robbe Grillet text, these marks become traces of a squashed caterpillar or piece of rotten fruit. They slip between being lively and dancing, to being the flattened evidence of a death. Their origin in the ordinariness of corrugated cardboard, with its texture and folds and creases, and the uneven application of the paint in smears and blobs, sits against the cut edge of the printed mark. And then that edge is lost and the mark becomes a skid, losing its identity, spreading into the wall, merging with the account of the dead centipede.

The colours in ‘Imprint’ suggest the outdoors, perhaps a forest, and also echo a furnishing fabric (from the 1960s or 70s), adding another domestic reference to this otherwise hard unhomely space. James’ installation disperses ideas and motifs of the domestic to intersect with the concerns of Modernism, nudging the abstract objective formalism with emotional smudge and blur. The edge of the Modernist concept is smeared by the fingerprints of the researcher, a Hepworth sculpture stands in a suburban garden beside a blue shed, a nouvel roman text is read in translation by a young woman with an English accent. The personal or individual description and commentary flows over the functional and formal architecture, as the technique of photography undermines its own objectivity. Layers of exposure build up and obscure each message, each moment of record, and then these accidents are framed for focussed attention. James’ installation operates across the domestic and the public, across the intersection of affect and object. The elements brought into conjunction here infect and inflect each other, holding any resolution in suspense, as evidence and record are spilled with feeling.