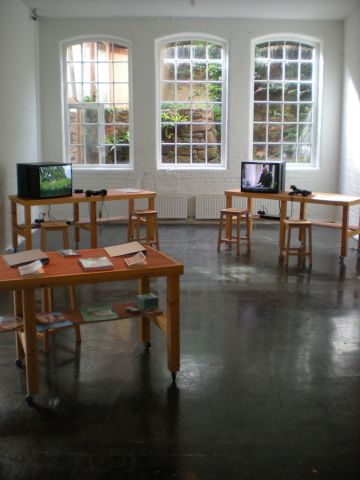 PUT [GAB7]
A point – not of completion exactly – but of focus

PUT [GAB3]
how to clean a Thermos, how to make nettle pesto, how to say hello to a horse

PUT [GAB2]
The Recipe Exchange expands the idea of recipes to include shared instructional texts for a whole range of practical activities.

PUT [SAL1]
Everything we do, from how we make coffee in the morning, to the clothes we put on and the words we use to greet the first person we see, is cultural creation. In our own cultures, we are always producers as well as consumers.

PUT [KES17]
the “meaning” of a given work is not centered in the physical locus of the object, or in the imaginative capacity of the single viewer. Rather, it is dispersed through multiple registers. These include a spatial-temporal register, in which the work “means” differently in different locations and times, as opposed to the immanence that is characteristic of modernist formalism. […] There is thus no single “work” to be judged

PUT [SAL2]
We are the creators, inheritors, owners, and consumers of languages, cities, customs, values and ideas. As artists, we are collaborators whether we mean to be or not, working from the cultural context built by countless others, contributing to the work of others as soon as we release what we do into the world.

PUT [ACO4]
pastimes include sewing and needlecraft, as well as visiting grand houses and gardens. They have lunch in the pub sometimes

PUT [HEL3]
Capitalist ideology has attached the greatest importance to ideas and authorship of the individual (Barthes.1984:143) especially in the realm of art practice therefore the concept of modifying or repeating someone else’s ideas is contrary to this (Albert 1999).

PUT [MAG9]
Anxiety, concern and conflict might be part of the practice in the same way that curiosity, hospitality and kindness are hoped for. This is practice in flux, nomadic practice that exists in the common.

PUT [GAB12]
The ‘recipes’ that are swapped are, in many ways, tools for self-definition and social interaction.

>>PUT [FAR3]
a strong community spirit, which shows up in a variety of social activities as well as in displaying a united front through the Farringdon Residents Association in the face of certain recent planning “threats”.

PUT [ACO2]
Often, many of the people who live in this sort of postcode will be retired home owners. These are known as type 32 in the ACORN classification and 1.02% of the UK’s population live in this type.

PUT [HEL36]
The recipe is a thing and when shared, enacted, modiﬁed or run it enters into dialogue with other things, with us, with the situations, with other codes, with machines, with the outdoors

PUT [GAB3]
relinquish your position as spectator and join in