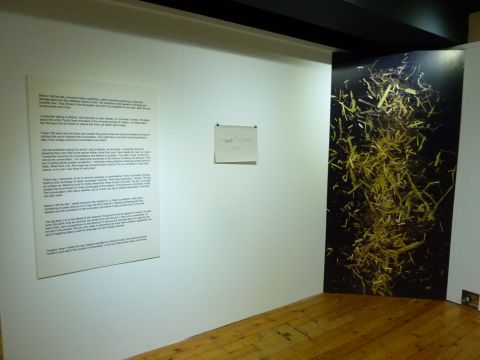 Across 2 sites, the exhibition acts almost as the process of archaeology; bearing both representations of finds, discoveries and interpretation:

Class 1 Project Space is a prefabricated white space. It houses the main body of work made by Bethan Lloyd-Worthington:

The drawings are clustered geographically, the artist relating her direct response to site, to put the viewer at the point of excavation: edge of trench, view of artefact, but also brings us to the surface of the works and allow us to enjoy their materiality; these are not representations; the drawings, prints, etc. are objects in their own right, having careful embellishments of gold leaf, paint, paper that exist in the present, rather than echo the past. Objects, place, motif has life, requires careful examination and speak more of the inexact and untrustworthy memory than the meticulous diagrammatic survey. They are carefully rendered on site during the course of the excavation. Two coloured works sit under the windows at knee height and provide solid supports for the more ephemeral drawings. The central focus is a sculptural piece; a photographic panoramic view suspended from sturdy string and requires the viewer to duck and step inside the circular piece. The joy of it is in both the pleasant revealing of this particular viewpoint, but also in the isolation of the viewer from the rest of the exhibition, one has to trust the artist to share in this privileged view…

The reference to Street House dig is not easy to find, if one is needed to view Sarah Riseborough’s installation. The piece is constructed with white, translucent plastic that from the wall where it has been taped, or suspended, and acts as a cover, a cover of a cover. In places, adhering to the wall by static electricity, shapes cut from the sheets reveal an area of pristine white wall- and in the viewer negotiating this view, the plastic might come unstuck, it ripples when the door is opened, when people venture under the canopy. On the wall, cuts appear in the paint and a small motif in gold leaf-

Gold leaf is common to both artists work, yet, both arrived separately at this historically familiar embellishment for the treasured, the significant. Gold as transformative element, or as the transformed yes, but it is not such a direct response to the much-publicised finds kept at Kirkleatham Museum where the exhibition continues. The work is happened upon in the course of the archaeological interpretation, which sets about to offer an experience of the site as a place in time where people lived out their daily lives, rather than simply a display of artefacts in cases. The artists’ space acts as a kind of intervention not entirely separate from this display. In many ways it mimics the appearance of the museum information- the display boards and use of text, available activity sheets and interpretative material. The text directs the reader through past, present and into an imaginative future and presents and re-presents an idea in different ways; looking at how one might accept information as truth. Dominating the exhibition is an 8ft x 4ft panel cutting across the corner of the space. It is a digital image of scattered straw and appears somehow to be a 3 dimensional image. It moves. It is quite golden, but quite raw in its presence as material rather than information. The boards are separated by two prints of Lloyd-Worthington’s drawings that are embellished with gold, hung from bulldog clips, uncomfortably fragile they ask for attention yet, repel the sensitive- they move, they have no protection from hands or mishap. They break the known conventions of a public museum space not appearing behind glass, not authorising behaviour of a particular kind; they are in the same room as colouring sheets, as dressing up costumes- there to be handled, taken away, even. The other piece of work, small panels of ‘jewels’ (abstracted images from the straw digital images) are, too, golden- between the two artists, questions about the authority of the image are asked. Lloyd-Worthington communicates the fragile and precious nature of the quality of the artefact, Riseborough, the reading of the ordinary and mundane as the source of gold.

Is this an exhibition across two sites, two exhibitions or an exhibition of two parts? Visually, Worthington’s prints link the spaces, yet the spaces are likely to be visited by different audiences with different levels of confidence in experiencing the work on display. Riseborough’s work directly acknowledges this difference in space and Worthington brings the situation of the residency present.

When one views an archaeological dig, if there is understanding, if there is knowledge of the vocabulary of marks that are man-made, or patterns that indicate the presence of human remains then information is available- a reading is made. It is a specialised language and without it the visitor can only recognise the appearance (as an excavation) as significant, but not what the information reveals. In the same way, at the moment of excavation, the artefact exists at its most valuable state (for information) and once it is removed, if it not of some obvious material value then it can become meaningless as well as redundant. The museum interpretation must furnish the audience with the context, either as authoritative text, or experiences of the senses meant to enable a sense of the importance of the information, to make a connection between archaeologist and audience. The substance of the information must build an accurate survey of material and interaction with this material, on a particular site. Bringing time, place and material together in a particular way, though, is, as the exhibition appears to relate, bringing the present acutely in focus. The props that authorise the kind of imaginative engagement required, cannot hope to connect in the same way the placing of an object in the hand, or the discovery of something in the soil. Is that the significant primary experience? What are our connections with ‘past’ meant to give us? What attentions are we meant to bestow upon ‘past’? The interpretations are not empty gestures, though, in their opportunity to create new histories and personal myth around family ritual and social wellbeing and esteem.

And how do we know, when we are in these designated spaces of exhibition, of interpretation, that we are not under the thrall of the archaeologist-as-magician, and acting out, time and time again, exactly what this presented part authorises us to do?