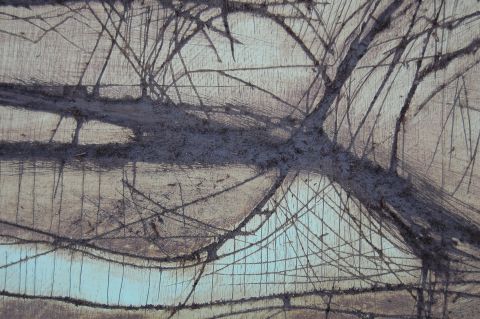 As an art form painting has been around pretty much since Lascaux and the biggest single handicap when looking at anyone’s paintings between now, then and the middle bit is the frequently unhelpful problem of comparison. It is very, very easy for any given strand of the historical canon, to hover like a spectre above that to which you are applying your carefully focussed occular attention. It is equally as easy for it to block further critical investigation.

So show me a viewer who looks at this particular body of work and doesn’t start to make connections with abstract expressionism and certain key Spanish modern artists and I’ll show you someone in need of an art education. That this work carries heavy stylistic referencing is there for all to see, but at this juncture, I need to differentiate between what constitutes stylistic referencing and the sad world of ‘lookalikey’ plagiarism, (and that’s without getting into the appropriative agenda).

The former is the consequence of knowing. Whereas plagiarism is the consequence of a lack of knowing. To put this work to the test one has to ask, is it additive? That is the artist evolves what fuels them into something else in their own right, perhaps a like a distant second cousin, or in a process similar to David Nash’s idea of art history as compost. Or is it subtractive? That is they take but give nothing in exchange. The former holds hope for redemption, and possibly something much, much, beside. The latter is on the road to nowhere, in essence derivation without departure.

The answer lays in the depths of the paintings themselves. To start with they are well crafted, by this I mean the paint is moved and scraped with efficacy to create semi abstract configurations of pattern, shape and at times recognizable forms. They are rewarding to the eye, but offer more than sole hedonistic gain. They challenge the horizontality of the picture plane creating a push-pull between form and line. Glazing is used on some sections to resist the illusion of spatial depth while at other times the eye is drawn deep into the suggestion of another dimension by soft pools of dark matt colour. They are frequently (but not solely) dominated by a palette of autumnal colour. They are well painted, and that its self is easier said than done. They are deep, complex and resistant to literal closure of meaning. They are dark an ominous at times, more playful and joyous at others. They frequently function to take the viewer somewhere strange and leave them there. They are weighty in feel and evocative of another, less fathomable place. This is a good thing as it ties in well with the paintings actual departure points.

They are base on a series of nocturnal paintings en plein air on full moons, at locations identified through a year long dream diary. The reference to past styles sits nicely with the impossibility of getting hold of something after the fact, be it dream or memory or in this case memory of dream. The ideas of the work are implied rather than explicit and the pictures take on their own set of values as any good painting should.

Most importantly there is a tacit sense of honesty and belief conveyed in the execution about them. For me that means they stand up enough on their own, and have their own voice, leaving their departure points significantly enough behind. Not to carry them like beasts of burden or handbag full of boulders. To use my own preferred phrase they are evolved rather than derived. Or to quote from Barthes ‘a difference only repeatable as a difference’. I look forward to the next body of work with anticipation.