The South Will Rise Again - a-n The Artists Information Company 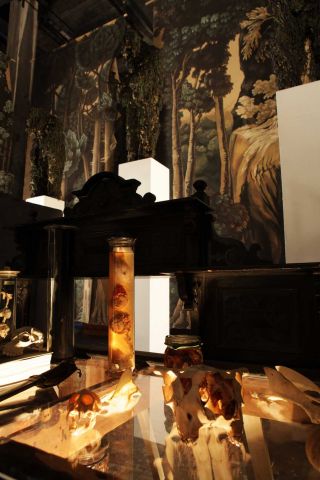 The South Will Rise Again – How did it all start

“So Juan-Pedro let’s take it from the beginning. Tell me, how did it all start?”

In his new show at RÃ¶da Sten, The South Will Rise Again, Juan-Pedro Fabra Guemberena presents an eclectic mix of collected, combined and installed artefacts. On an individual basis the objects and images are understandable and recognisable, but no single element stands alone. Rather, Guemberena has created a challenging exposition based around the connecting stands of his personal investigative practice.

Instead of launching full tilt into formal descriptive analysis of The South Will Rise Again, it seems much more interesting to initially sidestep the jars of formaldehyde and organic contents, military weapons, sound pieces and the theatrical visual elements, and begin with a personal encounter based on the smallest part of the viewing experience.

In a corner of the main installation Three Kings in the Cathedral Space of RÃ¶da Sten, stands a white plinth which rises to eye level. In a gallery context, the height of the plinth is somewhat awkward being taller than normal; and being unexpected, it attracts the attention of the viewer. On this plinth is some unknown shallow object, covered and hidden by a gentleman’s linen handkerchief. The viewer is confronted with a gallery etiquette dilemma.

To peek beneath the handkerchief, or to avoid touching the exhibit and move on?

For me, the impulse to sneak a look was too strong. With the attendant looking elsewhere, I lifted the little linen drape, and beneath it was a small, immaculate piece of porcelain, with a gilt edge. In the centre of this initially pretty and delicate object was a jet black swastika.

A small shiver ran down my spine. Not because the object itself was inherently evil or scary, but rather because it felt that I should not really be gazing intently, or be so fascinated by this little hidden piece. The saucer itself, and the viewer intervention required to see it, creates an air of unease and it is this slight sense of guilty involvement which is an overarching theme within The South Will Rise Again.

The swastika-adorned saucer, I later learned after admitting my ‘interference with the art’ to an attendant was called Hide Hitler; an apt and tongue-in-cheek title to describe not only the hidden nature of the piece, but also reflect the tension between enjoyment and repulsion at work in the exhibition.

It is the presentation of artefacts which are normally below the average individual’s radar, which is key to the provoking investigative nature of Guemberena’s practice. Although viewers can recognise and comprehend each individual object, one would be hard pushed to say that they enjoyed looking at any single piece. What does occur is that the collection as a whole functions to simultaneously repel and entice the viewer. To stand in the Three Kings installation, or to listen to the intense military chatter and shooting at Iraqi targets of P.M.C, a viewer has the feeling that they are unable to drag themselves away. The South Will Rise Again is an example of art-as-guilty-pleasure at it very best.

One moment a viewer is considering the destructive capabilities of a shoulder-mounted anti-tank gun which Guemberena has laid on a wooden desk. The power of this piece of military hardware is enticing, yet the associated possible carnage forces the viewer to turn away. The moment they do so, they are confronted with jars of formaldehyde containing complete and partial animal remains; again fascinating, but revolting at the same time.

Rather than distil the repulsion / fascination concept to create a overly aestheticised set of works, Guemberena instead showcases ‘investigative practice’ itself. It is this exposing of the lines of personal enquiry which increases the strength of involvement for viewers.

Even in the pieces which one could say were more formally finalised, Guemberena maintains a sense of limited mediation; merely pointing the viewer in the direction of the constructed contrasting elements and tensions which are at work, rather than guiding them on each step of the way. The presentation of the ‘below the radar’ subject matter, effectively functions to offers up launch points for a viewer. The artist himself describes the process as follows, in a conversation Edi Muka, curator of RÃ¶da Sten.

“One can see the entire installation as a digestive system – artistically speaking. It might become very pedagogical, which is something I hate, but I feel as though there is no other way to go for me. It is as if I have to teach myself to become an artist again, and to do this, the best way is to start from the origin of the process, and openly show how it works and what it in fact contains.”

The exhibition starts from a personal desire to explore an undercurrent of ideas and is coupled with darker and guilt-tinged themes. Guemberena’s work at RÃ¶da Sten is a demonstration of a darkly personal project by an artist at the top of his game. Exposing themes from just below the surface, fascinating and repulsing; The South Will Rise Again showcases an intense and intelligent range of ideas and is as interesting an example of a contemporary Hieronymus Bosch-esque Garden of Earthly Delights as a viewer is ever likely to experience.

Graham Lister [email protected] Artist, writer and part-time Tutor in the Historical and Critical Studies Department at The Glasgow School of Art. MFA (Gray's) MA (Art History - Glasgow) Current interests are focused around the notion of the contemporary 'everyday' and how this is explored and utilised in academic writing and in art production.