The Surgeon and the Photographer - a-n The Artists Information Company 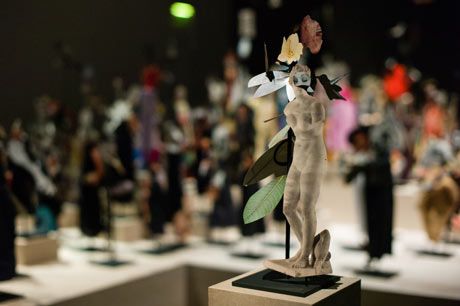 Geoffrey Farmer’s exhibition The Surgeon and the Photographer at the Barbican’s Curve is composed of three hundred and sixty five distinctly unique puppets, one made each day for a year. At once disconcerting and immensely vulnerable, they stand a foot tall and are fashioned from cloth and meticulously collaged photographic fragments cut from old books and magazines to form twisted and incomplete faces, limbs, horns and wings.

The puppets are propped on tiny poles and displayed on plinths, which raises them confrontationally to the eye-line of the viewer, an effect articulated by the masks, weaponry and placards many wear or carry. They are gathered in curious semi-tribal groups, with motifs drawn from the contexts of puppet theatre, art history and wider social history such as martini glasses, gas masks, ancient Egyptian artefacts, electrical plug sockets and gemstones which become theatrical props. The effective use of gesture and expression transforms the puppets from merely inanimate objects into characters with a more fluid identity, and the possibility of consciousness and action. Acknowledging this personification, the exhibition’s title on one hand names and assigns purpose to two of the puppets, whilst referencing Farmer’s own role in the editing and assembly of the work: the artist is both surgeon and photographer too.

As the viewer travels through the long darkened gallery, the motionless puppets appear as if in ritualised ceremony or pageant. The curious effect is compounded by the sheer mass of figures and use of shadows, underscoring the uncanny potential for animation inherent in dolls, mannequins and, indeed, puppets. The dense tableaux overlays complex contextual references to create subtle shifts in meaning and form, whilst the viewer’s changing line of sight gives the impression of movement, almost in a magic-lantern effect.

In his complex use of photomontage, Farmer’s works borrow from the Dadaist photo-collages of Hannah HÃ¶ch. However, his deliberate use of analogue production processes in this digital age is suggestive of a nostalgic embracing of cultural detritus rather than a critique. Farmer has investigated these notions in previous works such as The Last Two Million Years (2007) in which figures were cut from an encyclopaedia in a literal dissection of these canons of knowledge, history and time, framed from a contemporary perspective. From this standpoint, Farmer’s works recall William Kentridge’s Universal Archive prints in the way theatrical characters are assembled from the very pages of history. Farmer’s exhibition at the Barbican represents a real experience of time but also an exploration of the ways historical narrative is formed and shaped.

Toward the end of the exhibition, clusters of puppets are arranged to surround the viewer. This subtle change in display alters the exhibition’s tone. As the puppets assume their own gaze they become less like sculptures than quasi-living creatures that absorb the viewer’s projections. Farmer thereby constructs a physical interaction between puppet and viewer that is both playful and intimidating, and through his sophisticated manipulation of the viewer’s experience raises essential questions as to who is in fact the ‘real’ puppet.