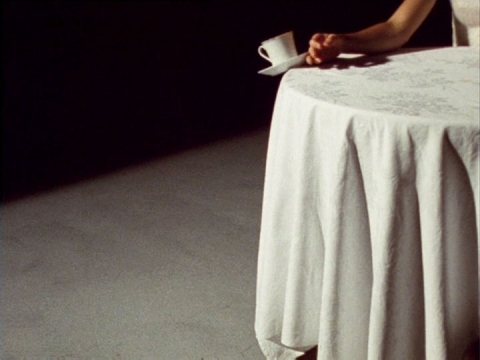 Presented at first with Goshka Macuga’s room: reflections and handrails alongside a mishmash of collaged artwork, I found myself more interested in watching others’ responses than responding myself. Looking at how their legs distorted in the reflective panels as they circulated the "artwork”.

I had heard about the second room: mannequins, conveyer belts, hair on the floor and empty bowls with traces of food left within. No matter what angle I stood at, which ever view I took, I just could not see why. Such randomness placed next to the ‘blurb’ on the wall did not have any connection. The only interest I found was that the conveyer belt was stationary yet, I could hear sounds of it moving. I traced that sound and found it was coming from Runa Islam’s piece. How ironic that I found the most interesting factor of Cathy Wilkes’ work was a competing artist’s own work in the next room.

Reaching the first of Runa Islam’s 3 video pieces I sat and watched “Be The First To see What You see As You see It 2004”. A gallery space, a tall china tea pot and tea set separated and placed on plinths. The conveyer belt sound whirring behind and above soothed me: as it repeated each creak with the emitted light. A lady prowls around the plinths, moving closer and closer until she is face to ‘face’ with the tea pot, her nose an inch away from it’s smooth body, yet she still holds a distance. It flicks to her with 2 bells; picking them up she respectfully tinkles them. The next scene she is toying with the lid of the pot, moving it agitatedly as if to test how far she can push it without causing harm. The sound is compelling of china against china; the clinking sound of impending destruction’s beginning. Second by second she becomes more restless relishing in the joy of bringing the fragile objects to the edge of the plinth until finally the first item drops. Then the next. Then the bell; without even looking at it she tinkles it and lets it slip. The camera pans down to the smashing objects yet she dismisses it and doesn’t look, almost as if it is the sound that she is craving.

Flashbacks to her pouring and drinking the tea from this tea set, dipping a pink wafer into it and then inserting it into her lipsticked mouth. The kitsch aspect reminded me of my grandmother’s teacup, accidentally knocked to the floor, rendering the set incomplete.

I watched it three times just to hear the sounds, yearning to hear and feel the tension as each item neared the edge, lining up to shatter upon the floor. This action that as a ‘civilised society’ we refrain from, became addictively compelling.

I could not help but attach what I was experiencing to what had just come before. This representation of my feelings towards art, to Cathy Wilkes’ piece: I looked closer and closer, and more than wanting to respect it and leave it be, I wanted to turn on those conveyer belts as they it pushed it all over the edge. Oh what a sound those horse shoes would make as they clinked to the floor!

Mark Leckey’s work was interesting; a 40 minute presentation on what objects he felt held weight. His ideas were humorous and intriguing yet how could he believe that his artwork deserved us being subjected to his opinions? It neared to an evening at the pub listening to someone enlightening his friends to obscure ideas he thinks we should appreciate more in the world: lemons, shoes, and meat and potatoes, except he had a microphone and video clips to support his point.

Once again, I wonder about the Turner Prize as so many do. Is it not supposed to be about innovative work that has been the most inspiring over the past year? There is something wrong here when the most exciting parts are the voyeuristic compulsion of Macuga’s reflections; the idea of Wilkes’ work animated and crashing to the floor; the sound of a film reel turning; and a random presentation on the weightiness of objects that should be left to drunken chats on a Friday night.

Is this really all Britain has to offer?

Interface is working with Tate Britian to generate debate around the Turner Prize 2008. You can read this review and others on Tate’s Turner Prize debate website http://blog.tate.org.uk/turnerprize2008/ 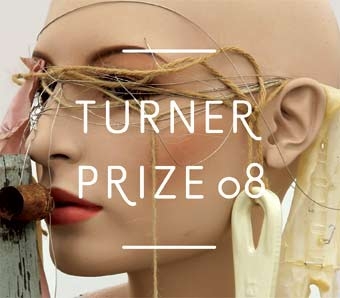