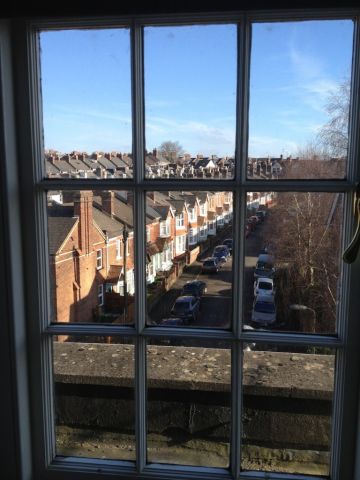 Who doesn’t like to peek in other people’s windows to see how they live? This intriguing video and audio installation, produced by Devon-based art collective Blind Ditch, turns the tables and allows gallery visitors to look not in but out of windows across an entire city.

This City’s Centre 1: Window gives a multi-faceted picture of Exeter, a small urban settlement in a largely rural area of Southwest England. Forty anonymous residents talk about their city while a camera focuses on the views from their windows. Although we never see the speakers, we catch little glimpses of their lives: the fruit bowl on the table, the ornaments on the sill, the Union Flag flying.

There’s a parallel suggested between the physical viewpoints we’re seeing and the points of view we’re hearing. This city’s centre – its heart, its character – isn’t a single thing; it can’t be located as a point on a map or defined in a few short sentences. Instead it’s distributed across its citizens. And it’s a fluid thing, constantly shifting and changing over minutes as well as years. This is underlined by the chorus of overlaid voices and montage of views that punctuate the narrative as we leave one home and enter another.

This City’s Centre 1: Window claims to “gently probe the boundaries of public and private”. By inviting us inside people’s homes, it promises intimacy, yet remains largely outward-looking. The whole piece exploits this tension, comparing and contrasting the literal and figurative spaces of real city, filmed city and narrated city. Time and again, the camera pulls back from a distant, shared, public vista to reveal that it’s situated behind a window – behind glass – in a private home.

This focus on space makes the organisation of the exhibition seem particularly significant. Shown in Exeter’s main museum as two adjacent cinema-sized projections high above our heads, This City’s Centre 1: Window elevates the domestic to the grand. Yet the voices we’re hearing are inside our heads, as the soundtrack is delivered on headphones. There are only two sets and they’re wired in, pinning you to the spot. The sound seems somehow detached from the action; many visitors put on the headphones and listen without ever noticing the screen.

The participants’ words are presented as monologues (although they must have begun as conversations with the film-makers). As they look out over the city, they seem conscious that they’re addressing an audience. Facing a stranger with recording equipment in their homes, many of these Exeter citizens respond politely, with positive thoughts about their lives and statements of civic pride.

It’s almost as if participants are colluding in an idealised picture of their community. The artists have chosen to elicit these views from places of retreat, invisibility, separateness and ‘safe’ distance. It’s very different to be a citizen out on the street, immersed in the conflict and communality that results from contact with others.

What’s more, the very premise of looking out of a window implies a certain kind of lifestyle – a home you can call your own, and the time, resources and confidence to share it. Many of the speakers make light-hearted references to voyeurism and how the windows are used to observe oblivious passers-by. The arguing couples, the drinkers in the park and the noisy inmates of the prison are just so much local colour. Even though compassionately viewed, they don’t get to look back. As I watch, it’s the views we’re not seeing and hearing that preoccupy me most.

Ultimately, however, This City’s Centre 1: Window is a portrait not of people, but of scenery and buildings. A view can belong to you, even if the land itself doesn’t, and that’s possibly why many participants talk with such pride and interest about what they can see from their homes. At one level this is a nicely packaged gift to Exeter, from Exeter, with a little municipal self-promotion attached. But, as the work itself reminds us, there is always more than one way of looking at a city and your own place in it.

This City’s Centre 1: Window is the first part of a digital triptych of Exeter, which will be completed by Linger, an interactive mapped walk of Exeter views, and Here, Now, a live performance with streamed video showing 17 – 21 September as part of Unexpected 2013, Exeter’s new arts festival.