This is Not a Performance or a Lecture! - a-n The Artists Information Company 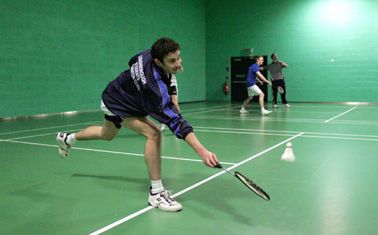 This is Not a Performance or a Lecture! A day of performance lectures in Loughborough University’s lecture theatres and sports courts. I roam around the campus, disregarding the map that I can’t make sense of. It feels so hyper-typical of an academic setting: even the grey corridors and concrete exteriors appear vivid, alongside the stunning sports facilities. The outdoors has an indoor quality (aside from the rain); disconnected from the outside world. A timetable is provided, and the day is spent filing in and out of lecture theatres. We are instructed to remove our shoes before entering the sports courts. Painful sensation returns to my foot that has fallen asleep.

My notes contain intriguing phrases that I struggle to put into context. Notes of what I heard; not necessarily what was spoken.

From Jennet Thomas’ Echo Vs Gown:

What was the cause of the falling?

The body was over-full and top-heavy.

The body had no clear goal-based strategy

He spoke in a high-pitched voice: not as deep as a normal adult male

4 performers dressed as Navy sailors pose at the front of the dim theatrically lit lecture theatre. Each reads aloud from Milton Friedman’s Capitalism and Freedom:

The stability and efficiency of the manual system is a global public good.

Imagining the more theatrical and bizarre moments in a conventional lecture.

They stand in a line and perform bold synchronised gestures with their arms and bodies to a significant (or perhaps meaningless) word. Eyes show conflict as they dart between looking upwards towards the book and out at the audience.

The stack of crash mats to lounge on in the Athletics centre provide excitement and comfort, whilst watching Ruth Proctor’s Repeat, Rehearse, Replay: A Conversation.

One of Team Triangle turns to the Thrower’s Circle

Hang on! Wasn’t that leg over there before? It’s moved; it’s slipped.

A voice informs and instructs the abstract movements of the performers, creating a narrative. Her voice lacks inflections of a trained narrator, sounding shy. Like hearing back an embarrassing recording of ones own voice. The performer is instructed to turn over the record and the piece begins again. Mistakes and stutters remain.

We enter an amazingly green indoor badminton court for Robin Deacon’s The Argument Against the Body. Why is it so green? This makes the shuttlecock more visible.

The performance begins and a voice echoes around the room. Or rather a projected voice from a set of visible speakers. Subtitles are visible on a screen. A lecture in a sports court. It moves into anecdote territory whilst continuing to sound formal and analytical. I can tell that I’ve woken up early. And I never want to look at the clock in these situations as this makes it virtually impossible to get back to sleep. He goes on to talk about the difficulties of going to the toilet whilst half asleep. Displacement of the body; displacement of the lecture.

Part 2: Ventriloquism for One (A Voice With a Disconnected Mouth)

Lip synching out of synch. A planned delayed reaction.

When the puppet says something that the ventriloquist doesn’t expect, something of an uncanny aftertaste remains.

Reduced to acting out the act of thinking.

Bewildered at best; confused at worst.

The sports facilities and notion of performance inspire an engaging physical quality to lectures. Voice and body are a theme: something often overlooked and taken for granted.

The ability to undermine oneself: Please note that the subsequent monologue will last approximately 7 minutes. On-screen whilst artist performs. 5 and a half minutes remaining. Is planned undermining passively defensive?

A section of endurance; a physical challenge. Deacon sprints laps round the court, then surrenders to the floor, whilst an athletics coach inelegantly flips him over backwards in the video.

An interview with a sports science student:

But fatigue is inevitable? 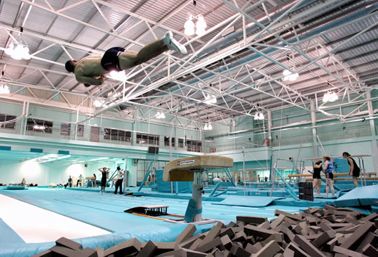