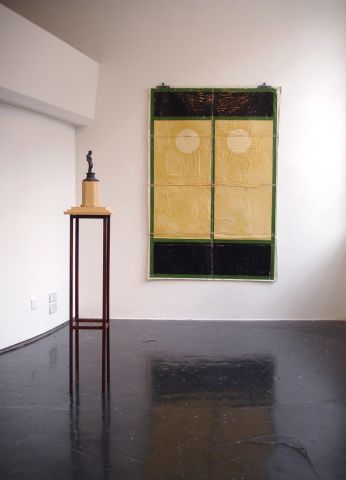 The new work presented in Tim Ellis’s solo show The Touristat Spacex, Exeter prompts narrative responses from the visitor. Ellis distributes the work across three spaces each of which has a different character. Room 1 is a display space, while in Room 2, there is a more intimate or domestic quality, and Room 3, feels like a seaside promenade. The colours vary also, with the items in Room 2 being more brightly coloured, and with a variety of materials across the rooms that include fabric, metals, wood and glass. There are different surface treatments as found objects are painted and patinated, are rubbed down and worked over. Ellis’s works are funny, with elements of beauty; they are complex and inspire curiosity in the viewer, multiplying layers of possible meaning without arriving at any final story.

Unfolding in three acts, the exhibition’s first Room offers us a guide in the shape of ‘The Tourist’, a cast brass figure of a day-labourer, dressed not in leisurewear but in a long apron and boots. The figure stands open-mouthed, leaning back a little, his weight on his heels and calves. Placed here on a complex plinth, a little below my eye-level, he stands in miniature, but monumentalised. Heavy-shouldered and wearing a soft cap, he might have stepped from a nineteenth-century realist painting. Perhaps he represents one of those market workers who laboured in the Paris area of Les Halles before it made way for the Pompidou Centre. Displaced by a tourist attraction and cultural institution he reappears here as our guide. Will he tell us what’s going on? Can we rely on him? Standing in for the artist, he doesn’t have to tell us anything; we can each work out our own story.

The works in Room 2, the most domestic of the spaces, suggest the accoutrements of an Edwardian bachelor’s parlour, initially reminding us of a pipe rack, billiard cues and library. The recognisable, if not familiar, objects have been modified and extraneous elements added. In ‘Growing Old Together’ eight wands or walking poles, topped with meerschaum heads, are gathered in an umbrella stand, their varied features offering a set of characters to play out some game, to prompt storytelling. One has an artist’s hat, another a peaked cap like a telegraph operator, one has the hooked nose of Punch, another wears a fez; they appear as types, characters for a game whose rules are not provided, a cast in search of a play.

On the wall hang three kitchen implements, ‘Towards a Common Understanding’, each marked with an emblem echoing playing cards or regimental stripes. These reflect other ordering systems, other taxonomies. A collection may operate by an explicit rule of potential completion, as the collector strives to find all examples of a particular object. Or, a collection may have an implicit rule where the viewer intuits that objects are linked by some quality, by colour, by provenance, or by an association that is clear only to the collector. Ellis’s assemblages suggest organisational systems, but the elements are unstable as they shift in and out of belonging, as their roles change from move to move.

The copper patens of ‘Towards a Common Understanding’ each hang from a forged iron nail, specifically mentioned in the list of materials. A nail forged by a figure like ‘The Tourist’, offering evidence of the labour involved in making a tiny and potentially insignificant element of the show. This draws attention to the artist’s work of making, and to the other mode of hanging used, the bulldog clips that hold the ‘Backdrop’ paintings in Room 3. These incidentals take on significance, becoming clues in the wider game of the exhibition, linking to a pair of bulldog bookends in Room 2 by a brand name that has become genericised .

A set of flimsy grass and bamboo bookshelves is titled ‘Founding Fathers’. Each of its five shelves sports a trophy pair of bookends, on one, twin bulldogs, on another, little gun carriages and cannons. ‘Saucy Jane’, a tri-master, sits doubled propping absent books, while below her, dark abbots stand paired and shelved available for duty, framing a gap between them. Two eagle heads escaped from or overlooked by Marcel Broodthaers’ Musee des Aigles occupy the top shelf, no longer on speaking terms, they face left and right, ghost volumes behind them.

‘Through Authority We Serve’ presents six columnar items resting on a pipe rack placed on a small side table. Each has a round stamp or signet symbol on their visible end, suggesting another set of tokens or character marks, like counters in a board game, or indicators of attribute and status in role-playing games such as World of Warcraft. The title may refer to an imperial or hierarchical structure, with the symbols echoing the pyramid on US printed currency, or the Pentagon, or Freemasonry. Ellis’s titles add a layer of suggestion, propositional rather than definitive, they can feel cut from a longer text, or distorted through mishearing.

In Room 3 are three large banner-like works titled ‘Backdrop: To Live Long and Maybe One Day Forever’. We may recognise the material of these paintings as duvet covers, king size they are large squares of doubled fabric, with the poppers for the opening evident along their top edge. These utilitarian fabrics have been worked over to transform them into densely weighted drapes, their surfaces thickened and slicked to sheen dully in sky blue, marine blue, or grass green. In flat colours, sharply edged, the central compositions are framed in biscuit or taupe with two cream roundels at their lower edges. These tarpaulins have been rolled in and unfurled, opened for another performance, a sideshow, a seaside show. They propose a Punch-and-Judy or bearded-lady world of funfair and holiday, unpopulated or open to peopling by the figures in the room before them.

These eight figures, loosely grouped in their tableau, stand square on to us as we enter their space. The tallest, ‘Lectern’ is about my height at 177cm, the smaller ones about as tall as five-year olds. They have the air of personages, facing us, listening to us, sounding at us, or giving the impression of these activities while in fact being unseeing, mute or unhearing. And are they gendered? This one, ‘Interloper’, in pale blue and ivory, with a glass head and tapered to narrow feet is female? ‘Lectern’, the tallest, in shades of green, with doubled large enamelled lightshade ‘face’ and doorknob features is male, isn’t he? And that must be his little daughter with him, ‘Willing Servant’ in a floor length skirt?

The titles make this attribution of gender less easy, tricky to simply designate the young girl a ‘willing servant’ as it suggests more complex domestic dramas than the uncomplicated colours of the tourist fantasy encourage. The sculptures also suggest pieces in a board game, chess or Cluedo or some variant of this, with their uprightness, and their round heads. This one here, ‘The Arrival’ might be the king or queen, as that’s a crown on top, or at least a teapot lid crowning it. And who is she, ‘Well-wisher’, in the ornate choker? The titles can define the characters as functions in a drama, with attributes or tasks within some action that will be played out here, in some story to be played out by our moving them, our re-imagining their provisional relationships.

Tim Ellis’s exhibition The Tourist puts in play a drama of emotional labour as the visitors, tourists here also like the artist, consume the signifying and meaningful objects and installations. Experiences and sensations are proffered which can be enjoyed or absorbed while in the same moment and stories or rationales are generated for them. The Tourist offers the visitor an engagement in aesthetic labour and narrative play, taking on both the role of the worker and of leisured participant.