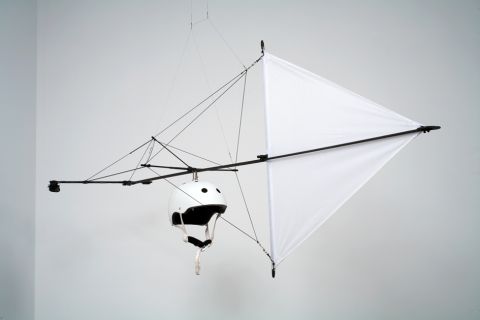 Go walking in the city at 2.00am with only a weather vane as your guide. A weather vane fixed to a helmet on your head, mind, just to make sure you look really odd. The suite of films that make up Windwalk #2 – Seven Walks from Seven Dials looks over the shoulder of Tim Knowles as he makes these eccentric night-time expeditions into the West End of London.

Following the direction of the wind around the empty streets for an hour at a time, he’s blown about like a piece of litter. Sometimes you’ll see him hovering by a storefront in a random bout of window shopping, at other times he’s whirled along by the draught of a passing truck.

Using GPS readings combined with meticulous study of the footage, Knowles later traced out each journey in detail, compiling them into a single drawing. The result is seven routes leading from a central point. Some are purposeful, reaching out across the city, but more often they circle obsessively over the same piece of ground, as if carrying out a search.

This process has changed the normal rhythm and flow of human walking into something more repetitive and insect-like. Within the huge blank of the paper, each wind-driven movement defines more of the space, like flies circling a light or bumping into the windows of a room…until you can see the width of Shaftesbury Avenue, the scribbly shapes of dead-end alleys, even the contours of some architectural features.

By contrast, in another video piece Windwalk #3 – North Dartmoor, Knowles allows himself to be blown across an open landscape for several days and nights, while strapped into a five-metre harness that is part kite, part camera rig. So the viewer follows him following the wind, walking uphill and downhill, crossing boggy streams and clambering gingerly over granite walls. He says he feels like an avatar in a computer game when he allows himself to be directed in this way – setting out on an adventure controlled by some invisible power.

In the past, Tim Knowles has been a hands-off artist, setting in motion unpredictable mark-making processes. He’s allowed everything from helium balloons and trees to postal packages and cars to draw their own movements: "making the invisible visible" as he puts it. There’s much to be said for John Cage’s view that the world is more fascinating when we let it be itself. Yet by placing himself in the experiment (while still surrendering control) Knowles has made a leap from the cerebral to the embodied enquiry – he’s added human interest.

This fascinating exhibition presents a thorough insight into Knowles’ current practice, from the elegantly engineered contraptions he uses to guide his walks, to the films, photographs and drawings that document the results. Artists can detract from their work by exposing their methods, but that’s not the case here. The process and the apparatus isn’t a means to an end, it’s the heart of the show.

Knowles clearly relishes the role of mad scientist, but there’s an unsettling core to his work. While borrowing from Debord’s dérive (or drifting) in his playful disruption of normal walking habits, he also invokes the sublime when he pits himself against the wilderness of Dartmoor or walks treacherous paths in the pitch dark. Wanderlust seems to point to the absurd human delusion of control when faced with the forces of nature.

Tim Knowles will also be curating a late-night series of artists’ films at Tinside Lido, Plymouth on 17, 18 and 19 July and showing a new public artwork Wind Barbs 24 August – 1 September at Plymouth Hoe. www.plymouthartscentre.org