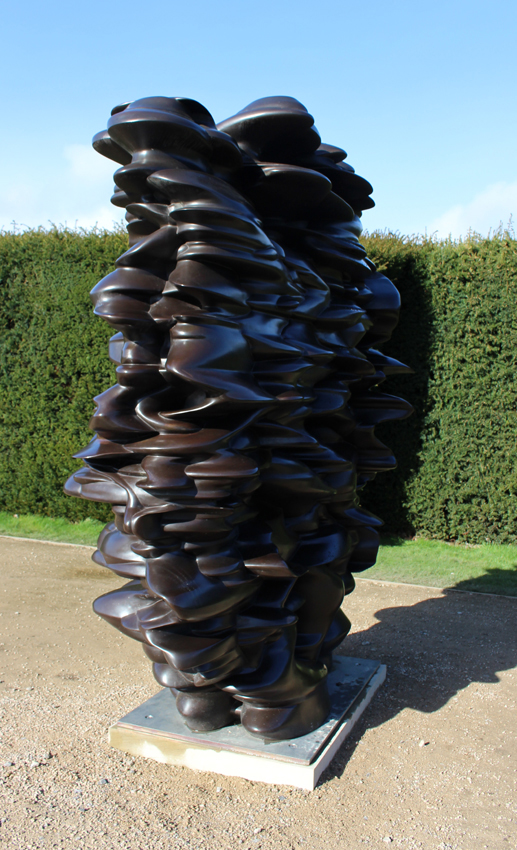 As an artist, two key things turned me onto sculpture. Firstly a conversation with Maurice Blik at Middlesex Poly, who suggested my painting had sculptural potential. Secondly a visit to ‘The sculpture show’ at the Hayward and Serpentine in 1983. One led me through the door, the other blew it off its hinges. This mega survey of the shift of British sculpture into the ‘expansive field’ introduced me to Kapoor, Gormley, Deacon, Blacker, Houshiary , Opie and Cragg amongst a field of 50 sculptors.

Already back then, Cragg was clearly worth watching. With his conical towers made of stacked rusty found industrial objects and delightful depictions of riot police made from coloured plastic, I was quickly hooked. He took the utilitarian appropriation of Duchamp and turned it into playful form. It was a master class demonstrating that sculpture amongst many other things, was our world re-configured, a transformation of chaos into order and order into chaos. Stuff orchestrated in a ‘jouissance’ of the object world.

A number of years later at Lisson gallery, I observed  the evolution from an artist who put stuff together, into one creating seemingly familiar, yet peculiarly strange amorphous blobby forms from scratch. I was totally blown away by his dice clad sculptures. They spoke with  visual eloquence, of the insignificance of our existence in the wider universe. He achieved this not by depiction, but by association and evocation. And that is what he does so well. His work persistently alludes to meaning, but never spells out. It occupies and navigates a shifting territory in the wider world. It generates joyful intrigue by encapsulating metamorphic hybrids of biological and industrial presence in bewitching forms.

Accepting this resistance to closure, it is at times impossible not to anthropomorphically project onto his work. On the terrace of the formal garden below the underground gallery, a black mass of oscillating discs reminds me of a Giacometti walking man, (this time arm in arm with his wife). A number of segmented fossil like forms are strongly suggestive of Epstein’s ‘Rock Drill’. One of several glistening chrome forms takes me to the wobbling humanistic landscapes of Dali. And this is one of the many aspects the YSP show brings to Cragg. Set twixt a multitude of twentieth century greats, it allows you to appraise Cragg within the evolutionary continuum. A lineage within which he poetically flows.

This show is a must for any addict of form. As an artist who aligns himself within the sculptural paradigm it is both breath taking and somewhat overwhelming. Afterwards I gave myself a managed comedown, with the delightfully absurd object trees of Dennis Oppenheim, the orange juice of the morning after. Go and enjoy, but be aware this work, which knows how to seriously monkey around with the syntax of form, is as heady and intoxicating as it gets.