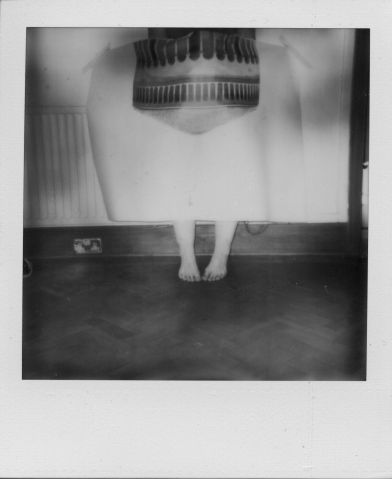 Topophobia brings together a collection of artistic responses to the fear of and the fear for space and place. The exhibition more minutely connects these broad ideas to loss, anxiety, suspense, dislocation, nostalgia and humour, psychological reactions which are more complex and subtle than fear alone. The human condition is explored through varying approaches to and perspectives on space and place by ten artists in this exhibition curated by Anne Eggebert and Polly Gould.

Topophobia at the Bluecoat is navigated via a series of interconnecting spaces which branch out from a corridor. This corridor is the site of Panoply (2012), a new commission by Emily Speed for this middle leg the exhibition’s three-stage tour. The work is a vaguely parasitic construction reminiscent of a bird box scaled up to human size, jammed between a window and mezzanine level of the building. Occupying a supposedly defunct space high above the main passageway, the work is nevertheless physically and conceptually located at the very heart of the exhibition, as the visitor returns repeatedly to this work and its themes throughout their visit. One is afforded a particularly clear view of Panoply from the top of the first floor staircase, where David Ferrando Giraut’s startling video work is shown, building an interesting dialogue about claustrophobia and the dislocation of time between the two works. Crucially, rather than simply a static sculptural intervention, Panoply is a space for the artist’s performance. At various points throughout the duration of the exhibition Speed ‘inhabits’ her seemingly make-shift shelter and tantalises the viewer with playfully fragmented glimpses of her body, as an arm, a skein of hair or pair of legs is carefully pushed through small holes in the structure, in a reassessment of the use of the gallery spaces and the structures within them: “not object but dwelling.”¹ Whilst many of the works in the exhibition address ideas of distant places (polar regions, American wilderness, imagined or lost places) her work is a space rooted in this particular place, albeit inaccessible to all but Speed herself. Both prison and safe haven, this is a moving, challenging and compelling work which sets the tone for the exhibition.

The Bluecoat gallery spaces are uneasily permeated by sounds that spill out from works including that of Louise K. Wilson. This video piece features a layered soundtrack of rumbles, little gasps, screams, dog barks and chiming bells that connect with the viewer on a visceral level and induce a low-level anxiety. The effective and cinematic use of sound to build suspense is comparable to, “invisible radiation, capable of crossing bodily limits, bringing with it the cold, creeping fear that the ‘out there’ can come ‘in here,’” ² as it interrupts one’s own private psychological space. However, these invasive sounds literally overlay the viewer’s experience of other works in close proximation, such as Abigail Reynolds’ fragile paper assemblages. This lack of containment can at times be detracting.

Many of the works in Topophobia display a sense of ambiguity where context, meaning or narrative is partially hidden and may only be revealed through the scrutiny of the viewer. Key examples include Speed’s Star Fort (2012), a collapsible wooden structure taking influence from furniture originally shown as part of a performance in the exhibition’s originating venue, Danielle Arnaud Gallery. The mystery of this work unravels in light of photographic documentation where the presence of the artist’s body reveals a type of wearable defensive fortress. Anne Eggebert’s series of drawings and watercolours share these initially ambiguous qualities, acquiring a sense of poignancy once one learns that the seemingly unremarkable places depicted relate to traces of the artist’s late father and the spaces he once occupied. The viewer therefore makes aesthetic and conceptual connections between reference points to build narrative, an idea which is neatly explored in Leslie Forbes’ short story for the exhibition catalogue Lost in the A-Z.

The dislocated relations between time and place are investigated by several artists in the exhibition. Louise K. Wilson’s film, Everything begins and ends at exactly the right time and place (signal/noise cut) (2012) appropriates film footage from Picnic at Hanging Rock (1975) based on Joan Lindsay’s novel of the same title. The story follows a group of school girls who mysteriously go missing during a day trip, supposedly ‘victims’ of the rock. What is already an ambiguous and somewhat sinister sequence of images is heightened by Wilson’s editing process, speeding up the film to produce looped images which race before the viewer’s eyes, returning to normal speed as the characters explore the curious Hanging Rock site. Her work is frequently concerned by lost traces of place, although perhaps it is not the place that presents the ‘threat’ in her film, but the disquieting teenage girls in their virginal Edwardian dresses. Conversely, David Ferrando Giraut’s film Road Movie Perpetuum Mobile (2008) is not so much a sequence of events, but a single event stuck in an uncanny never-ending cycle. As the camera continuously pans around the disturbing aftermath of a car crash, a stretching of time and space occurs which traps both viewer and protagonist in a constant revisiting of the scene, in much the same way as one’s memory may persistently replay traumatic images. Caterina Albano succinctly describes this uncanny effect in her catalogue text as, “present, future and memory [that] are interlocked in an endless turning movement.” ³ The time/place relationship is also investigated via Abigail Reynolds’ precarious three-dimensional collages, using cuts, folds and layers of photographs taken from second hand books. In Chrysanthemum Field (2011), she forms new meaning between photographs of the same geographical location taken over fifty years apart, superimposing the images as if the place had somehow been the site of a rupture in time and space. Reynolds’ works foreground the ever shifting nature of place and the nostalgia or poignancy that is often associated with places from time past.

Fragility, loss and impermanence are key notions considered by several artists in the exhibition in relation to place. This can be seen in terms of media, form and concept through Polly Gould’s anamorphic landscapes reflected on to hand-blown glass globes and Reynolds’ delicate paper assemblages. The viewer is also encouraged to consider personal emotional connections to place and space, through Eggebert’s works which explore the loss of a person, or Speed’s melancholic, child-like hiding space, whereas Giraut’s and Wilson’s video works describe an imagined loss through narrative gaps and unanswered questions.

An appropriate summary of Topophobia might be found in the following description of Speed’s work: “[Her] sensibility explores a spatial anxiety… and offers our own fears back to us, re-packaged, amplified and slightly unhinged.” 4 The same could be said for many of the works in the exhibition. In the inexorable search for the full picture, one unconsciously overlays one’s own emotional and aesthetic conditions on to the works, reading between the lines and connecting the dots. These very human responses to space and place most directly connect with the exhibition visitor, and are far more subtle and complicated than the title might at first suggest. The patient and observant viewer is rewarded with an exhibition which unfolds before one’s eyes, a terrain which is constantly shifting, both revealing and occluding meaning and narrative.