Turner and the Elements - a-n The Artists Information Company 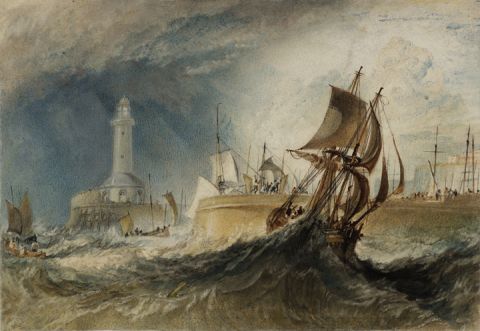 Turner spent a lot of time in Margate, and this delightful show opens with a selection of local watercolours. Ramsgate from: The Ports of England is a small and finely detailed watercolour with ships, buildings and wave crests all carefully delineated. You can almost feel the weight of the water threatening to engulf the ship beyond the harbour wall. Margate, on the other hand, is a simple, almost minimal study in light washes with a few delicate clouds and a suggestion of sunlight on the horizon: no substance, just light and air. These works set out the range of what is to come.

The show is divided into two large galleries. One is devoted to the four traditional elements of earth, water, air and fire, while the other is entitled Fusion: a catch-all for a variety of works, mostly from later in Turner’s career. The elemental distinctions seem slightly artificial, especially when many of the works seem more concerned with colour and light than anything more substantial. But separating the works in this way does highlight one quality: Turner seems to have less affinity for earth than the other elements.

Some of the mountain landscapes certainly have grandeur, especially Yr Aran and Yr Wyddfa, a large watercolour of a Welsh mountain range, and Morning amongst Coniston Fells. But these seem heavy compared to Blair Atholl. Here, dark cloud and hillsides obscured by rain or mist give this work an atmosphere the others lack.

If Turner seems more at home with the lighter elements, he also seems awkward when dealing with the human figure. In Entrance of the Meuse, rather stiff, awkwardly drawn figures occupy pitching skiffs in the foreground and seem oddly unaffected by the turbulent sea, which is almost sculptural in its deeply scooped waves. In a later oil, Whalers, the seamen look almost model-like, oddly static amongst the energetic handling of the sea and sky around them. Figures in a Storm, an almost entirely blue watercolour study, serves to underline the point: the figures are more believable for being merely blocked in.

Most of the works here are watercolours, and there are some lovely examples of Turner’s handling of the medium. Stormy Sea, a postcard-sized work on blue paper, has vague suggestions of boats and shoreline below an intensely dark sky. Also on coloured paper is a lovely cloud study dominated by an ultramarine cloud bank, heightened with splashes of red. There are a number of cloud studies here, and the inevitable comparison is with Constable. His studies can seem like investigations of the structure of familiar cloud formations, but Turner’s seem more like excuses to experiment with colour and wash effects.

Another example of this is The Burning of the Houses of Parliament. Turner was there to see it in 1834, and must have had to work quickly. The work is almost a study just in using thin layers of red, blue and black, and detail of the buildings is largely absent.

All this watercolour work is very enjoyable, but the highlights come in the final room. There are seven large oil paintings here, two of which stand out. Snow Storm – Steam-Boat off a Harbour’s Mouth is a vortex of high waves, cloud and smoke, the boat’s distress rocket an explosion of thick white paint at the centre of swirling forces. If this is Turner maximal, Turner minimal is seen in Sunrise with a boat between headlands. A soft glowing light seems to emanate from the painting. Even with the gentle impasto of glittering sunlight, this oil is more like a watercolour study with its washes of colour, lightly-sketched headlands and the boat all but invisible.

With so many riches on display, this is a marvellous show. Almost all the works here are loaned from the Tate, but many were new to me and it’s well worth making the journey to see them. It’s an exhilarating demonstration of Turner’s range, curiosity and invention.