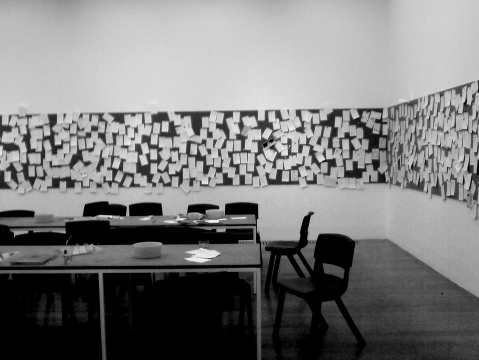 I'm coming into the Turner Prize debate a little late. Probably all's been said now, prize given, done and dusted. I have a good-ish excuse though – while the prize was being dished out to Mark Leckey I was in Lodz, Poland enjoying the Camerimage festival of Cinematography.

Why is this significant? I wanted to review the prize principally because I am interested in the place that the moving image has in contemporary art, and I knew that moving image work was a significant part of this year's show. I hoped that seeing the work in the context of “the Turner Prize” might give me some insights into the issue of film as art.

And so to the art. I had a guidebook and a headset, but I didn't use them until I had experienced each work in full.

1. Goshka Macuga – “The rubbish written about the art/ists is much worse.” M Turner ( visitor comment.)

Macuga's work is conceptual in a way that I have no capability of appreciating. I was initially intrigued by the beautiful glass spiral piece, and I was prepared simply to appreciate it as an aesthetically-pleasing object. I loved the way that it bound together so many slices of glass, that cold and fragile substance, into a delicate seashell like coil, giving it weight and solidity. Later, the headset guide indicates to me that the glass spiral is actually a re-rendering of an artwork made or designed by another artist. I feel let down, ripped off. I remember when I first went to the Tate and saw Duchamp's Large Glass and was struck down in astonishment that, my God, there IT was… only to discover it was Richard Hamilton's faithful re-rendering.

The rest of the work leaves me cold and I don't have a clue what it is, or meant to be. The verbiage about it pours forth from headset and booklet, none of it interesting or enlightening. In any case, why should I need words to explain visual art to me?

I can see why her work is so appealing to the museums and institutions that favour her, because while her work is apparently all about looking at “the role of the museum as the producer of meaning”1 I don't feel any kind of critical distance, or discourse, or questioning – rather, a cosy relationship between artist and institutionalism that is eternally self-referential.

2. Cathy Wilkes – “an image of an over-done idea” (visitor comment)

I remember when I first discovered the feminist artists and writers of the 1960s and 1970s, like Judy Chicago and Sheila Rowbotham. I was really intrigued by their critique of gender relations and women's labour. I very much wanted to like Cathy Wilkes' work because I felt that she, unlike many contemporary female artists, really wants to address these kind of issues. Wilkes describes “trying to feel what someone else feels and be a companion to them in their suffering.”2 When I first heard that statement, in the gallery, I found it offensively trite and pretentious. You what? Later, relistening to it on the Tate website, I find her speech moving and inspiring. However in the work itself, I found more cliché than symbolism. But assemblage is difficult, probably the most difficult of all art-making methods. Something was dead. I didn't feel anything, I merely went through a process of recognition of objects and their meaning, which seemed very obvious. And yet, Wilkes' words continue to haunt me.

While Runa Islam, as a film maker, is the one most entitled to use words in her work, she is the only one who is silent. I won't lie: I went into this expecting some kind of structuralist minimalist drear that often occurs when “artists work with film.” But it wasn't like that at all. Islam draws the viewer in through the images, a gaze which is alternately subjective and objective. The narrative is there, everything is said, without words, but in the language of light, movement, gesture.

The protagonist in “Be The First To see What You see As You see It,” is a perfect English rose, first admiring, then delicately using, fine English china. Slowly and gently, her hesitant caressing of the crockery becomes more assertive, yet always remains gentle, until the cups, saucers and finally the teapot, come crashing down. Islam's film perpetrates a sly subversion of so many sacred cows: perfect womanhood. Englishness, the sacral space of the museum (the china is at one point positioned on plinths), female rage…

“First Day of Spring” is similarly loaded with meaning, in particular the dichotomies that are simultaneously present in the frame: the lassitude of the rickshaw drivers and the busyness of the distant main road to which they'll return; the premodern look of the rickshaw carts, bereft of the logos that dominate the urban landscape. The durational nature of film allows the viewer to languorously unpack and unskein the elements while remaining absorbed in the film's world.

“Cinematography” wasted my time and Runa Islam's, and I was left with the impression that its point was to sneer at the “rules” of cinematography. The previous films prove that she can use a camera, so what is the point of waving the camera around like a drunk, swinging it to and fro, leaving the viewer sickened? This work slammed me right back into the middle of the dilemma I started out with: how do contemporary art and contemporary cinema intersect? Do they, even? I fear the abyss between the two is too wide. And yet I can't help but feel that Runa Islam has the means to be a really good film-maker. I suspect the she has a lot of fascinating things to say and I'd like to hear them. Maybe if she gave up working “within a broad range of media.”3

So, “self-conscious looking at the moon” is right, but it's not a final sentence. Next time I'd like to see her screen at the London Film Festival. Hey, Steve McQueen did it and we're all the better off for it.

Mark Leckey – “I loved Mark's choice of bottom, she has a great peachy arse” (visitor comment)

I enter the Markspace. I'm already put off by the cheesy redhead with the fishnets and arsecheeks. The stuff in the antechamber is risible. The lecture room looks comfy and there's a lemon on the screen. This lasts for ages. I am mildly amused, and ponder, hasn't banality already been “done?” Mark pops up on screen, draped in clairol-blond locks and I don't see his face. He begins to speak. Man, that boy can talk; I'm sure he's a popular lecturer at the art school where he teaches.4 It sounds great and it washes over me like fizzy water, tingly and leaving no trace. Words, lovely, empty, funny words. I'm starting to hope Mark gets a guest spot on The Mighty Boosh. Then I get irritated however when he shuts up and shows me clips of other people's films, and is ill-equipped to discuss them. There are grammar mistakes in his titles. It all goes on too long. Then the lemon again, yet now I find it's not even Mark's lemon, it's Hollis Frampton's.

Later I see Mark on Newsnight, surrounded by some actual big and clever people and his glibness deserts him. He's got nothing to say. That's because he's an artist “working with found and appropriation art” or, as one visitor's card described it “ripping off other people's stuff into a compilation.”

I don't have any pronouncements on the value of the Turner Prize to contemporary art. I know that, if two out of the four artists nominated are essentially “making” art out of other people's art, then we're in trouble. The Prize left me worrying that a kind of academic discourse pervades all discussion surrounding art, so that even the most obscure converted-shed gallery bristles with A4 sheets explaining in dense jargon what the “practice” is all about. I'm listening to all these words, yet I hear just one language, one discourse. An institutional one.

So, as for my actuall mission – did I find any insights into film as art? Oddly, yes. After I left the Turner, I discovered Turner nominee 1993 Vong Phaophanit's new film in the Lightbox. “All that's solid melts into air (Karl Marx)” is shot on video in Laos and is a meditative journey thorugh time and space, reflecting on memory and change globalisation and death. Lyrical, moody, visually rich, thought-provoking and emotionally moving, it encapsulated all that I wanted to find when I entered the Tate building. Phaophanit took me on his journey, transported by images and words, sight and sound, the gesamtkunstwerk of cinema as art.

Gillian McIver is a film maker, photographer and curator.

4And, interestingly, the same school where one of the Turner judges also teaches.