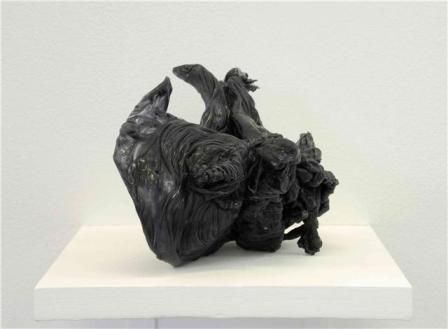 The ultimate uncertainty of the past makes us all the more anxious to validate that things were as reputed. To gain assurance that yesterday was as substantial as today we saturate ourselves with bygone reliquary details, reaffirming memory and history in tangible format.

David Lowenthal (1985) The Past is a Foreign Country.

By pouring hot wax into water, Ula Dajerling re-enacts a tradition from her Polish homeland. Objects created through this action were used to foresee and interpret the future. Carried out on a prescribed day, this evocative ritual is still common place in Poland today. The careful examination of the generated and precisely photographed wax objects reveals familiar forms and shapes recognizable to the viewer. Mythic birds, angels and dragons appear within the contorted fissures, ripples and knotted permutations of congealed black matter. Subjective interpretations of these manifest forms have a dual nature: the perceived angel may be associated with birth or death.

Microcosmic elements are reconfigured in dark detail. Personal histories and present contexts are aggregated, along with processes of heating and cooling. A catalysis of natural elements is compounded with fire and intended action. My attention is drawn to the immediate processes of the work itself. The emergence of shape from chaos resonates with a massa confusa of ancient alchemy, speculating on the origins of matter. An auto-creative work, these physio-chemical processes are set up by Dajerling to stimulate growth and metamorphosis. Non -predictability figures a limitless chain of images without duplication. Dajerling becomes a visual alchemist, summoning up a series of limitless transmutations. Deformed organs and muscles are decompressed in a tumultuous terrain of shiny sinews and smooth ebony densities – untamed profusions of black blood and splintered bones.

Dajerling attempts to quantify the unquantifiable. The white backgrounds and measured frames enact a sense of the forensic lab where fine details can be studied and assessed. Perceptual shots of the object are taken from a variety of angles to render a twelve tonal, panoptic view, where the act of viewing and scanning locates complex centres of focus and inquiry. These materially inert artefacts are never seen as a single, stable entity. Instabilities arise from contextual factors, lighting and setting and more profoundly from the active perception and cognition of each viewer who is active in determining what the thing is seen as.

Notions of the taxonomy arise in methodologies that resemble a photographic process. Present, past and futures are revealed in a series of shifts that foreground the residual materiality of objects suspended in a temporary hypostasis. The inherent fragility of these relics negates a desire to touch and hold in one’s hands. Their delicacy only permits a visual speculation that designates the object as a relic recovered and revered, yet entangled in a conflation of origin, cause and intention. Memory is key to the retrieval of certain sensations. The act of photography and framing seeks to resist a sensory amnesia.

Dajerling’s work provides a field for interpretation and mediation which invites speculation on the nature of transformation and our viewing of it, whether physically or genetically generated. Her intimate and personal investigations address the delicate oscillations between creation, growth, decay and destruction.

Our anxieties to fix and suspend these clues to our personal histories and perhaps our projected futures result in a gentle preservation: a clinical custody of objects that serve as open ended metaphors for every kind of natural cycle, whether within or beyond our imaginations. 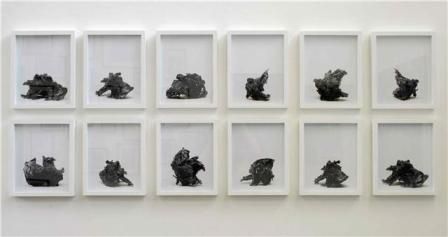