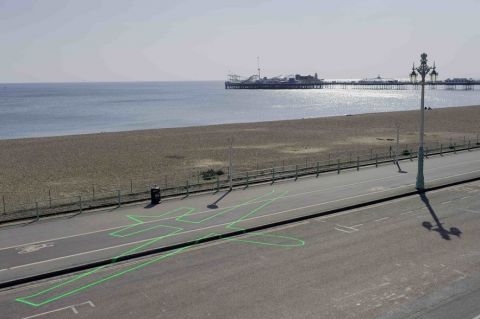 James Bridle: Under the Shadow of the Drone.

A few weeks ago I volunteered to assist in the installation of James Bridle’s latest work Under the Shadow of the Drone, an intervention on the city streets of Brighton (& Hove). Furthering Lighthouse’s ongoing series of projects that investigate the nature of remote technology Under the Shadow of the Drone takes the form of a 1:1 silhouette of a unmanned aerial vehicle (drone) painted in green road paint upon the seafront’s streets for the duration of the Brighton Festival.

On first encounter the sudden apparition and downward-projection of a drone onto a UK street seems to act as war protest. A swift condemnation of either the terror wrought by our government on distant and unfamiliar territories or, at the very least, the ‘unsporting’ manner in which these actions are committed. Half-way through a leisurely seaside promenade, an odd road-marking that seems to bisect the cycle-lane suddenly reveals itself as a stark reminder of the acts of war we remain connected to, however remotely. This message remains potent and important; a very physical encounter that aims to dissolve the remoteness of both the technology and the reality of modern warfare, two things that are anything but remote to the assailants and innocents within the drone’s eyesight. Here, Bridle has precisely torn the veil of security and unaccountability that this form of modern warfare permits by rotating said veil 180 degrees.

However, as the long hot afternoon of installation progressed, I could not help but wonder exactly how appropriate this message was to the streets that were being painted.

Firstly, I began thinking about the particularities of Brighton. Through simple geography and the existence of a twenty mile-wide stretch of seawater, the south coast has a history of invasion, fortification and conflict that long outstrips the recent social history of the area. Witnessing this foreboding symbol of war coming in from across the water taking shape, like something Churchill or GÃ¶ring would have pushed across a map with a stick, I could not help but envisage potential futures where the illusion of Britain’s unbreachable waters is shattered by the strangely antiquated presence of a war-plane (be it manned or unmanned). But similarly, I also couldn’t help but find problems in marrying up the condemnation-role that I had assigned to the work with Brighton’s well-known liberalism and history of anti-war protests. Whilst the work could have been glibly read as exclusively political and confrontational in its previous incarnations in Istanbul and London, capitals with long blood-soaked histories, I found it hard to assign a similarly carnage-thirsty history to lovely little Brighton with all its tolerance, hedonism and buses that run on used cooking oil. I was almost certainly too personally connected to the place to read the installation without bias but even recognising this, I still found it hard to let this city-town take the wrap for the entirety of Britain’s crimes without further inspection.

Fortunately, there were further complications that went beyond personal attachment and I found these within the form of the work. Under the Shadow of the Drone is not a shadowy silhouette forecasting potential doom at all but a green outline painted by road-marking technicians. Rather than the looming presence of a distant bomber, imminent in its attack, we have a life-size outline somewhere between a chalked-out murder victim and the early stages of a digital 3D render.

Long ago I recall a tutor at art college delivering a talk on maps. He said that cartography and pornography remained two zones of representation that have retained their authority. Maps and porn are designed with specific purposes in mind and they invariably are used fairly efficiently for these purposes. This goes some of the way to explaining their widespread presence within some contemporary practices today. The same can also be said of road-marks – the language of cartography spilling out in lurid melted plastic into and onto the real world – directions that tell you to stop, not to cross the line, this is where helicopters land, this is where the hill is steep. They are there to accurately inform and they do this through a range of recognised symbols and codes.

The drone is not a mushroom cloud for the 2010s, a cause célèbre for this generation’s rightfully-fearful innocents. If it is, it is also something far more interesting. Remote warfare is not a remarkably recent innovation but what has made the widespread use of drone technology so central and fascinating to the contemporary mind is the sensation that this is a technology that is equal part virtual and physical. A physical system controlled virtually and remotely by a distant human yet delivering very physical outcomes. It is as if an interloper from the virtual world has assumed physical form, infiltrated the sphere of ‘things’ and has brought its own laws and systems with it, continuing to act as a tool in heightening connectivity, albeit in the form of a large metal plane.

By painting the outline of a drone on the streets of Brighton, Bridle is confronting us with the physical threat of the drone’s power. By choosing to depict it as a symbol of itself in road-marking the apparition becomes more commonplace, more uncanny and arguably more disquieting. But most importantly, the road-symbol-drone reveals itself as a tool that is symptomatic of an situation where the eroding boundaries of the human body, national identity and moral accountability are less and less visibly linked with events, atrocities and repercussions and yet, whilst these new systems of work and play drift more and more across a planet made wholly accessible through a panoply of technologies, Under the Shadow of the Drone‘s improper appearance reminds us in no uncertain terms how national and ideological boundaries are still as absolute as they ever were. There remain aggressors, victims, and the very real danger of war and simply because some nation-states have utilised the stealthy, unseen menace of the drone’s gaze first does not mean that that the distant cross-threads will remain exclusively trained upon Afghan or Iraqi landscapes in the years, decades and centuries to come. The drone has become a symbol of the darker licenses a globalised planet permits and Bridle has begun to show us just how far its shadow stretches.

Carl Gent is an artist based in Sussex, England.