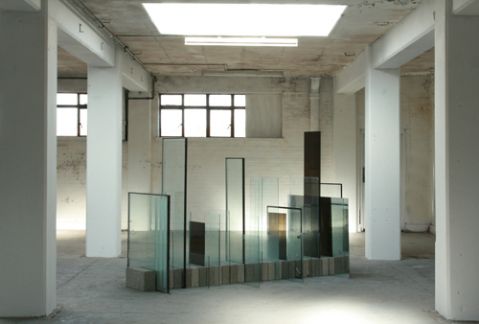 The first ever visit of the British Art Show to Plymouth has created a welcome surge of visual arts activity across the city. Yet few of the resulting fringe projects have been quite as impressive as Vessel, a six-week showcase for 17 international artists.

Curated by Carl Slater and Glen Johnston, the exhibition places resonant gallery pieces in a semi-derelict warehouse space in Stonehouse. Through installation, film, performance, photography and sculpture, Vessel reflects on the location’s maritime past and its ongoing regeneration. By making Plymouth the focus of a collection of work by international artists, it conveys a rare sense of ambition for the city.

In terms of presentation, Vessel is hard to fault. A dim entrance lobby channels you past the disturbing residues of a performance by VestAndPage before opening out into a large, bright exhibition space. The sheer square footage devoted to each of the works seems to mock the rather cramped showing given to much of the official British Art Show work in Plymouth. What’s more, 22 George Place isn’t a comfortable place to be. Damp, cold and decaying, it lends the work an added edge.

Showing art in redundant industrial spaces is not a new idea but, given the themes of Vessel, the setting proves potent. Right by the docks, Stonehouse is steeped in England’s military and trading history. It’s a place of departure and arrival; of industry and post-industrial decline. Heavily bombed during World War II, it was substantially rebuilt in the 1940s and 50s. Now post-war industrial buildings are being torn down to make room for new residential and retail developments.

The contrast between the mundane reality of urban regeneration and the ideals of architectural theory is highlighted in Ben Cove’s film Conversations Regarding the Future of Architecture, 1956. This digital sleight of hand shows a long-playing record made static by a surrounding world that seems to rotate at 331/3 rpm. While watching this mesmerising spectacle and wondering how it’s done, you hear the disembodied voices of eminent Modernist architects.

There’s also something of a Modernist look to Elena Bajo’s The Multiplier Effect, an assemblage of building materials salvaged from the local area. A row of upright window frames and glass, spaced with concrete blocks, imposes rhythm and order on the deteriorating building. Even so, the subtle insertion of a mirror creates an unsettling expansion of the object’s boundaries. Not far away, Blue Curry’s customised cement mixer churns away without purpose. Filled with gloopy sun cream, it’s a seductive object that could also stand as a wry comment on the role of tourism as a stimulus for regeneration.

A slightly eerie atmosphere within the exhibition space is echoed in Graham Gussin’s film Spill. Watching dry ice swirling through this other dilapidated building, I detect references to Stalker as well as more mainstream movies such as The Fog. Meanwhile, Simona Brinkmann’s Fort Worth #7 is a collection of leather-covered sandbags poised between suburban comfort and emergency precaution – a padded barrier ready to hold back who knows what.

Apocalyptic overtones are also evident in Clinton de Menezes’ Procession, which evokes not only emigration and displacement, but zombie movies, with its swarm of mucky figurines marching across the walls. Another piece concerned with odyssey is Jae Yeon Chung’s Nec Plus Ultra. According to legend, these words (which translate as ‘go no further’) were inscribed on the Pillars of Hercules at the edge of the world. Now engraved on a sandblasted pillar in a crumbling Plymouth warehouse, amidst the residue of their making, they speak less of heroic adventure than demolition and death.

Featuring fog, debris, muck, viscous liquid, broken glass and burned plastic, Vessel is full of references to impermanence, to liminal spaces and to shifting states. I’m sorry to have missed the opening-night performance by VestAndPage A Morphological Journey (On the Boarders of our Bodies) which, on the evidence presented, successfully wove more visceral and mythical reflections on death and rebirth into the narrative of urban regeneration.

Martha Rosler’s photomontage Bringing the War Home: House Beautiful, New Series ‘Lounging Woman’, though undoubtedly a trophy piece for the curators, is slightly at odds with the overall mood. It earns its place by representing Plymouth’s continuing association with the military, but its ironic tone seems out of place.

Critiquing the process of regeneration may not seem a particularly novel position for an art show in 2011, but Plymouth is in an unusual position, in that the boom years almost passed it by. It’s still a gloriously rough and ready city, where poor-quality modern construction rubs shoulders with beautiful historic buildings and genuinely astonishing examples of post-war architecture.

Now, as investment dries up, the city has a chance to consider its future on new terms that, for once, might not involve retail development. It could learn to love its stained concrete and capitalise on its acknowledged status as the greatest built example of post-war planning and architecture.

Artists, of course, have a role to play in any regeneration process. In recent years, grassroots activity in Plymouth has tended to focus on the low-key, the itinerant and the improvised. This has its advantages, but a strong arts ecology also needs some physical places it can call its own. Vessel marks the launch of a semi-permanent gallery space in Plymouth, which sits within the artist-led rather than the institutional sphere, yet is able to attract cutting-edge artists of international standing.