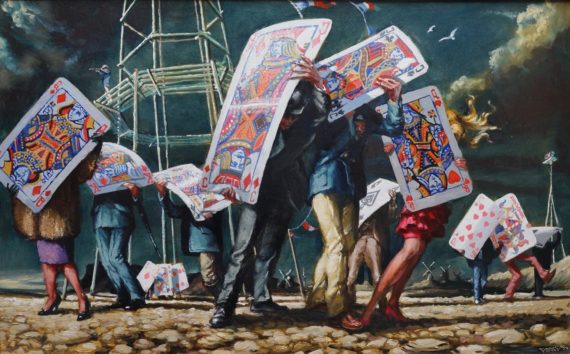 If you value art that lays bare truths about what it means to be human, prepare to enjoy a rare treat: you’re unlikely to get a better opportunity this decade…

In his first retrospective exhibition – delayed, rather aptly, till the end of Covid lockdown – Chris Fiddes, aged 86, lifts the veil on around 50 of his extraordinary works. Most of them are acute social and political commentary. All are painted in oils. They range in mood from dark, savage and sinister to frenetically energetic. The common denominator is a drive to chronicle diverse cultural, social and political episodes of the last seven decades through the lens of a self-confessed artistic misfit. 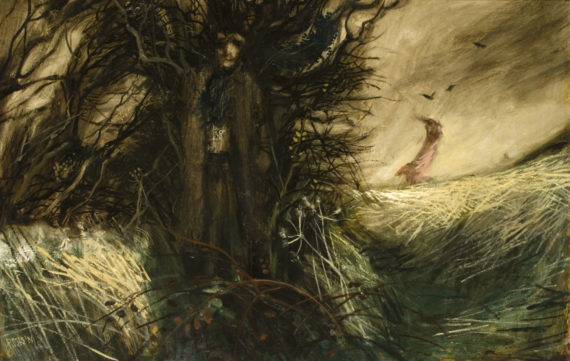 He is conscious of his outsider status: “My story, unfortunately, is that of a man ill at ease in his own time, yet aware that art, in the past, has been of far greater relevance to the struggles of mankind than is the art of his own time.”

In observational quality, nuance and inventiveness the canvasses rival the output of the great early satirist printmakers and painters of the 18th century – like Gillray, Hogarth and Goya. Yet, in style and technical relish, Fiddes’ paintings are idiosyncratic interpretations of anti-establishment thinking, each one inventive in topic and storytelling as well as ingenious in composition and fiendish use of perspective.

His ascerbic vision and powerful draughtsmanship also suggest affinities with the 20th century’s Scarfe and Steadman, whilst at the same time presenting a paint surface almost reminiscent of Turner – or perhaps, in his dynamic brush strokes, even late Titian.”

Northampton Museum & Art Gallery, hosting the retrospective to mark its re-opening after extensive remodelling, is permanent home to 21 oil paintings by Fiddes as well as a few preparatory sketches. In their collection, and in this show, is one of his earliest paintings, ‘Kowloon Riots’. This was painted in 1956 in response to the quelling of the riots that Fiddes witnessed while on his National Service in Kowloon, Hong Kong and it was shown at the RBA at the time.

“Loaded with the dead and the dying, some trailing their intestines, the trucks returned and the corpses were laid out in neat rows and identified with luggage labels. I drew them in secret on the back of a ‘sit-rep’ form as an almost automatic response. Or was it a way of dealing with the horror of it? Then they brought in the prisoners. And the interrogations, with boots and rifle butts, began. I have never been able to wipe these scenes from my memory. But they were to give me my direction as an artist.”

This early experience in Hong Kong gave him new focus and paved the way for things to come: “This carnage, and the interrogations that followed, changed my perspective on all of the art that I had done previously and at art school. Suddenly, it all seemed irrelevant – and somehow arrogant.” 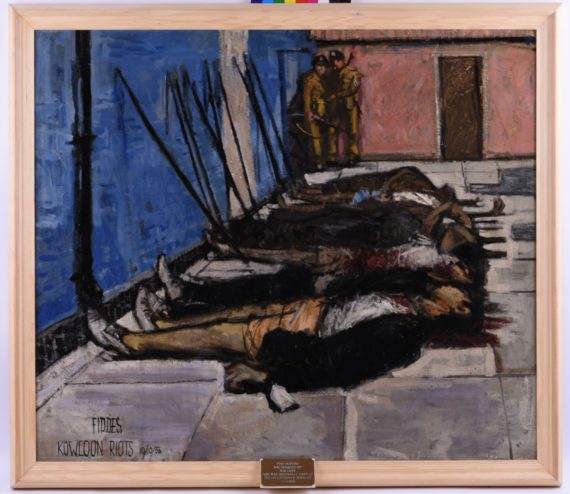 In the 1970s, his new-found resolve prompted him to go over to Belfast during the heat of the Troubles to record, first hand, on both sides of the line, the despair and destruction taking place. Three of these powerful documentary paintings are in the show. Since then, though no longer a war documentarist, he has never eschewed risk in his choice and treatment of subject. 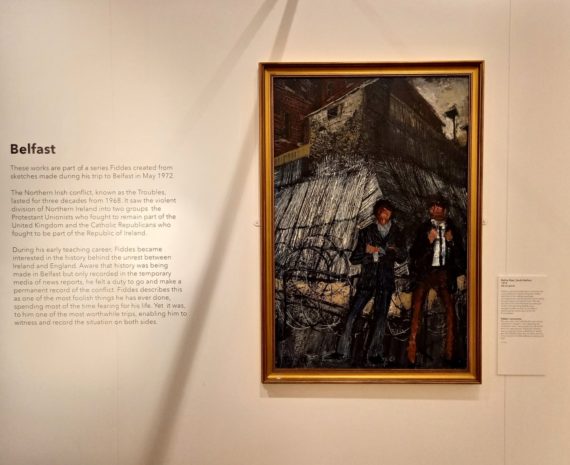 Now, in his mature years, Fiddes has become a contemporary non-conformist with a twist. In a deliberate attempt to shun Modernist thinking and trends, he chooses to create his conveyor belt of pictorial polemic (there are literally hundreds of canvasses not in the show) from a solitary studio setting, based on a purist approach: he relies on traditional painting techniques dating back to Rembrandt, most notably in his insistence on grisaille underpainting and layering up of translucent and opaque colours.

And the veteran polemicist still paints virtually every day. Since he retired, at the turn of the century, he has amassed a huge collection of oil paintings, touching on topics that vary from macro themes like immigration, innovation and artificial intelligence to mundane realities, like bullying and boozing. The paintings in this exhibition reflect the diversity and many are in the public spotlight for the first time. (Regrettably, his most recent works – on Covid and Brexit – aren’t there but maybe they’re just waiting in the wings if Fiddes finds he enjoys this long-awaited stage.)

The show, curated by Beth Socci, is also aptly named: Challenging Perspectives not only suggests an uncompromising artist sailing, solo, against the tide of the fashionable art world to produce his prodigious a sideways look at life. It also reflects the daredevil compositional and perspectival challenges with which Fiddes likes to test himself.

Beyond these topical and technical antics – revealing an acrobatic octogenerian mind – is Fiddes’ lifelong struggle to accept how art has changed alongside societal, technological and historical contexts. He feels that the art world has lost its way, that the ‘tastemakers’ have come unstuck and that all he can do is fight back by pushing against the boundaries of modern thinking, producing his provocative visual documents and re-injecting traditional draughtsmanship skills.

“I have believed in my art with a passion, for why else would I go on doing it? Because I’ve not gone with the herd, there is a distinctiveness about it, which a growing number of people appreciate.

“I hope this show may make people think again about some of the social issues that currently bedevil us – or see them in a new light.”

He hopes, too, that he has re-invented an artistic language: “Much of my painting has taken the form of reportage. And that always presupposes that there will, one day, eventually be someone who will look at your work, and say ‘So that’s how it felt to be living in Britain in the time of Covid’. Or the Common Market. Or during the troubles in Ulster. And that’s a form of immortality – and I suppose it’s the sort of success that I would look for. And, if I have painted my pictures with care and thoroughness, that is why.”

If the images get you hooked, there’s also the chance to hear what the artist has to say about them in two ‘Evening Conversations with Chris Fiddes’:

Friday 17th September: Pictures in the exhibition. Highlights, commentary and background stories on key paintings featured in the Chris Fiddes Challenging Perspectives exhibition. In response to your questions, Chris will expand on the ideas behind some of his pictures, and the circumstances associated with their creation.

Friday 24th September : Art of our time. In a brief talk, Chris will challenge some common assumptions with regard to the art of our time and seek to address the issue of whether Art has a viable future in the electronic world of tomorrow. The evening will then be opened for discussion