Walking In My Mind - a-n The Artists Information Company 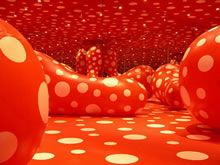 Set your Sat Nav for ‘Walking In My Mind’

The Hayward’s summer exhibition, ‘Walking In My Mind’, invites visitors to wander – and indeed wonder – through a number of installations demonstrating the creative mental spaces of ten contemporary artists. Having previously struggled with Michel Gondry’s The Science of Sleep[1], where much of the action occurs in a TV studio inside the lead character’s imagination, I was apprehensive about attending an exhibition promising “…an expedition into the mysterious mental processes of creativity.”[2] It’s not that Gondry’s film isn’t a masterpiece, it’s just that I found being in someone else’s head extremely discombobulating.

In this exhibition – like Gondry’s film – it is hard to get your bearings. Many guides are available to reorientate you at every juncture but while seasoned Hayward visitors are well aided by their knowledge of the building’s layout, newcomers be warned! You could easily wind up trapped in a darkened room of floating, dismembered body parts or faced with some impossibly small (Alice-in-Wonderland-meets-Marcel-Duchamp) doors nestled in briefcases.

In reference to this show, Waldemar Januszczak has claimed that themed exhibitions can be as “floppy as tracksuits”[3], and I would agree this is a rather woolly remit. After all, aren’t all artworks on some level a depiction of their creator’s cognitions? Fear of mental-motion-sickness aside, I therefore entered the exhibition willing the artists to redeem the concept. I hoped for unique displays on the accumulation and filtering of ideas for art; on the personal point of origin for work. In short, I was aiming to gain something different from a behind-the-scenes tour through thought factories.

Over all, Yoshimoto Nara’s ‘My Drawing Room’ is the true grist of the lower gallery’s mill. His piece – a little, un-enterable cabin replicating his childhood bedroom which can only be viewed via the windows and door – is as distant and uninhabitable as any memory, yet also every bit as warm and enticing. Its small scale speaks, as I’d wanted, of an origin, and perhaps an origin Nara has out-grown but to which he fondly and repeatedly returns. This is a house of thought that informs but never dominates. It represents that life-structure that our childhood gives us no matter what. And its cutesy and kitsch styling is an apt adjunct to Nara’s cartoon-like work.

Upstairs, contrasting well with our ability to look in on Nara’s safe-house, Yayoi Kusama shows us what it is like to look out from her world. This is a world where polka dots define the landscape, a world where Kusama herself feels as though she is scattered among a repetitive pattern, where masses of spots total her feelings of insignificance. This world, thanks to an outside sculpture terrace, the decorated trees of the South Bank, and a gift shop brimming with merchandise, reaches cloyingly after the visitor – even if without the tightness of grip endured by Kusama herself.

To my mind, triumphing over all the installations is Chiharu Shiota’s ‘After the Dream’. At first I was nervous to enter because Shiota’s room, which is filled with densely intertwined black yarn, looked a little too spider-webby for my liking. In reality, it is nothing short of mesmerising and if it does have any similarly with a spider’s web it comes through in its stickiness. This isn’t the tangible stickiness of Hirschhorn’s tape, but rather a gentle compulsion to stay. It is a lure or pull to wander through the open domes carved out by the crisscrossing of thread and not, as with Hirschhorn’s caves, an enveloping disorientation.

In one area, among the endless triangles drawn by the mesh of yarn, is a set of floating, white, dress-shaped objects. Continuing the theme of pulling, they appear at once both dragged down into the twine and somehow its anchor. And yet their nebulous potential has a different hold on us. Vague and yet formed, they appear as though they are on the brink of materialising into something more recognisable, like a detail just coming into focus. As the title suggests, they therefore offer the feeling of waking from sleep as the world settles into place, but so too do they evoke a mechanism for the capture and evanescence of ideas: soft webs and their foundling forms, delicate and full of potential. And perhaps we cannot quite fathom what these beings are because, let’s face it, even if we could see in Shiota’s head, could we ever see things exactly as she does?

This discussion between the indistinct and the distinguishable is present also in Mark Manders’ work. In his sparse room, larger scale sculptures are interspersed with flattened creatures of indecipherable genus. While they do indeed draw one into a discussion of origin, at times this feels more akin to the morbid fascination derived from determining the former state of road-kill. In a somehow ‘art historical’ fashion his pieces seem to evidence a place where great thoughts once were not are.

Finally, Pipilotti Rist’s ‘Sleeping Room’ provides the ultimate chill-out lounge for those who are physically or psychologically lost. This ambient den with large round sofa, images that stray across every surface, and a circular audio of soothing mantra-like phrases blankets the visitor in much of the calming meditative state Rist draws her work from. Unfortunately, I was soon dizzied by the swirling, not to mention a waning ability to navigate my way through the minds of others – let alone find the exit. Feeling my way along one wall I ejected myself into the gift shop and, soon, the familiar comforts of thinking and walking, rather than walking in thinking!

Charlotte Frost is a writer/researcher in art and technology, focusing on digital and new media art forms and post-internet critical strategies. Her specialism is the impact of internet technologies on the history and criticism of art. She writes the 'Digital Practices' news column for a-n and was formerly the co-ordinator of a-n Collections.