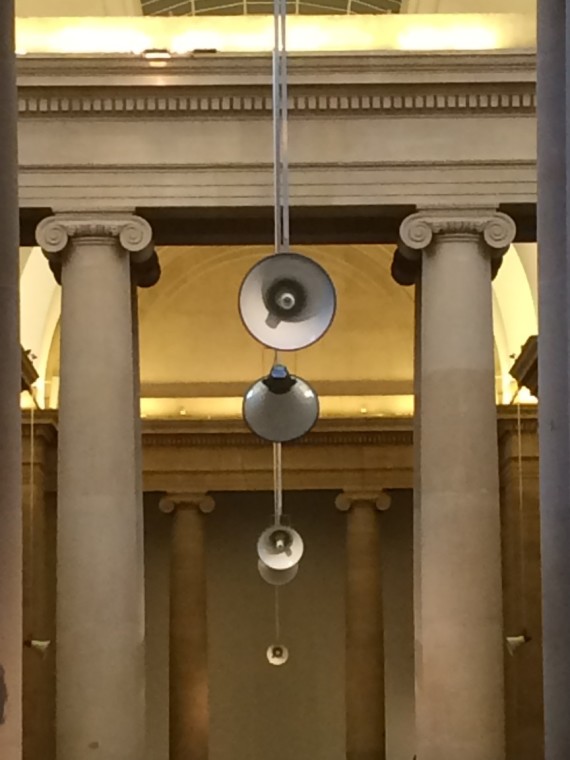 Fourteen large speakers, strategically placed throughout the expanse of Tate Britain’s Duveen Gallery, emanate evocative sounds. Initially it is difficult to know where the cries are coming from. As you move towards one speaker, you are called to another. Sounds echo throughout the space in distant conversation. This immersive exhibition is part of Susan Philipsz’s contribution to ’14 – 18 NOW’, a cultural programme marking the centenary of the First World War.Each speaker corresponds to an instrument.  Philipsz has recorded fourteen British and German brass and wind instruments that have been mutilated in conflicts over the last two hundred years.  Although fragmented and hard to distinguish, the recorded notes are based on the tones of ‘The Last Post’, a signal used to let lost and wounded soldiers know that it was safe to return to base. The gallery feels as though it is in mourning, painful and lonely with the last sounds of breath. To fully  experience and appreciate the installation one needs to take time to listen and contemplate. Each speaker holds a story, and that of a ruined bugle found next to the body of a fourteen year old drummer boy at the Battle of Waterloo is one such example. Philipsz was more interested in seeing what sounds could be produced than in creating music, even if it was just an exhalation of breath. Accompanying the exhibition are two videos, documenting the recording sessions of musicians experimenting with ways to produce sound from the crushed, bullet ridden instruments salvaged from battlefields and trenches.

In addition to successfully capturing the sounds and feelings of wartime loss throughout the exhibition space, Philipsz’s work serves as a moving reminder that conflict and death prevail today.