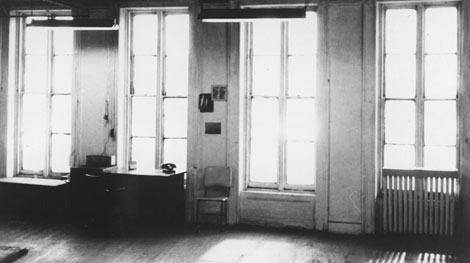 Minutes into Michael Snow’s 1967 film Wavelength, a woman enters the shot, switches on a radio and Strawberry Fields Forever crackles into the room.

Living is easy with eyes closed
Misunderstanding all you see

These are fitting words, for Snow helped pioneer a moment in experimental filmmaking that aimed to free the spectator from cinema’s illusion and the narrative gymnastics of the preceding decades’ avante-garde. We the spectators were to become active, via a style (later dubbed “structural”) that focused on the essential form of the medium itself.

Upon attending a sold-out showing of Wavelength earlier this month at the BFI, I discovered that the film is notoriously difficult to describe. On one hand there is what happens, that is, a forty-five minute camera zoom across a spare New York loft. It proceeds and pauses, jerks and – at least once – pulls back. Fades to white are common, as in-camera editing reveals the choppy passage of night and day. And the faint outlines of a murder mystery flit in an out, almost sardonically.

To truly describe this film, the word experience is key. Together, the audience undergoes a gradual loss: their collective focus intensifies as the frame narrows towards its final point. Viewers weather a growing frequency of sound that rises until it is beyond the range of Snow’s recording equipment. As this sound reaches a nearly unbearable pitch, the camera closes in on a photograph, which then blurs into blankness.

The film’s slow movement inward keeps the audience locked in real time. But when viewing this film, I was momentarily taken out of the present when Strawberry Fields began to play. It reminded me just how much Wavelength is a piece of film history. And what I want to know is, how is our experience of this film informed differently in 2009 than it might have been in 1967?

Wavelength was part of a political development in the arts. Before film historian P. Adams Sitney named Snow and his cohort “structural” filmmakers, they sometimes called their work “materialist”, referring more explicitly to Marxism’s “dialectical materialism”. This helps us understand their commitment to undermining the techniques of image-production and granting productive power to the viewer.

After the screening, a group of panellists, including filmmaker William Raban and BFI Head of Exhibitions Elisabetta Fabrizi, discussed Wavelength. They applauded it for all the reasons that made it radical forty years ago, providing valuable insights into Wavelength’s context. Unfortunately, they didn’t bring this political discussion into the present, aside from the suggestion that we simply can’t relate to the film’s politics now. Why can’t we? I don’t think we’ve moved on from notions concerning the spectator or the interplay of form and theory. Works like Wavelength can help us look at our current methods of exploring the relationship between the artist and an audience. We might find that, living in a similarly destabilised time, we can respond to Snow’s Wavelength not only as a brilliant artefact, but truly in the present tense.