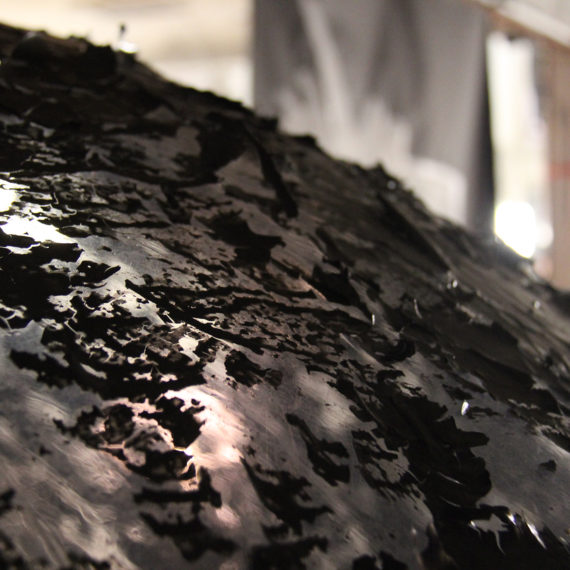 From 16 to 18 November 2018, the Kühlhaus Berlin showed EXCHANGE BERLIN organised by UK based arts organisation SLUICE. In this innovative exhibition, art from Berlin met art from around the world. On several floors, visitors could see exhibitions by international artist groups, and listen to art talks and music. The ground floor focused on projection and video art while on the upper floors painting, sculpture, installation, sculpture and much more.

This review focuses on the work of UK based OSR Projects https://osrprojects.net/and the new and the experimental work made by the four participating artists as part of an ongoing project entilled Weather Station. Elaine Fisher, Alexander Stevenson, Laura Hopes and Simon Lee Dicker presented an impressive interplay of experimental art and global environmental issues.

The four British artists are currently working across the globe in the United Kingdom, Sweden and the United States and are representing the independent art world. They are exploring global political developments in their art projects. Their “Weather Station” project is an artistic response to the increasingly extreme weather and flood disasters. They examine and reflect these radical changes in an artistic way. Also, our relationship to landscape and environment is an important topic of OSR Projects.

The exhibition shows how well the four artists are working together and how their works perfectly complement each other and communicate with each other, while each work has an important individual statement for itself. With black and white being the main colour, the artists deal with essential questions about nature, our planet and our relationship with it in theirs sculptures, paintings, video art and installations. They refer to the elements themselves: In flotsam from the sea, for example, which Simon Dicker presents in an impressive way in large minimalist drawings. Laura Hopes shows minerals and stones lined up in a showcase reminiscent of scientific museums, next to modern technology (video art on a monitor).

Elaine Fisher www.elainefisher.art explores archetypal questions about femininity, soul and nature in her installation “Spirit Lake”. Reduced video art of a falling leaf and a crow in flight is presented on two monitors on an upper and a lower level, a conscious and a subconscious level. The viewer enters the consciousness and the dreams of Elaine Fisher. The installation also includes a deliberately disturbing sound installation in which you can hear the cries of a crow in slow motion. The installation soothes and troubles the visitor at the same time. The symbol of the crow / raven is a symbol that has been accompanying the artist for a while. Elaine Fisher comes from the UK and now lives in the USA – both are countries with extreme political events and presidents, as she stresses. These developments and their symbols have influenced her work.
The arrangement of the two monitors is well-chosen: the screen placed on top of the ladder shows a crow in flight and the crow sounds. For Fisher it stands for the real, active life, the real and outer world, while the monitor lying on the floor beneath symbolizes the unconscious and the inner feelings. The two levels of consciousness depend on each other and create each other. Fisher wants to find out when and why something becomes conscious in our mind – also in her own life.
One of the videos was filmed at Spirit Lake on the shores of Grand Lake, Colorado. The name comes from the Arapaho Indians. At Grand Lake, the legend of the Buffalo, a supernatural monster rising from a hole in the open water of an ice-covered lake in winter, was born. Many other legends are connected to this lake, such as the myth that when the lake is frozen, you can hear frightening screaming sounds of women and children. The atmosphere of this sinister ice lake is evoked by the minimalist and intense black-and-white videos and the touching crow-sound installation.

Beauty, landscape and environment play an important part in “Not to be Taken” (2016) by Laura Hopes http://www.laurahopes.com . In a historical showcase she arranges video art, pieces of stone and a wallpaper print. In this installation, she refers to William Morris, who was the director of the Devon Great Consules mines in the 19th century, when they switched from copper mining to the industrial production of arsenic. It was this arsenic from the Devon Great Consuls mine that was later sold to produce what became known as the poisonous pigment “Scheele’s Green” – the pigment that was used in the famous wallpapers of William Morris. Laura Hopes points out the dichotomy of the machine-made beauty of Morris’ wallpaper prints and the underlying environmental destruction and the subtle but continuous poisoning of nature with arsenic in an aesthetic and conceptual way. The direct stacking of a reprint of the arsenic wallpaper and natural elements (real stones) in her installation makes the visitor aware of this conflict. This unpleasant feeling is intensified by the close and intimate arrangement of the objects in the small showcase. Thus, the dichotomy is almost claustrophobic: the beauty created by mechanical production, that also leads to poisoning and pollution – the destructive, which is inevitably connected with it. In “Not to be Taken” Laura Hopes deals with a theme that is typical for her work: Scars in at first sight completely beautiful landscapes. These scars can be of various kinds, and also ambiguous: The sublime can produce a feeling of “pleasant terror”, a strange mix of pleasure and pain.

The artist Alexander Stevenson http://www.alexanderstevenson.com/ also works with a combination of video art and installation. In his work “Untitled (experiments to describe the Southern Ocean as a commons # 1)” (2018), he explores man’s relationship to cartography and the feeling of being lost. In his installation, he deals with the geography of the Southern Ocean in the Antarctic environment, which is not fully recorded and registered yet. The directory of locations, GPS-systems and the sense of security and orientation we associate with it are important topics for Stevenson. He asks himself the following questions: Could we also feel in a post-GPS world? And is our sense of location and place based on the generally accepted official system of cartography?

In the exhibition, he shows a very slowly changing object on a screen that reminds the viewer of maps and of cartography, in his minimalist video art work. On the floor in front of it lies a white lifejacket, which inflates itself in a hardly noticeably way (15 minutes long). Will the “lost person” in the post-GPS world be saved by it? Or do we maybe not need any rescue? The fact that the lifejacket is made from bin bags, which is hard to see at first glance, is one of the many clever and subtle references to ecological themes in this exhibition.

Hidden in a corner is one of the centerpieces of the exhibition: “Carbon Coated Weather Station” by Simon Lee Dicker http://www.simonleedicker.co.uk/

This piece sums up the tonality of the exhibition and the many references to environmental themes, in a clear and yet subtle way. It is a black ball that reminds the viewer of a globe, with peeling paint. When you look closer, it turns out to be an inflatable plastic ball.

Underlying elements of the work are the feeling of misanthropy and the pollution caused by carbon. But also aesthetic experiences and techniques of the great masters of art, such as Bruegel and Hieronymus Bosch, have influenced this work.

“Carbon Coated Weather Station” corresponds to the large-format drawings of “Memento Mori(2018)”, which hang freely in the room and show almost shining abstracted drawings of flotsam from the sea on a dark contrasting black background. The lighting is chosen particularly well here, and as with a magnifying glass or in the spotlight, a single individual object from the sea stands symbolically for fading and the cycle of nature and life and of the relationship of nature and man/civilization. The fragments of formerly botanical life in the sea, which were washed up on a tropical beach (the artist found the objects on the beach of Sri Lanka), painted with acrylic paint, chalk and ink are exhibited in an imaginary isolated empty man-made showcase which is the black canvas. The artist also uses it as a trigger for an emotion that is hidden behind what the object itself contains.

Again, the ecological aspect is extremely important here. On the drawings you can clearly see the traces of the long and eventful journey of the flotsam:  Cracks, holes, furrows and faded spots have replaced the former life and intactness. They evoke death and show the artist’s personal experience in a collective consciousness of global environmental destruction.

The international cooperation of the artists of OSR Projects and international exhibitions such as Berlin Exchange are essential for the group and their way of working together. However, they are aware that they deal with an ambiguity: They focus on environmental issues in their art project, but by travelling long distances by plane or car to do joint exhibitions, they contribute to environmental pollution. This is something they care about and they want to find a way to deal with this ambiguity. So we see that OSR Projects have a holistic ecological approach in both their conceptual art as well as in practical considerations.

Sandra Ratkovic (*1980, Frankfurt/Main) is an artist and editor in chief for Chased) Art & People and lives and works in Berlin. http://www.chasedmagazine.com