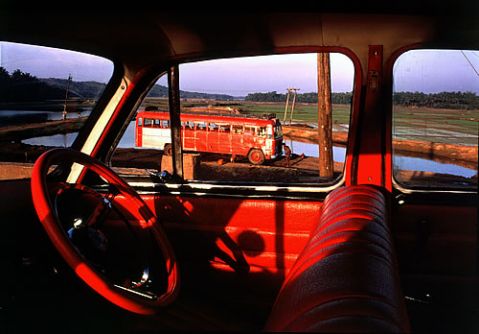 Where Three Dreams Cross is the current exhibition at the Whitechapel Gallery, open until April 11, 2010. It is a showing of 84 photographers native to India, Pakistan, and Bangladesh of over 400 photographs depicting the subcontinent from within. It challenges our previously decided notions of the east through the eyes of the west. The exhibition is cleverly divided into five themes. Rather than organizing the exhibition by country or chronologically, the viewer passes through rooms labeled The Portrait, The Performance, The Family, The Body Politic, and The Street. This structure emancipates the exhibition from feeling like an ethnographic museum. The power of self-representation is on show as each section highlights the shift from the European colonial view of the subcontinent as a place entirely made up of chaotic cities and tragic history. The works of Saibal Das under the theme of The Performance depict a very different view of India, one from under a big top circus tent. In many of his past works, Das has struggled to depict the fusion of the traditional and the modern. As with his photographs of the circus shown in the Whitechapel exhibition, Das illustrates a blend of the illusion of the stage lights, ablaze with action, with the dark and almost chilling world behind the mask of fantastic entertainment. It is as if he highlights the amalgamation of the western and eastern points of view while articulating the fact that because the west has dominated the world’s view of the subcontinent, it will forever be part of the representation of India, Pakistan, and Bangladesh.