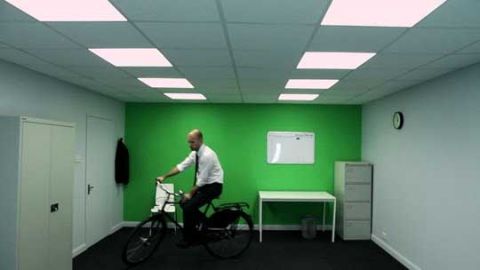 As if the title of Workplace were not explicit enough, this exhibition of video from the past decade at the Mead Gallery is structured through a series of discrete rooms which echo the formal dimensions and to some extent, the aesthetic of the contemporary office. Foregrounding both a sense of familiarity and claustrophobia for the viewer, the exhibition retains much of the now conventional white-cube gallery format, drawing points of comparison between office and gallery as workplaces through the conjunction of these two references. The exhibition Workplace is therefore cleverly navigated from within a pseudo-workplace framework or template, sketched out in terms of expected social, psychological and physical workplace rules. This ‘place’ is considered in terms of a real or imagined arena for work (activity, exchange and payment), whether this is artwork or another type of work altogether.

The psychological conditions of the workplace are scrutinised in The Working Life (2013), a newly commissioned video by artist group Superflex. In this, a hypnotist addresses the viewer directly through an intimate means of display in a theatrical parody of workplace motivational theory. Offering a possible means of escape to the dissatisfied worker, the video offers a poignant picture of the pressure, dread, boredom and anxiety of today’s workforce trying to make a living during the world-wide economic crisis. This piece simultaneously raises questions about the precarious nature of today’s artists and the financial or cultural value of their work in a time of huge arts cutbacks. Superflex describe their projects as ‘tools,’ a term perhaps more closely associated with commercial business, thereby underscoring a functionality and purpose to their work, which is on one hand art, and on the other a quasi-strategic document for workplace staff coaching.

The Trainee (2008) by Pilvi Takala is an installation drawn from the artist’s experiences at international corporation Deloitte, where she ‘worked’ as a trainee for several months. Inversely performing the role of the worker, the artist tested the complexities of workplace attitude and behaviour from a relational perspective without her ever engaging in any recognisable workplace activity. The artist is shown sitting at an empty desk or spending the day in a lift, simply thinking or doing ‘brain work.’ Documentary-style footage records her co-worker’s attitudinal shift as she calmly and quietly challenges the established workplace rules without ever disclosing her real purpose for being there. Most poignant is the eventual social isolation of the artist as the behaviours of staff lead to polite avoidance, a strategy familiar to many of us for tacitly dealing with undesirable co-workers. Takala’s installation more widely raises essential questions about the role of the artist as perceived by others and whether artwork can be considered work, tapping into contemporary debates around the financial investment in or payment of artists.

João Onofre’s video piece explores the role of artist in relation to that most traditional of artistic workplaces, the studio. In his seemingly simplistic video Untitled (Vulture in the Studio) (2002) a vulture descends into the artist’s studio space in an obvious state of disorientation and helplessness. The bird is alone, displaced and trapped, a poetic reflection perhaps, on the role of the struggling artist within his/her framework of operation, whether on a micro or macro scale, self-imposed or otherwise.

The physical constraints and the creative potential of the workplace are further investigated in John Wood and Paul Harrison’s large scale cinematic projection. In 10 x 10 (2011) the viewer’s perspective moves between a series of structurally identical office spaces housing a suited office-worker (one of the artists) engaged in a variety of actions: making paper aeroplanes, hiding behind a filing cabinet and vacuuming the carpet dressed as Spiderman. Like many of Wood and Harrison’s previous works, 10 x 10 is a bizarrely dramatic and farcical exploration of the parameters of their physical environment, frequently the office-cum-studio, developing a narrative through the artist’s use of text, tension and repetition. The piece offers a playful, if somewhat disconcerting view of the workplace, and the strategies for entertainment and/or survival one might engineer to endure another working day. The scale of the projected image and the high production value of 10 x 10 elevates the status of these simple actions and their significance to the average worker. That this ‘time wasting’ is the subject of Wood and Harrison’s work leads the viewer back to questions of a worker/artist’s function and worth, as highlighted in Takala’s piece and others.

Workplace therefore offers to the viewer an opportunity to contemplate their own workplace, that of the artist and the concept of the workplace more broadly. A series of challenges to established workplace regulations (isolation, humour, dissatisfied workers and workers who do no work) question the purpose and nature of work itself. There is a sense of claustrophobia within the gallery spaces and the themes on display. This is heightened by many of the artists’ engagement with the theatrical, an effect best emphasised through large scale projection encompassing the viewer’s field of vision such as in works by Wood and Harrison and Onofre, or the monitor and headphone set-up favoured by Superflex which foregrounds a sense of intimacy and direct engagement. Although exhibited in entirely discrete spaces that appropriate elements of the modern office’s aesthetic, clear thematic strands run throughout the exhibition, video soundtracks leak between spaces and motifs of the workplace are repeated. The result is an extraordinarily complex yet cohesive exhibition which self-reflexively explores the workplace from both the point of view of the worker and of the artist, posing far more questions than it seeks to answer. 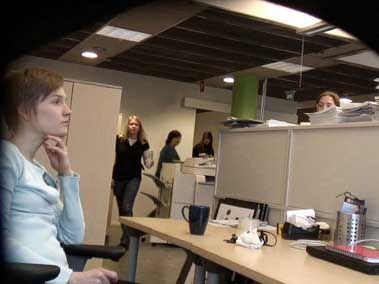