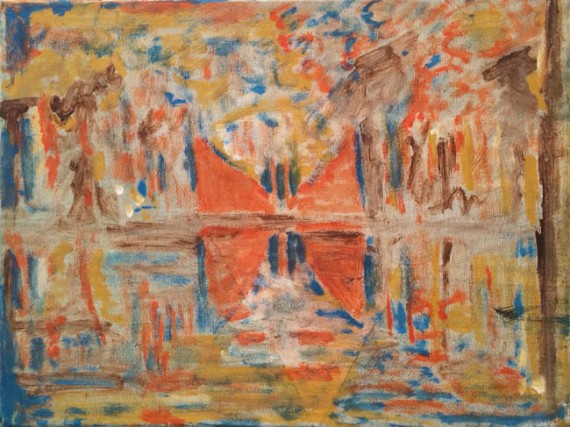 In the notes for Writhe and Jerk at Transition Gallery, we are told the paintings are ‘wrestling something out of the materials, their battered beauty is hard fought for, writhing and jerking on the canvas’. Wandering around the exhibition you can’t help thinking about that wrestling. Long ago in my childhood I remember watching Grandstand on Saturday afternoons at my grandparents house. Invariably it would be the wrestlers that fascinated most – Big Daddy versus Giant Haystacks the pantomime contest we all looked forward to and cheered with gusto. Looking back, it always felt as if the wrestling arena was full of smoke: overweight athletes toking on tabs before the bout and not giving a damn to the consequences. It probably wasn’t the case at all of course – I’m no doubt getting confused with darts played in smoky working men’s clubs – but our mind can play tricks on us.

The paintings on show here prowl and leer at you from the walls like bad memories. You can almost believe they were outside puffing on cigarettes before stepping inside the ring. There’s a sense of belligerence as they encircle you and it’s necessary to watch your back as you study their form. Unlike the wrestlers from yesteryear however, the paintings are relatively small. They’re something akin to Satan’s Cavemen, those tenacious midget wrestlers in the film Nacho Libre. Compact but muscular and utterly terrifying: a tag-team from hell.

Sarah McNulty’s Dug greets our entrance. Its simplicity belies to confuse and we stumble over its wires. At once both nothing and something, the suggestion of form is cartoonish and carefree. You think of furrows and fields and barbwire. Likewise her Flat Steel features similar thick lines, though this time giving the sense of comedy eyebrows or hairy caterpillars. The paint has moved quickly over the surface as if trying to escape – it squirms and twitches in spite of itself.

The same could be said for Rachel Busby’s work, but here recognisable motifs are allowed to feature. The two works on show Tree of Life and Tree of Life V appear to be paintings of still-life paintings of plants – they are painted quickly and threaten to burst from the frame that rings them. Each is a quick gesture that bounces around the canvas. The mood is light and the washes of colour are thin and see-through, like bone china in sunlight.

The paintings by Terry Greene and Brendan Lancaster ramp up the humour. Whilst the other work appears to have been painted with brushes, Greene’s seem to have been formed from something else. This is less about fluid motion and more about slapping and grappling. The acidic paint looks sticky or tacky, as if it’s been applied with a stamp; there’s a sense of fun and play at work here. Bunting, watermelons and carnival atmosphere are imbued in the angular display. In his painting To Love and Serve this City, Lancaster offers us the underpants-over-tights injection of theatre. Like a clunky super hero whooshing across a page, there’s an element of slapstick in the performance. However, as with Roadside Picnic, the sense of lightheartedness is blurred and brushed out by an overwhelming sensation of drizzling reality.

It’s bloody pouring down in I Miss the Comfort in Being Sad by Gordon Dalton. Peering through the curtain to the outside world (or is it an interior void?) there’s the feeling of being stuck in a dead-end town with only memories for support. A tinge of blue sky presents a sliver of hope. Other paintings have been painted over to create this work and we float in and out of them all, desperately trying to find a foothold. It’s like looking into a television screen filled with smoke. Dalton’s muscular works are dry, dusty visions moments before a spark sets them alight. Struggling to stay on the canvas his paintings are the epitome of the writhing and jerking nature of the exhibition; a half-nelson grip guaranteed to send you reeling.