You Gave Me A Sky But I Am Not A Bird, Augustin Rebetez and Friends - a-n The Artists Information Company 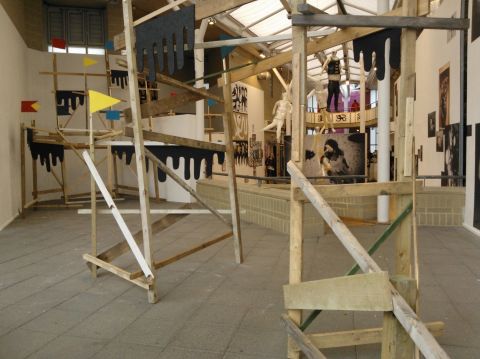 You Gave Me A Sky But I Am Not A Bird is Augustin Rebetez’s first solo exhibition in the UK, credited, not only to the artist himself but (Rebetez) ‘and Friends’. It’s clear he has many of them. They are the legions of telephones, plug sockets, pipes and mini coal-miner men cobbled together from paper and sticky-tape that appear in his animations, drawings and prints. There are also his collaborators from the human world – dressed for a grungy masquerade. These zombies lurch about the self-adhesive photographic prints which are pasted high and low onto the high gallery walls like club posters, occasionally overlapping each other, slightly wrinkled.

There is a sense of shabby carnival about Rebetez’s still images and also a persistently dark, bleak aesthetic of a night that never ends. This is unsurprising as Rebetez goes to great lengths to control the lighting of his photographs, often working on the North Norwegian Island of Senja during the winter months to take advantage of its short dark days. Even when back at home in Switzerland, Rebetez says he never uses natural light – either shooting after dark or blacking out spaces entirely. The obliteration of light often features as subject matter for Rebetez’s striking animations – rooms are steadily painted away, line-by-line. The oily black travels up and along pipes, over windows, floors, ceilings until all that remains is a scruffy void.

Rebetez’s stop-motion animations creek open. We journey through doors and passages which each open up new and secret worlds Remenicent of the animations of Jan Švankmajer or the creepy theatre of William Kentridge, they stem from the artists interest in cinema, or perhaps out of a frustration in the cinematic limitations of the still image (that said, many of his photographs look like stills or are taken during video shooting). The main animation shown, Maison (13′, 2012), follows the narative of several humanoid characters who exist as sometimes wall drawings, sometimes paper models. Navigating a world of semi-derelict buildings and cardboard high-rises – several have a white O for a mouth, a permanent Munchian scream. The environments they inhabit are constantly under threat from the all-consuming black, the cosmic nothingness – the poor unfortunates at one stage collapse and roll about on the floor, victims of an unseen apocalypse. Houses and shelters are important in Rebetez’s work, the wendy-house style shanties acting as wormholes – things to fall into or crawl out of.

Maison is projected within a small permanent blackbox space within the UH galleries, enabling the viewer to notice tiny beautiful details within the animation. Three flatscreens positioned on the first wall as you enter the exhibition display three further animations, equally as engaging but hung at peculuar heights. In each, inamnimate objects are brought to life. A water pipe snake-licks open a door. Wheels turn as a sharp shark tool bites menacingly at the air and little buttons approach the camera like curious mice. Organisation or even perhaps a kind of mobilisation of objects are recurrent themes in the animations. Black telephones scramble on a grubby pink tiled floor before lining themselves up into a miniature army and charging off, leaving their receivers to temble with unkown voices. Back in Maison – a small collection of mortice keys wait in front of a carpet sea in formation, taking orders from a commander-in chief key as he issues instruction before they go ‘over the top’ and into the blue. There is also a sense of constant activity and productivity of objects, especially those whose use is far behind them. Clock hands revolve madly as abandoned factory items and machinery parts move about in an endless jumping stuttering dance made all the more manic by Rebetez’ frantic method of image collaging.

Made in collaboration with Noé Cauderay (sound by Pascal Lopinat), the animations are by far the stand-out works of You Gave Me A Sky… Although still photography has been central to Rebetez’s work in previous years, there is now a definite shift toward animation, installation and more scultpural works and environments. Several wooden sculptural constructions are on display at the UH galleries. Adorned with jaunty non-specific flags, they drip with cut-out black coloured wood gloops and turn the UH galleries into a playground to be explored. Cauderay and Rebetez, who sometimes work under the collective name of ‘Krups Ideal’ are currently developing new installations combining still photography, animation and sculpture for the 2014 Sydney Biennale. You can sense that Rebetez prefers this collective style of art-making, it is very much a party that everyone is invited to, sometimes with a lesser degree of success. In the centre of the exhibition hang several hollow human figures made from cellotape and clingfilm – a collaboration with the UH students during the exhibition-making process. These particular ‘sculptures’, as opposed to the wooden structures which the students also contributed to, lack the artists particular style and are something the exhibition could do without.

You Gave Me A Sky….also displays Rebetez’s drawing and painted works, hung in a similar way to the photographs with overlaying and collaging, some in frames on paper or cardboard, some acting as wallpapers. Here we see another form of animation. Although the camera acts as a quicker way to record than the hand, it can lack the natural dynamism of drawing. Wiggling Alice in Wonderland caterpillers and wobbling jellyfishes, mazes of heads and multi-limbed lost aliens fill up a checker board. We find something between the illustration of darkly magical folk tales and cutsey Japanese lunch boxes – smiling boys, girls and animals, holding hands/tentacles in happy-land. The drawings are a place for preparatory sketching of the objects, figures and stories that can be found in his animations but also allow for new ones to appear and be played out. They result in compositions rather than the open ended narratives found in the animations and photography. The drawings often incorporate text, in the aesthetic style of the shouty cartoonish writings of Bob and Roberta Smith. The statements, slogans almost (‘We cry stalactites’, ‘We work for the night’) give the drawings a poster-like quality with the words coming from Rebetez’s text-based work Youth Art Makers Manifesto reproduced at UH in English for the first time.

It could be argued that there is too much of a mish-mash of work on show and You Gave Me A Sky…. lacks a necessary editing process and clean finish needed to make this exhibition as good as it might have been. Rebetez, however, has rightly used the opportunity at UH to do some experimentation, try out different forms of display and take some risks – these without doubt pay off. With increasing visibility and exposure (Last year he beat off competition from 750 artists to win the Vevey International Photography Prize, next year’s Sydney Biennale and with two solo exhibitions already lined up for 2014), Rebetez is certainly an artist to watch with great interest. One of Rebetez’s framed drawing shows a boys head staring out into the exhibition, wide eyed and slightly panicked, triangular drops fall from his head in a kind of nervous sweat. The words ‘The Big Quest’ are written beneath him. Perhaps this is Rebetez pondering on the future, wondering what and where to go next. He needn’t be worried, at the moment all possibilities and avenues are open to him. Much of the quest is yet to come.