I was part of the Apps for Artists workshop run by Alex Peckham, the technical lead at Blast Theory, on the second week I was here. It was brilliant, crammed with references, strategies and concrete advice and guidance about taking artistic […]

‘The walls impose a simplified identity on those who cannot cross them. You are either from here or there. You are either one of us or one of them, the walls allow for no nuance, no mutually agreed apon story. […] 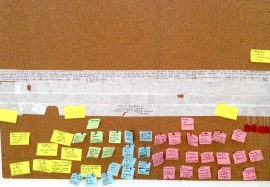 The R&D project blog for Through A Wall, where I attempt to unravel what has happened so far, what I’m working on and learning – and where this project is now heading. Includes recent work as resident artist at Blast Theory.