Ben Bridgens set me the task of creating bolted structures using a layer of thin veneer and a layer of fibre glass. This is the same combination as explored in previous experiments but this time no glue is used to […]

I have been exploring exciting structures that will move and change under wet conditions. Work at Newcastle University with engineer Ben Bridgens and researcher Artem Holstov, demonstrates the amazing potential of this technique which involves the bonding of thin layers […]

This week I worked with engineer Ben Bridgens to test the responsiveness of the panels we created. When moisture was applied, the veneer panels which are laminated to fibreglass, could be seen to slowly move and curl. As they dried […]

This week we began work on hygromorphic structures. In the same way that a fir cone opens and closes to release seeds, these structures will move in damp conditions. I worked with Dr Ben Bridgens to create a series of […] 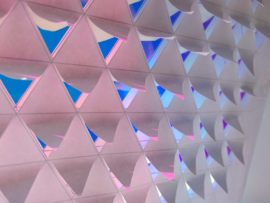 This blog records an exciting collaborative project exploring dynamic materials that respond to changes in environmental conditions. Working with engineers we will create a series of prototypes over the next 8 months and explore their sculptural and architectural potential.